Professor Atuahene has varied experiences in the field of law and international development. During law school, she worked as a legal consultant for the World Bank and as a human rights investigator for the Center for Economic and Social Rights, where she received Amnesty International's Patrick Stewart Human Rights Award for her work with human rights organizations throughout South America.

After law school, Professor Atuahene was in South Africa as a Fulbright Scholar. She served as a judicial clerk at the Constitutional Court of South Africa, working for Justices Madala and Ngcobo. She then practiced as an associate at Cleary, Gottlieb, Steen & Hamilton in New York, where she focused on sovereign debt and real estate transactions.

Professor Atuahene joined the Chicago-Kent faculty in 2005. She teaches Law, Policy and International Development; Property; Trusts and Estates; and International Business Transactions. In 2007 she was selected to become a Faculty Fellow at the American Bar Foundation (which is a socio-legal think tank based in Chicago), and in 2016 she was promoted to Research Professor.

In 2008 she won the Council on Foreign Relations International Affairs Fellowship and worked with the South African Director General of Land Affairs and his staff. Her most recent book, We Want What's Ours: Learning from South Africa's Land Restitution Program, is based on 150 interviews she conducted of program beneficiaries. She also directed and produced a documentary film about one South African family's struggle to reclaim their land. Professor Atuahene won the Law and Public Affairs Fellowship and was a Visiting Assistant Professor at Princeton University for the 2011–12 academic year. Most recently, she won a National Science Foundation Grant for her new book project about squatters in Detroit.

From reparations to dignity restoration: The story of the Popela community, 18 African Human Rights Law Journal 654 (2018) (with Sanele Sibanda).

The Importance of Conversation in Transitional Justice: A Study of Land Restitution in South Africa, 39 Law and Social Inquiry 902 (2014).

Paying for the Past: Redressing the Legacy of Land Dispossession in South Africa, 45 Law & Society Review 955 (2011).

Property Rights and the Demands of Transformation, 31 Michigan Journal of International Law 765 (2010).

Things Fall Apart: The Illegitimacy of Property Rights in the Context of Past Theft, 51 Arizona Law Review 829 (2009).

Lack of Communication is an Injustice in Land Restitution, Mail and Guardian (July 18, 2014).

Haiti: Has God Turned His Back on the Country?, Huffington Post (2010).

We Need to Anticipate Terrorists, Not React to Them, Huffington Post (March 18, 2010). 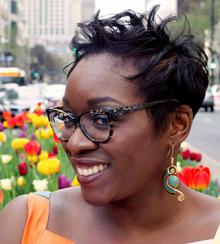