Mar Hicks is a historian of technology, gender, and labor, specializing in the history of computing. Hicks’s book, Programmed Inequality (MIT Press, 2017) investigates how Britain lost its early lead in computing by discarding the majority of their computer workers and experts--simply because they were women. Their current project looks at transgender citizens’ interactions with the computerized systems of the British welfare state in the 20th century, and how these computerized systems determined whose bodies and identities were allowed to exist. Hicks's work studies how collective understandings of progress are defined by competing discourses of social value and economic productivity, and how technologies often hide regressive ideals while espousing "revolutionary" or "disruptive" goals. Hicks is also co-editing a volume on computing history called Your Computer Is On Fire (MIT Press, 2020). They run the Digital History Lab at Illinois Tech and maintain a site about their research and teaching.

History and historiography of science and technology

Society for the History of Technology

Special Interest Group on Computers and Information in Society

2018 PROSE Award for History of Science, Technology, and Medicine (for Programmed Inequality)

2018 Sally Hacker Prize Winner, from the Society for the History of Technology (for Programmed Inequality)

Associate Editor for the IEEE Annals of the History of Computing

Arthur L. Norberg Travel Grant Award to the Charles Babbage Center on the History of Computing, 2013

Hicks also occasionally contributes articles and op-eds to newspapers and magazines, which are linked here.

Your Computer is On Fire, a co-edited collection, MIT Press (2021)

“The Long History Behind The Google Walkout”The Verge (November 2018)

"When Winning Is Losing: Why the Nation that Invented the Computer Lost Its Lead"IEEE Computer (October 2018)

"Against Meritocracy in the History of Computing,"CORE: The Magazine of the Computer History Museum (2016, starts on p. 28)

"Only the Clothes Changed: Women Operators in British Computing and Advertising, 1950-1970,"IEEE Annals of the History of Computing 32, no. 2 (October-December 2010)

"Meritocracy and Feminization in Conflict: Computerization in the British Government" in Gender Codes: Why Women Are Leaving Computing, ed. Thomas Misa (IEEE-CS Press/Wiley, 2010)

"Repurposing Turing's Human Brake."IEEE Annals of the History of Computing 30, no. 4 (October-December 2008)

Hicks is currently working on a new book about the prehistory of transgender algorithmic bias, the intersections between queerness and resistance in the history of digital computing, and the uses of early computing history for understanding our present technological moment. 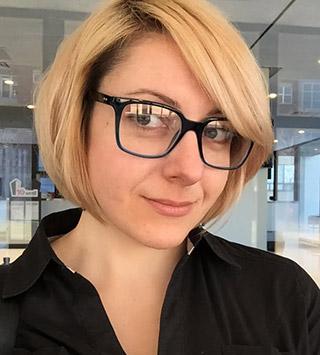 The breathless reactions to ChatGPT remind Mar Hicks, a historian of technology at the Illinois Institute of Technology, of the furor that greeted ELIZA, a pathbreaking 1960s chatbot that adopted the language of psychotherapy to generate plausible-sounding responses to users’ queries. ELIZA’s developer, Joseph Weizenbaum, was “aghast” that people were interacting with his little experiment as if it were a real psychotherapist. “People are always waiting for something to be dazzled by,” Hicks said.

“I think it’s appealing the same way that a game of chance is appealing, or a party game,” said Mar Hicks, associate professor of history. “Where there’s some level of uncertainty about what’s going to happen.”

The pattern of discriminatory pay stretches back to the birth of computing. Women programmed the first electronic computer, the ENIAC, without the help of high-level languages or floating-point arithmetic, and performed ballistics calculations at the raw binary level. This would be fiendishly difficult for modern software engineers. A Illinois Institute of Technology study showed that women hardware operators in the United Kingdom during the same era were paid less for supposedly “monotonous” and “routine” machine work while the men doing the “clean and cerebral” calculations on that hardware were handsomely compensated. The pay follows the person, not the skill, and certainly not the merit.