From Set Design to Aerospace Engineering 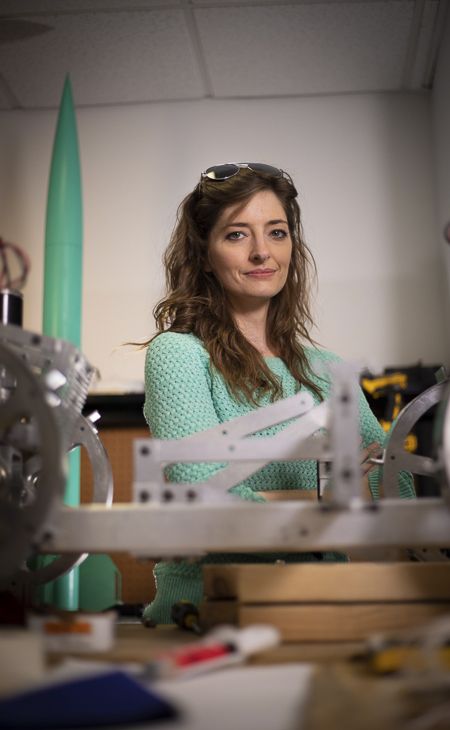 Andy de Fonseca is 35 years old, a theater graduate, a mother, and now well on her way to becoming an aerospace engineer.

As a kid, Andy de Fonseca loved space but never considered pursuing a career in STEM. After getting degrees in theater, cinematography, and history and taking a job in marketing, Andy started volunteering at Adler Planetarium. “It was great teaching people of all ages not only about space science but that they have a place in space as well,” she says.

Andy took that message to heart, founding the Chicago branch of The Planetary Society, an international group founded by Carl Sagan, Louis Friedman, and Bruce Murray, and growing it into the second-largest branch in the world. Then in 2016, after watching SpaceX's Falcon 9 land on the Of Course I Still Love You drone ship, she started researching aerospace degrees. “It was the coolest flippin' thing I had ever seen,” Andy says, “I had to be part of that world.”

Between raising her young daughter and working as a wedding photographer, Andy started her time at Illinois Tech reluctant to join extracurricular activities. But after a great experience working with the Illinois Tech NASA robotics mining team, Scarlet Spacehawks, Andy is now the mechanical lead for the team. She has also founded two new clubs, bringing hands-on rocketry and flight maintenance experience opportunities to Illinois Tech students.

After graduation, Andy wants to work in the aerospace industry. “Figuring out propulsion to get into deep space would be so baller to work on and help figure out, working on any component for the lunar base itself would have me geeking out,” says Andy. “A future employer could put me on solving cup holder issues, and I'd make the best, most glorious holder in the galaxy.”