Carly A. Kocurek is a cultural historian specializing in the study of new media technologies and video gaming. She is the author of two books, Coin-Operated Americans: Rebooting Boyhood at the Video Game Arcade, which covers the early rise of video game arcades in the U.S., and Brenda Laurel: Pioneering Games for Girls, a consideration of Laurel’s career as researcher and game designer. Her articles have appeared in numerous scholarly journals, including Game Studies, The Journal of Gaming and Virtual Worlds, Technical Communication Quarterly, and Visual Studies, among others. With Jennifer deWinter, she co-founded and co-edits the Influential Game Designers book series for Bloomsbury.

She is also a game designer specializing in experimental and serious games. Paste Magazine called her game Choice: Texas “one of the best games of 2014.” She served as lead writer and producer for The Spider’s Web, an alternate reality game embedded in a peer-reviewed journal article. In 2020, her print-and-play card game, Happy Ecosystems, was awarded the positive impact award for the Indiecade Climate Jam.

Understanding games as a cultural form, including in particular the intersections of games and gaming practices with gender, socioeconomic status, and other facets of identity

Understanding the role of play and games in daily life

Designing and developing games for serious or educational purposes, particularly games that address complex or uncomfortable topics or that aim to intervene in social problems

Jennifer deWinter, Carly A. Kocurek, and Randall Nichols, “Taylorism 2.0: Gamification, Scientific Management, and the Capitalist Appropriation of Play.” Journal of Gaming and Virtual Worlds 6, no. 2 (2014). pp. 109-127.

Kocurek is currently pursuing a large-scale project to document and study the games for girls movement funded by the National Science Foundation. Her other current projects include co-authoring a book, tentatively titled Ultima: The Art of Worldcraft with Matthew Thomas Payne about the Ultima game franchise for the University of Michigan Press; and co-editing a volume on the historiography of game studies as a research field.

Her other current projects include two experimental games; one is intended as a tool for processing grief, and the other is an experiential puzzle game distributed by mail. 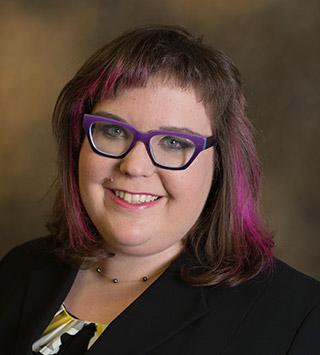 “I think humor is great when you’re softening how something feels,” says Carly Kocurek, professor of digital humanities and media studies. “You’re not going to learn if you’re angry and frustrated about your encounter with this thing.”

“The people who grew up playing these games are adults now—there’s a lot of nostalgia for them,” Illinois Tech professor Carly Kocurek said in an article about her research into the Games for Girls movement. “We’re starting to see that a lot of the folks that were designers and influential during the Games for Girls movement have become leaders. We have a radically different landscape for games now, so ‘Games for Girls’ sounds almost antiquated—because of course people are making games for many different audiences—but that wasn’t always the case.”