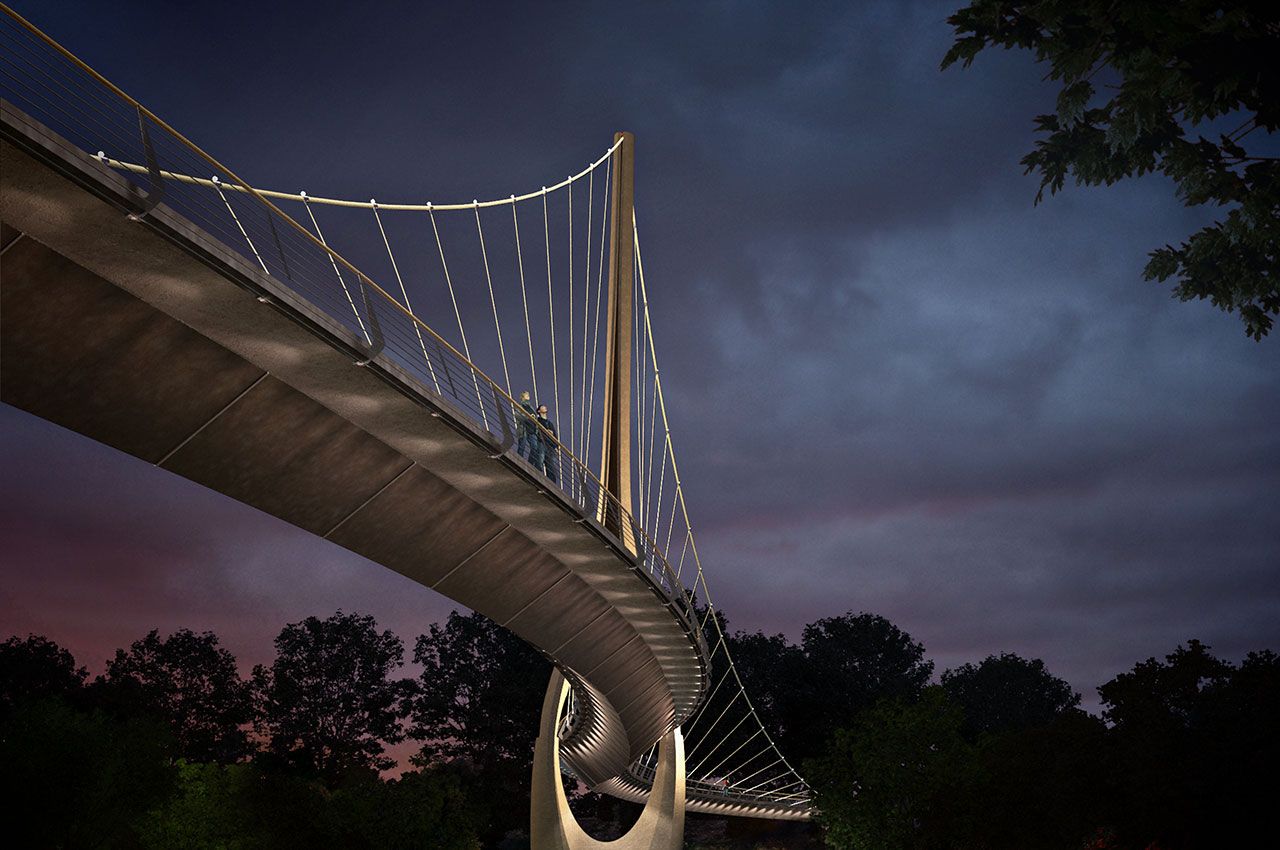 Snaking its way across the Scioto River—connecting Dublin, Ohio, and its historic district with a newly developed commercial area—is a 760-foot, single tower, S-shaped suspension bridge designed by Paul Endres, assistant professor at Illinois Institute of Technology's College of Architecture, and his firm, EndreStudio. According to Endres—who specializes in structural engineering and form as a professor—it’s the only example of such a bridge design in the world.

“We did a lot of research; there are a lot of similar ones with two towers, but I don’t know of any that are done with just one,” he says. “That one tower is what gives that dramatic hanger cable-flare pattern at the end of the bridge.”

While Endres’s design is a distinct piece of architecture and structural engineering, its aesthetics were largely bound by the complicated nature of the river it spans. The S shape of the bridge, for example, was informed by the fact that the two streets the bridge must connect are not offset from one another.

Similarly, for cost-saving purposes, the designers had to choose between using only one of two towers to support the bridge. However, given that a two-tower design would require one of the towers to be erected in the deepest section of the water, Endres decided instead to make a single-tower design work.

Further distinguishing the bridge are its hanger cables, which are attached on only a single side of the bridge and hold up the structure along the inside radius of both curves. It makes the bridge stylistically unique while allowing for unencumbered views on both sides of the bridge. It also makes it an engineering challenge.

“The geometry is quite complex. The overall shape of the suspension cable has to be form found so that it will be based not only from the vertical support of the hanger cables, but also from the horizontal components; typically a suspension is only in a vertical plane,” says Endres. “Additionally, if you only support the bridge on one edge, the entire bridge normally wants to twist. So, across the span we changed all the heights of the cable attachment points to reduce torsion.”

Endres says that, while the bridge design was heavily dictated by the physical constraints of the site, his team made aesthetic decisions to blend the bridge more with its surroundings. The color of the bridge, for example, matches the hue of the Indiana limestone used on a nearby historic bridge.

“The bottom of the teardrop has a reflection off the arches that are farther downstream; if you were to flip [the shape] over you get the shape of the arch beyond,” says Endres. “If you look at the two bridges side by side, the historic one and the new one, although they’re completely different, they feel as though they’re from the same language and same vocabulary, just from different times.”