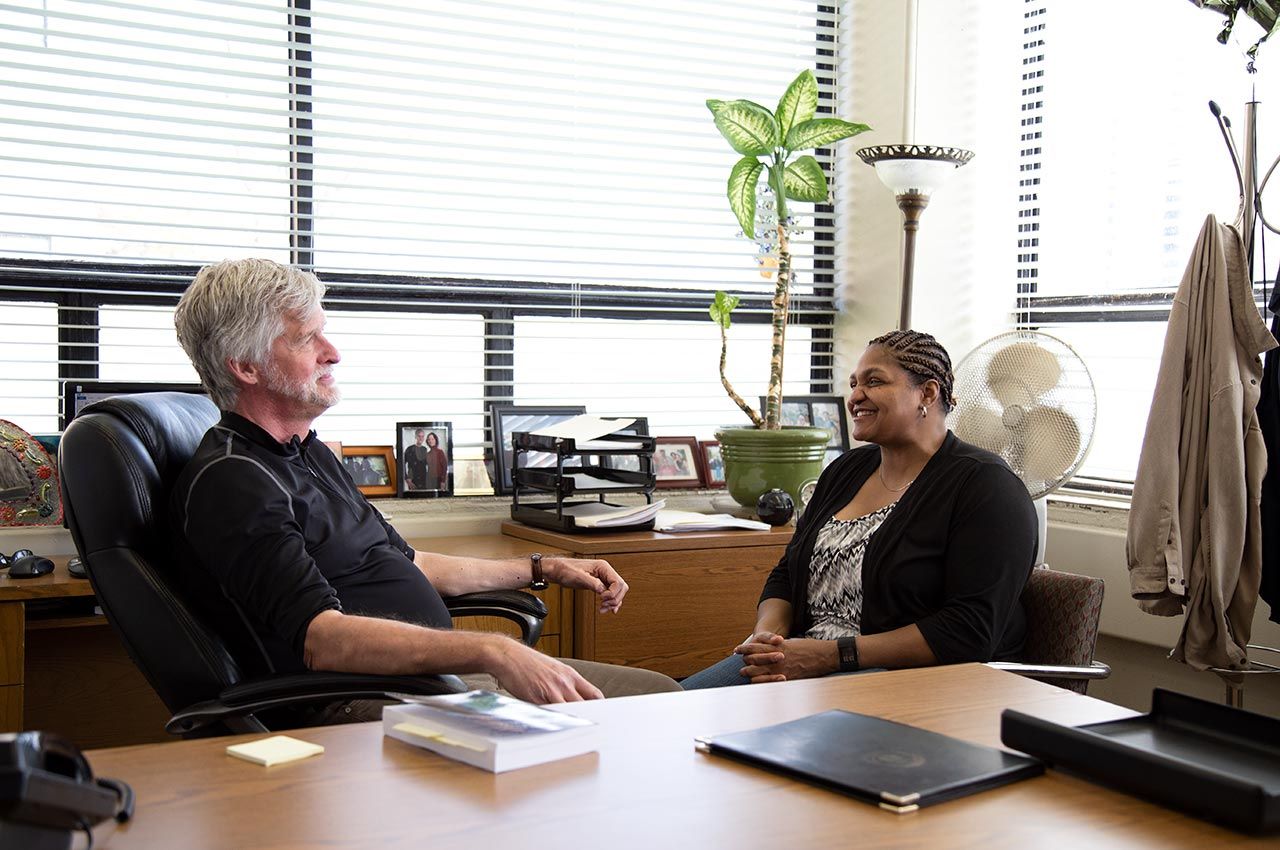 Distinguished Professor of Psychology Patrick Corrigan and Senior Research Associate Lindsay Sheehan are now in the last year of a five-year study on the potential of a new “peer navigator” resource to improve diet and exercise outcomes for African Americans with serious mental illness living on the South Side of Chicago. The study, titled “Promoting Healthy Lifestyle Behaviors to Address Obesity Related Complications of African Americans with Severe Mental Illness Using Peer Navigators,” is funded by a $2,392,826 grant from the National Institute on Minority Health and Health Disparities (NIMHD), which was awarded in January 2016.

The study is one of several underway at the Chicago Health Disparities Center at Illinois Institute of Technology, where Corrigan serves as director and Sheehan as associate director.

“People with serious mental illness get sick and die 20 years before everyone else, and if they’re of color it’s even worse,” Corrigan says. “Another problem is obesity, which is one of the biggest concerns for people getting sick, and even bigger for people with serious mental illness and people in the black community. We made the focus [in our grant application] that we wanted to focus on diet and exercise—the innovative part is the peer navigator.”

The peer navigators involved in the program are members of the same demographic as the study participants who themselves have adopted successful diet and exercise habits and are able to share what they’ve learned with others.

“The navigators are peers in two ways,” Corrigan says. “First, they are people in recovery with serious mental illness—‘I’ve been where you sit’—and are examples of hope and goal attainment. Second, they are typically from the same ethnic group, so in the diet and exercise study peers are black people with recovery.”

Earlier studies at Illinois Tech, in collaboration with Chicago-area clinical partners, have included peer navigators. For example, a 2013–2016 study conducted by Corrigan and Sheehan, titled “Integrated Health Care for African Americans with Mental Illness Who Are Homeless,” utilized peer navigators to help get people to their health care appointments. That project was also funded by a grant from NIMHD, totaling $1,214,548.

Corrigan says there are unique benefits to including a peer navigator as a resource, versus working with a traditional counselor or case manager.

“The navigator works in the world helping the person actually get to the places they need to go to achieve their goals,” he says. “For health, that means taking the person on the West Side for the cardiac appointment, then to the North Side to see the podiatrist, then downtown to the pharmacy, then back out to the West Side for lab tests. The very real task of walking someone around supportively is essential to navigating. In the process, the person may ask the navigator to come in to the appointment or to advocate for them.”

The components of Corrigan and Sheehan’s diet and exercise study were developed through a 15-month community-based participatory research program led by Corrigan and Sonya Ballentine, a project manager with the Chicago Health Disparities Center. The program invited members of the target population to be a part of the planning process to ensure the intervention offered would be as relevant to study participants as possible. African Americans living with serious mental illness on Chicago’s South Side face many unique diet and exercise barriers, Corrigan says; for example, many members of this population live within food and activity deserts, meaning there is a lack of access to grocery stores selling healthy foods in addition to a lack of access to safe and suitable outdoor spaces for exercise.

“[Factoring in those barriers] takes these health issues and puts them in the social justice perspective,” Corrigan says. “You live in parts of the city where you can’t get good food or where you can’t go out and walk. [Within our study] we have this peer navigator that goes in and helps you deal wherever you live. The essence of the peer navigator is, ‘I see you in your space, I come to your community and see you in your neighborhood, park, grocery store.’”

In light of the COVID-19 pandemic, Corrigan and Sheehan have had to adjust the parameters of the peer navigator program within their diet and exercise study as they continue working with their final cohort of participants. Given social distancing guidelines in the city of Chicago and the state of Illinois, sending peer navigators to meet with study participants in person is not feasible. Participants are instead connecting with peer navigators by phone, which has required getting participants access to phones in some cases.

“We are helping participants obtain a free government phone if needed,” Sheehan says, “[but] government-sponsored plans only allow for minimal minutes per month. For those who do have a phone, we show them how to take advantage of phone and internet providers who are upgrading plans to unlimited minutes and providing free Wi-Fi during the pandemic. Many of them don’t know about it or need help getting set up with it.”

After the data collection for the diet and exercise study concludes at the end of 2020, Corrigan and Sheehan will spend 2021 analyzing their findings and sharing that information. They also plan to write more grants with the goal of securing funding for future projects that will look at the benefits of incorporating peer navigators into interventions for other underserved groups.