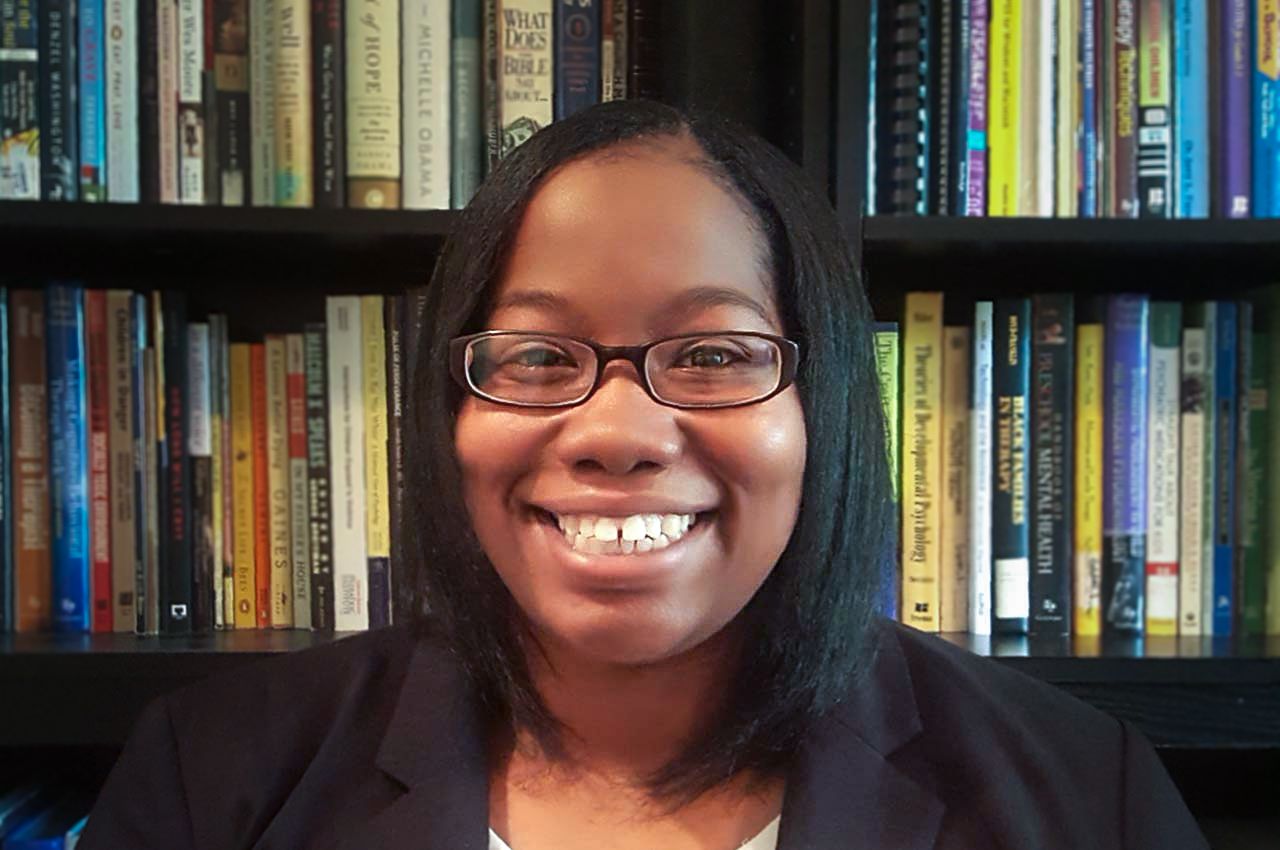 New research from recent Illinois Institute of Technology clinical psychology Ph.D. graduate Lynda Gibson explores the link between community violence exposure and mental health in children ages three to five, finding a link between exposure to violence and emotional and behavioral symptoms including aggression, depression, separation anxiety, and difficulty sleeping. The findings could have implications for the development of intervention programs aimed at supporting children exposed to community violence.

Gibson completed the study as part of her Ph.D. dissertation, gathering information from 32 families that have young children and live in Chicago’s Bronzeville, Englewood, Hyde Park, and South Shore neighborhoods. For seven consecutive days, parents used their mobile devices to complete 25 surveys that asked questions about their child’s community violence exposure, emotions, and behaviors within that timeframe. What was particularly innovative about the study, Gibson says, was that it was one of the first to “look at the link between community violence exposure and child mental health as events were unfolding in real time.” 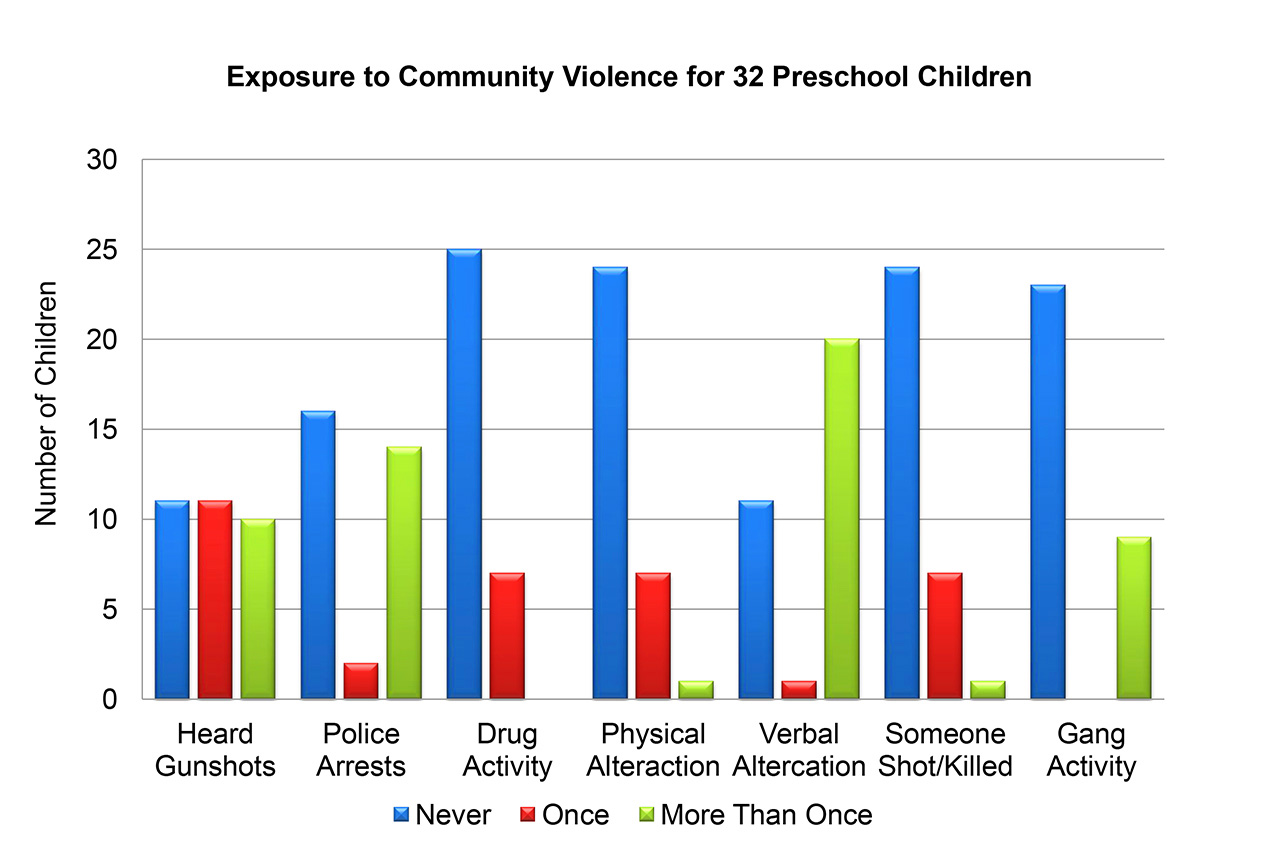 “By the ages of three to five, some of these children had witnessed gang activity on multiple occasions, had frequently heard gunshots, and some had even witnessed someone being shot or killed,” Gibson says. “In addition, at the time that families began this study, 44 percent of children were exhibiting emotional symptoms such as anxiety, and 38 percent of children were exhibiting behavioral symptoms such as aggression.”

During the seven-day study, the parents of 14 of the children reported their child had not been exposed to community violence, while the remaining 18 children were exposed to a combined total of 152 community violence events. Exposure included hearing gunshots, seeing a person being arrested, or witnessing gang activity.

Gibson describes the results of her study, the amount of exposure to violence and the children’s responses, as “alarming—especially because the children were so young.”

“The link between community violence exposure and subsequent emotional or behavioral problems increased if the situation occurred near the child’s home or involved someone that the child knew, such as a caregiver or relative,” she says.

The data from Gibson’s study can help inform the development of future interventions for children impacted by community violence.

“The present findings highlight the urgent need to develop clinical interventions that are geared toward early childhood,” Gibson says. “In addition, the continual presence of stressors in inner-city communities emphasizes the need for a more in-depth examination of how risk factors such as chronic community violence may impact the social and emotional development of young children.”

Gibson also points out that some families are able to cope amid exposure to community violence, highlighting factors that have been proven to help families succeed.

“Despite the challenges associated with living in inner-city communities and the high rates of community violence exposure, many individuals who live in these areas have found ways to cope with the hardships that occur and often utilize protective factors, which aid in resiliency,” she says. “Positive family functioning, religious supports, and extended family have all been identified as protective factors for many families such as those who participated in this study. Working with families to utilize these protective factors and identifying a way to integrate these into community-based programs or interventions may be a key strategy to help caregivers and their children who are exposed to community violence.”

The Illinois Head Start Association provided Gibson assistance in connecting with the families for her study, and her relationship with the organization continues. As part of the project, Gibson trained several Head Start staff members “on how to create a more trauma-informed learning environment and how to recognize when a child may be dealing with community violence or trauma exposure,” she says.

Gibson recently completed a clinical internship with the Dallas Independent School District’s Department of Psychological and Social Services. She will begin a postdoctoral fellowship focused on child trauma with the University of Chicago’s Department of Pediatrics in early August.