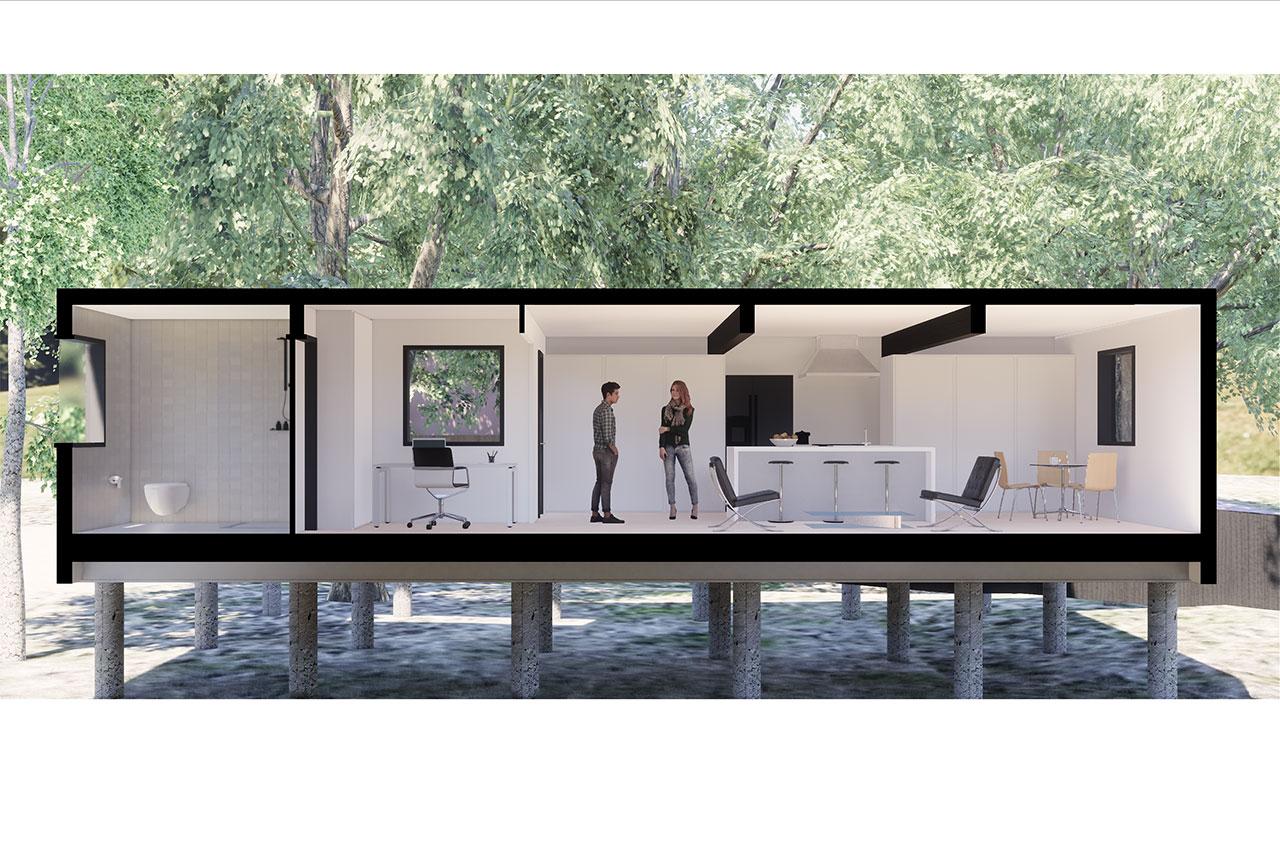 Nestled just west of the Skokie Lagoons, the North Shore village of Winnetka, Illinois, exists in one of the most flood-prone areas in the greater Chicago area. Resting in that former swamp is a plot of unused land, devoid of any home or structure, owned by engineer and Illinois Institute of Technology alumnus Robert B. Footlik (IE ’68) and his sister Janice B. Footlik (M.S. PSYC ’72), another Illinois Tech graduate.

“The water can rise up to two feet in as little as 15 minutes, so the parcel [of land] is literally underwater periodically,” says Robert Footlik. “As you can imagine, that makes it doggone hard to sell. So what can we do to that parcel?”

In what Footlik describes as “a fit of rational thought,” he considered Farnsworth House—Ludwig Mies van der Rohe’s iconic Modernist weekend retreat built for prominent Chicago nephrologist Edith Farnsworth. After all, Farnsworth House itself was built on a floodplain, and with a foundation composed of pilings, it has a smaller impact on the soil than a traditional home. Further, given Footlik’s deep roots at Illinois Tech, it only made sense to look toward Mies’ style.

Rather than reaching out to an architecture firm for a design, Footlik looked to Mies Campus and devised Farnsworth Redux, a design competition and learning experience open to students at Illinois Tech. “I’m an engineer and I know my limitations,” says Footlik. “My fellow classmates who were students in Crown Hall had a greater appreciation for Mies and a better understanding of things like aesthetics than I would have.”

With the help of student Adam Fogel (M.ARCH. candidate), Footlik got the word out for the competition and provided prospective competitors with a design brief: design a single-story, 800-square-foot home inspired by Farnsworth House using sea-land shipping containers. What’s more, the total budget should fall under $100,000 (not including furnishings), and the structure should accommodate the possibility of adding a second story in the future. In all, 22 projects were submitted, with 10 projects receiving honors (as well as $1,000 cash prizes each), and one project winning the grand prize (and $5,000). The remaining participants all received $100 Amazon gift cards.

But for as lauded as Farnsworth House is, it is not without its faults, many of which Footlik’s design contest addressed. Most notably, a bitter and public feud between Farnsworth and Mies following the building of the house revealed that the project went well over an already high budget. But by upcycling steel shipping containers as the basis for their designs, students were able to circumvent this shortcoming.

For one, shipping containers are cheap. An overabundance in the United States means 20- and 40-foot containers can be purchased for somewhere between $1,500 and $5,000 each. Using a handful of them together also offers a degree of modularity, allowing designers to easily carve out private spaces and make future additions at a low cost.

“Even [students who] used five basic 20-foot containers had a great deal of creativity in them,” says Footlik. “And it was simple creativity, like moving three containers back and two forward so they slid together and had a small overlap. It turned it into a house with a wing for living and a wing for entertaining with a carport in front.”

The design Footlik is referring to belongs to Sarah Stephens (ARCH 1st year) and Blake Hageman (ARCH 4th year), the duo who won the Farnsworth Redux grand prize. “Edith Farnsworth ended up writing about how she felt like a prisoner in her own house because there was no privacy, so you know, even though we tried to make it an open and comfortable space, we also separated the private spaces so we have a chance to retreat and have a chance to not be exposed to your neighbors,” says Hageman.

Shipping containers have their downsides, too. While they’re rigid in their unmodified state, containers lose some of their structural strength when their side walls are cut, which requires extra framing and increases complexity and cost. Minimizing that challenge requires moving windows and openings to the ends of the containers, where they’re strongest. “We definitely reduced the overall cost of it by utilizing that method,” says Stephens.

According to a 2018 report from the Illinois Housing Development Authority, less than 5 percent of the housing stock in North Shore villages such as Winnetka, Glencoe, and Lake Bluff are considered affordable. As such, Footlik was insistent on retaining an element of affordability and accessibility to the final project, opening up the area to new kinds of tenants.

“Now the question becomes, ‘Who will want to live there?’ And the answer to that is surprisingly quite a few people,” says Footlik. “Empty-nest couples, who have vacation homes elsewhere but want to have ties to the Chicago area. Another category would be millennials; an affordable or minimal house for them to start with that can be easily and cheaply added onto as the family increases. Another client could be somebody worried about a special-needs child. You don’t want them in a high-rise away from nature, so what could be better?”

As of now, Farnsworth Redux is solely a learning experience meant to give Illinois Tech architecture students an opportunity to tackle projects outside the university during their spring break. “Students have so much creativity, but sometimes we don’t have the proper channels to hone that creativity,” says Fogel. “Competitions like these allow students to think critically and quickly to find a solution they think is best.”

Still, Footlik hints at the possibility of a physical product deriving from the competition, noting, “If the municipality and the building inspectors will cooperate, then it’s possible for us to do something like this.”