Institute of Design Students, Faculty Work with Community to Imagine the Future at Boxville 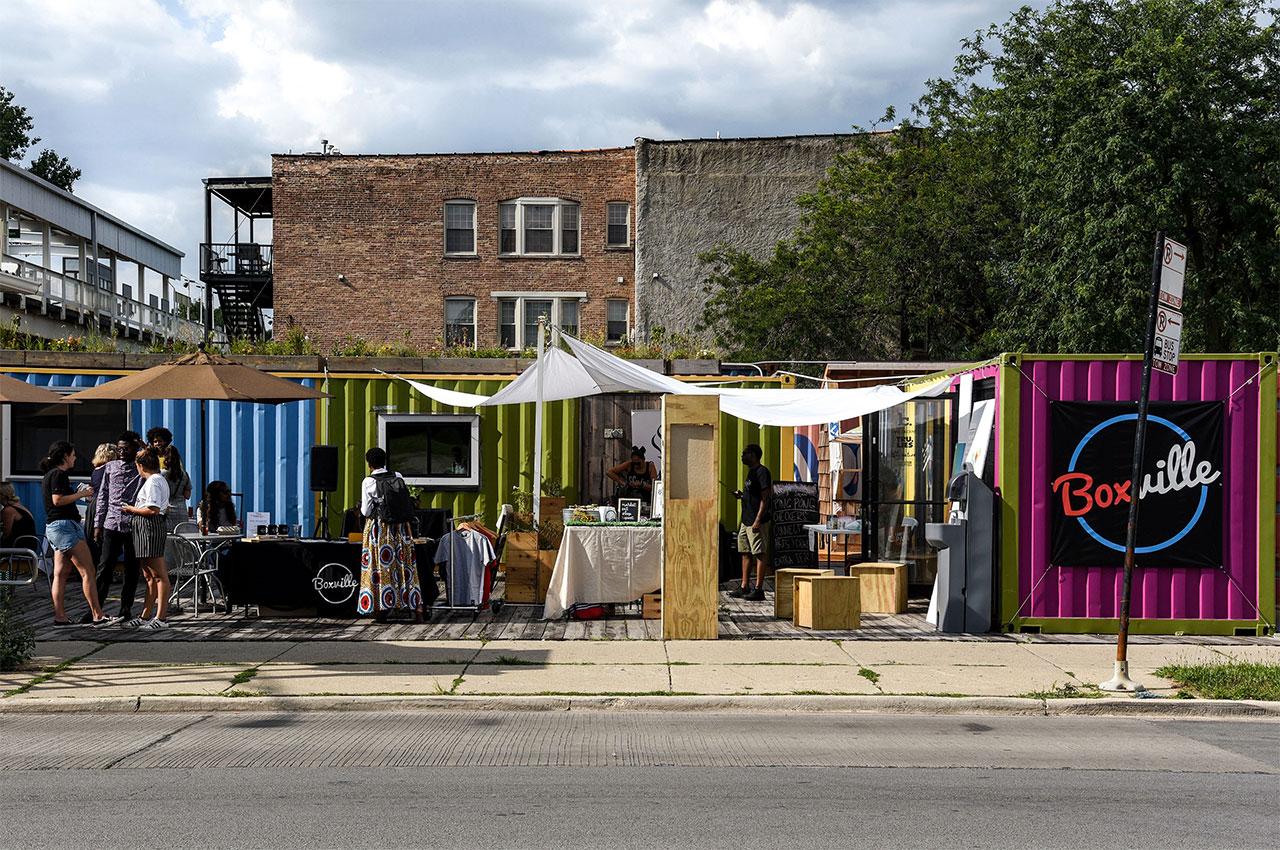 It’s mid-July in Chicago and Chris Rudd, an adjunct professor at Illinois Institute of Technology's Institute of Design, is standing with two of his students in the 90-degree heat talking to Talibah Floyd, proprietor of You’re a Smart Cookie, which makes vegan cookie dough. The small business operates out of Boxville, a community space built from upcycled shipping containers that is home to several small businesses next door to the CTA Green Line stop at 51st Street, the southernmost edge of Bronzeville.

“It’s been pretty great. I like the way [Boxville] is organized and the variety of vendors,” says Floyd. “But I want more people to know about it, and show up.”

After IIT Institute of Design moved to Illinois Tech’s Mies Campus in late 2018, Studio Professor Martin Thaler wanted his product design class to create something for a client within one mile of its new home. In spring 2019 Thaler’s class built a system of modular, box-shaped seats for Boxville that could function as seating and for signage and performances. The idea was simple, at least in theory: connect Boxville—which is run by Urban Juncture, a Bronzeville-based community development group—to surrounding communities through resourceful product design.

As things often do in the world of human-centered design, the project evolved.

To further awareness and engagement at Boxville, Thaler’s product workshop also provided a roadmap of concepts, including installing a design lab at Boxville. So, over the summer, Rudd, three Master of Design students—Matthew Impola, Justin Walker, and Yuqing Zhou—and Denis Weil, ID dean, set up a design lab at Boxville called 51 Futures to pursue the idea.

Initially, the idea was to study usage of the seating system in a “living lab” setting to see how the design could be improved, but the team realized the potential that 51 Futures had to work directly with the community, and quickly reconsidered their strategy.

“Living labs tend to be very extractive—they go into communities, they get what they need out of them in terms of research and knowledge, they take it back to their space, and then use it for their own benefit,” says Impola. “We’re trying to flip that model on its head, and come in and make sure we’re adding value to the community we’re in.”

“We want to know how we can share design with communities and work with communities using design practices and methods. Developing cooperative approaches like this will advance design as a whole,” adds Rudd.

Rudd and the students devised exercises to introduce design frameworks and key design tools, like POEMS (People, Objects, Environments, Messages, Services), value maps, and future statements. ID was designing with, not for, the vendors and patrons of Boxville.

“We don’t choose what the future is here. We’re going to keep presenting what they say, and that will help us better understand the different entities in the area,” says Rudd. “Every activity we’ve done, we’ve tried to be very intentional about exactly what framework or methodology we’re using.”

There have been a few outcomes of ID’s cooperative relationship with the Boxville vendors. For one, as a result of feedback from their patrons and vendors, ID modified the box seating system to transform into a stage to accommodate performances, poetry readings, and lectures. The need for a signpost for the space also arose, which the ID team implemented by the end of its time at Boxville.

The ID team also identified key areas where Boxville could potentially expand and improve experiences for vendors, patrons, and the community in which it sits, which were synthesized by Boxville participants through exercises such as bullseye targeting. Rudd says these ideas are being shared with Urban Juncture.

Ultimately, ID was able to share design tools and activities with Bronzeville neighbors, demonstrating how tapping a community’s creativity can inspire effective ideas and transform them into new realities.

“We try to create something that people can take away. We think about how we can level the playing field so we’re not the experts, but partners. Often, at the beginning, our partners have no idea what we’re talking about,” says Rudd. “But in the end, we get folks saying, ‘I’ve never thought about this small thing in this big way.’”