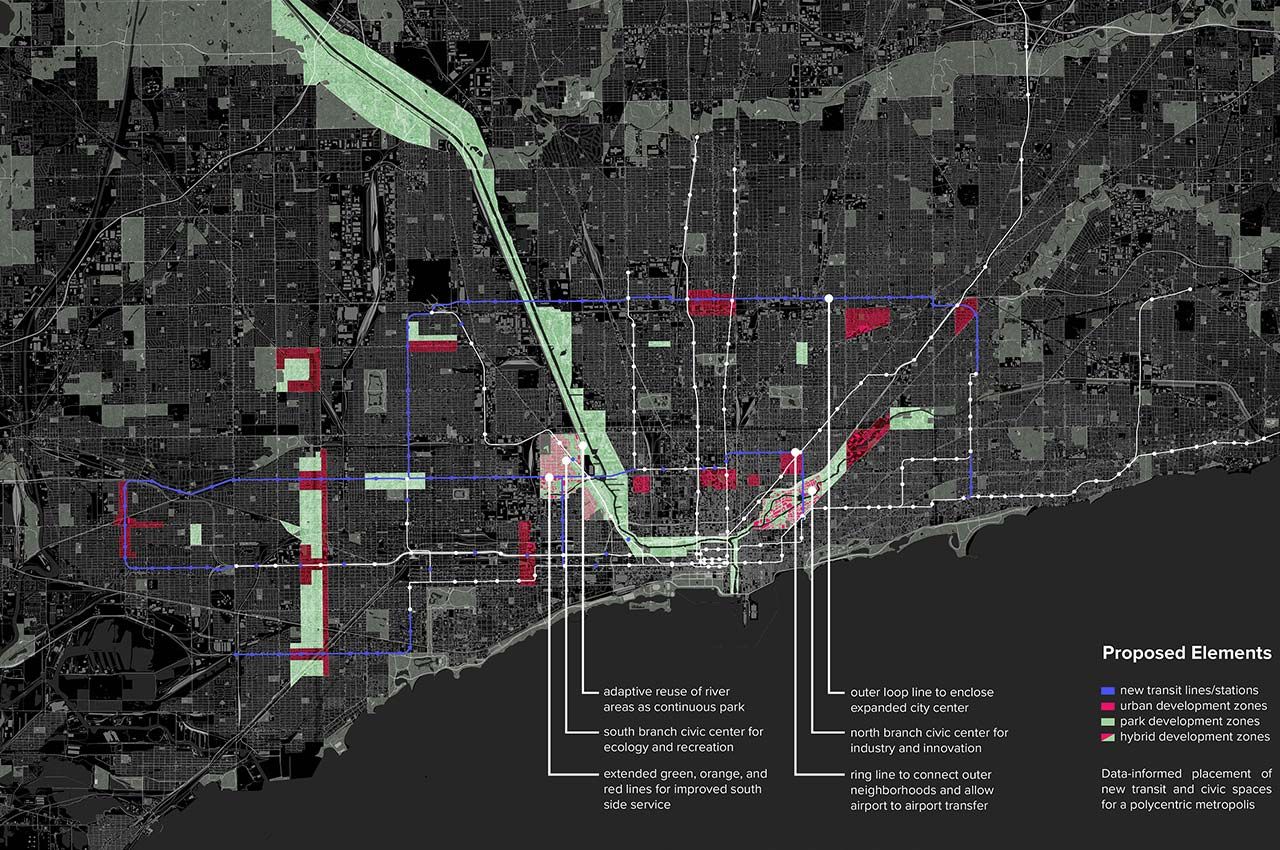 In 1909 the Commercial Club of Chicago funded the creation of Plan of Chicago––commonly called the Burnham Plan in reference to its lead author, architect Daniel Burnham––which proposed a six-point plan for improving the layout of Chicago in the face of rapid urbanization (in the 1890s the population grew by 600,000 people alone), informing the urban planning of the city over the coming decades.

Though Burnham’s plan is widely considered to be successful, the Chicago of the early twentieth century is wildly different from that of today. As such, the Chicago Architectural Club asked architects to reimagine the Burnham Plan to address the problems of twenty-first-century Chicago for the 2020 iteration of its biennial Burnham Prize competition.

“We realized pretty quickly that those six points in the Burnham Plan neatly fit into two categories,” says Hageman. “Three of those points related to transportation—they were talking about highways and moving goods and people throughout the city—and then the other three were talking about quality of life, public spaces like the lakefront.”

As city needs have changed since Burnham’s day, so too have methods for urban planning, which is why Allen and Hageman took a deeply data-driven approach. Using data from the United States Census Bureau and Chicago city logs, the two created a map of Chicago detailing where access to transportation and “civic life”––proximity to health care, education, culture, government, recreation services––were highest and lowest in the city.

“Mapping it all out you can see the most underserved areas of the city,” says Allen. “We looked at those areas and thought the best way to address this problem is to extend public transit to reach out into those places and to extend public networks and commerce areas.”

As it exists now, virtually all of Chicago’s “L” trains cut through Chicago’s Loop, giving some areas of Chicago quick access to downtown, but leaving many other areas of Chicago disconnected from each other. To weave underserved areas together, Allen and Hagemen devised a system of concentric lines circling the Loop.

This includes an “Outer-Loop” branch that connects the neighborhoods just west of downtown with farther north neighborhoods such as Logan Square and Avondale and that extends south to improve access to neighborhoods such as Englewood and Back of the Yards. Another line would run far west of the city, north to south, connecting those neighborhoods on the outskirts of Chicago while simultaneously creating a direct airport connection between Midway and O’Hare.

“The lines were initially built to serve the economic industries, but the problem is if something happens in the Loop, for example the protests this summer, or with everyone working from home, the idea of a really concentrated urban center is not so resilient,” says Hageman. “On top of that, there’s no relationship between the neighborhoods that are right next to each other because there’s little to no transportation that goes between them. They’re totally disconnected from what’s happening in other parts of the city.”

In addition to the new rail lines are new public spaces and civic centers to provide more opportunities and resources to underserved areas. For example, formerly industrial space along the Chicago River would be adaptively reused as park space, while an expanded recreational and civic area would sit in McKinley Park.

“A city is a living organism that requires attention on all fronts in order to thrive, from the center to the outskirts. Our solution focused on a park network that grows along our neglected natural resource: the Chicago River,” says Allen. “We then implanted mixed-use development pockets in target areas based on where the data was telling us there were holes in the system. In the end, we wanted to suggest a concept that was light on resources but heavy on impact. Why not use existing infrastructural systems and social conditions to revitalize and reconnect people to places?”

The award was announced on October 13 in a virtual award ceremony. As first prize recipients, Allen and Hagemen will receive a $1,500 prize.