In February 2020 a passenger disembarked from the Diamond Princess cruise ship with flu-like symptoms and would go on to test positive for the novel coronavirus (COVID-19). By the time the rest of the travelers disembarked, hundreds of them tested positive.

In those early days of the COVID-19 pandemic, Brent Stephens and his colleagues modeled the spread of the virus on the Diamond Princess cruise ship, providing evidence that small airborne droplets were transmitting the virus, an essential insight at a time when most health organizations had not included wearing a face mask in their COVID-19 prevention guidelines.

As an indoor air quality researcher, Stephens says he had been skeptical of that omission. Then one of Stephens’s former graduate students, Parham Azimi (Ph.D. ENVE ’16), reached out. While at Illinois Institute of Technology, Azimi, who is currently a research fellow at the Harvard T. H. Chan School of Public Health, had worked with Stephens to build a model of how viruses move through spaces.

“We had developed this mechanistic model of viral emission, deposition, inhalation, control by ventilation, and inactivation, and we applied it to model influenza transmission in indoor environments,” says Stephens, who is a professor of architectural engineering and chair of the Department of Civil, Architectural, and Environmental Engineering at Illinois Tech. Azimi wanted to apply the model to the Diamond Princess cruise ship.

“We know the ship’s dimensions and space types, we know a lot about where people spent their time, and we have this pretty well-known record of cases over time,” says Stephens, so it seemed like a perfect option for a case study. But there were, and still are, many unknown factors about the novel virus.

For as many parameters as possible, Stephens, Azimi, and their colleagues calculated estimates based on the available data about the virus. Since that still left many unknown parameters, they ran more than 20,000 simulations, each using different assumptions. They then compared these to the actual COVID-19 case counts that were measured on the ship over time.

“We said, whichever ones line up pretty well with the actual case counts, we can include in our analysis,” says Stephens. “All the other ones are probably garbage so we’ll exclude those, because whatever assumptions we used were not reasonable assumptions.”

They considered different modes of COVID-19 transmission: infection as the result of people interacting with a surface that has the virus on it, infection from large droplets landing on a person’s mucous membrane, and infection from breathing in the virus expelled by an infectious person traveling over either short- or long-range distances.

Airborne transmission was considered long-range if it happened anywhere outside of the close contact zone, a mode that most health organizations at the time did not think happened very often.

But their model predicted infection was just as likely to occur from long-range transmission as from short-range, while surface transmission was less common than both. The results of their work were published in the Proceedings of the National Academy of Sciences in late February.

Long-range transmission had been dismissed because it was thought that the virus would spread primarily in droplets that were big enough that they would fall to the ground before leaving the close contact zone. But the model’s finding that significant long-range transmission best explained the Diamond Princess infection rates contradicted that assumption.

Since small droplets stay in the air longer, they can cause even more infections than large ones.   “That’s because you inhale small droplets when you’re in close range with someone and when you’re outside of close range,” says Stephens. “When you get up close to someone with a lot of perfume, you smell those compounds. The gas can move around the room, but you smell it really strongly right up close. Aerosols aren’t all that different”

On the Diamond Princess, passengers were quarantined to their rooms for two weeks while docked in Japan. Without the contribution of small droplet transmission, this could have been an effective measure to prevent spread. Instead, at least 19 percent of the ship occupants contracted COVID-19, many over the age of 60. The 712 documented infections resulted in 14 deaths.

The New York Times featured preliminary results from Stephens’s study in July 2020, and the health guidelines around COVID-19 prevention have shifted. “Now all of a sudden, the CDC is recommending ventilation in homes and air cleaning. The evidence is piling up around this over time,” Stephens says.

As public spaces start to reopen, Stephens has turned to using the model in other indoor building environments, determining minimum ventilation and air filter requirements. “It could have some big impacts on how buildings return to work and move forward,” says Stephens. 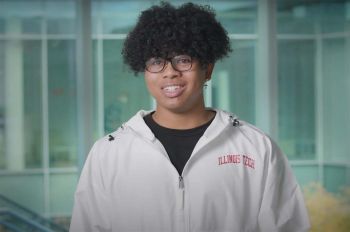