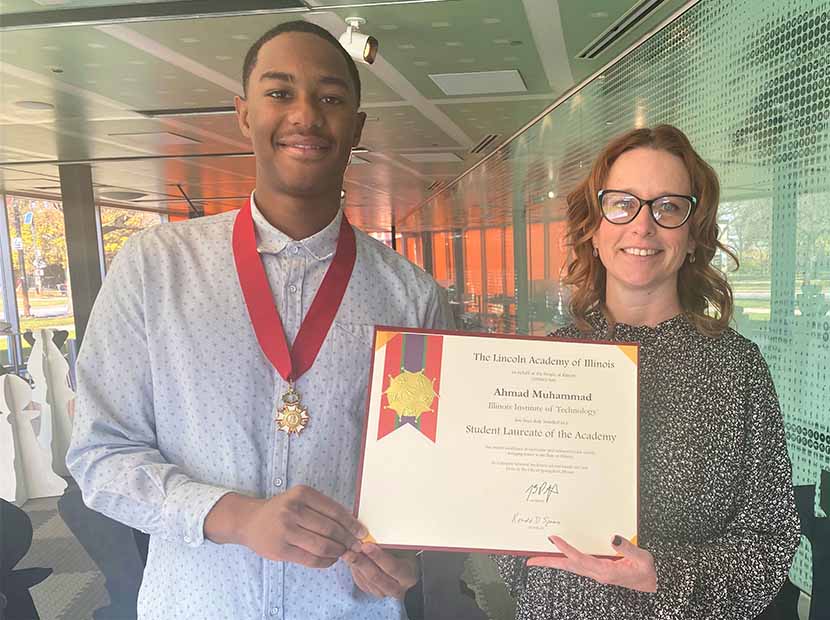 Ahmad Muhammad is the 2022 recipient of the Abraham Lincoln Civic Engagement award.

Ahmad is an outstanding co-terminal student, pursuing a B.S in Business Administration with a minor in Psychology and a M.S. in Marketing Analytics with a GPA of 3.85. In addition to his studies, Ahmad is an integral member of the Illinois Tech Men’s Basketball team.

Outside of his coursework at Illinois Tech, Ahmad founded the startup, Beyond the Sole, a human performance data company that leverages wearable technology and machine learning algorithms to optimize athletic performance, detect common movement patterns related to athletic injury, and assist in the recovery after injury within physical therapy practices.  He has also spearheaded events across the city of Chicago for the World Languages and Culture Club. His volunteer efforts include ChiGivesBack, where he has led efforts for toy drives, and redecorated classrooms at Tanner Elementary School. In addition, Ahmad has been an advocate for partnering with the American Foundation for Suicide Prevention.

In the spring semester of 2022, Ahmad was a recipient of the Clinton E. Stryker distinguished service award. This award recognizes outstanding students who have evidenced significant leadership and service, while making outstanding contributions to student life. Ahmad is also a Camras scholar. Camras scholars make meaningful contributions to the campus and the Illinois Tech community in three focus areas known as the Camras Pillars: leadership, research and service. Ahmad has exemplified our mission, and has positively impacted those that he continues to support, encourage and serve.