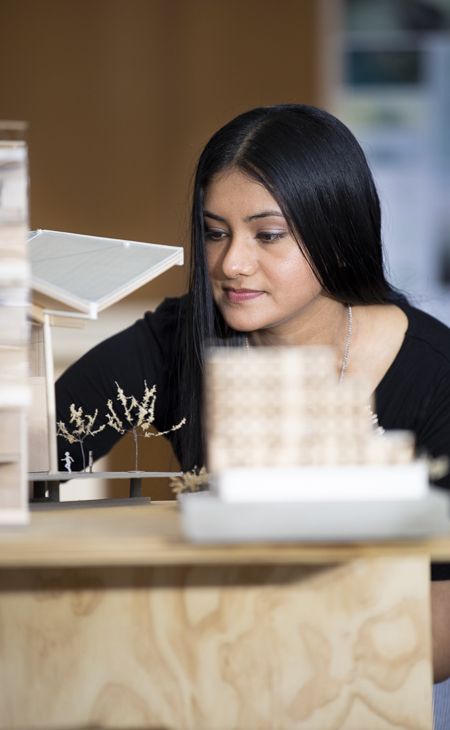 In her first year at Illinois Tech, Aman Panach received a scholarship for her talent and promise as a future architect.

When Aman Panach (M.ARCH. 1st Year) was four, she visited her grandfather in India as he was in the midst of remodeling his house. Naturally, she took an interest.

“We would walk around and talk about it, like, ‘Oh we should do this and that.’ The one thing I remember is that I really wanted a bedroom on the terrace overlooking the fields,” she says. “After that, I returned to the U.S. and forgot about it, but then after a few years, when we went back to visit, I was given a surprise: there it all was; he had taken my advice. That really showed me the power of design and how it can be realized.”

After receiving her Bachelor in Architecture at the University of Washington, where she learned about Chicago’s rich architectural history in her undergraduate classes, Aman decided to come to Illinois Tech for her master’s.

“The city of Chicago stood out to me because of all the wonderful architecture and the background it had,” she says. “Then just as I was looking at schools around here, Illinois Tech stood out for its connection to the city and the architecture firms it has.”

Having recently received a scholarship from the American Institute of Architects Chicago Chapter, and started a studio project centered on urban farming and co-housing in the West Loop, Aman is already enjoying that relationship to Chicago’s architecture community in her first semester. And already, those experiences are informing her path as an architect.

“I would like to form the foundation of my career in Chicago given the strong architecture community, and explore greener alternatives to steel and concrete through professional practice,” she says. “Creating environments where everyone feels comfortable and welcomed is a huge challenge given the diversity of a city like Chicago. I would also like to expand the ability of architecture to form a strong sense of belonging and resilient communities that can stand up for what they believe. ”