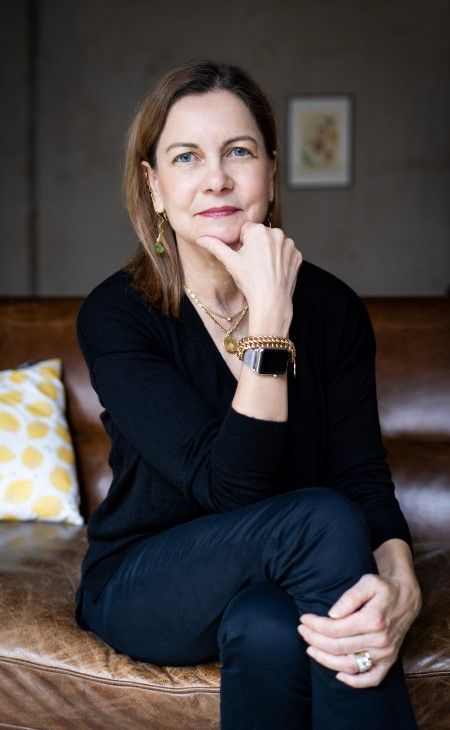 Pamela Mead is the only design executive to make The Financial Technology Report’s top 25 list of women leaders for 2022.

Pamela Mead (M.Des. ’91) spent a decade designing with new technologies, developing projects at Sony, Palm, and Yahoo!. After working with several startups, she moved to Madrid in 2011 to join Telefonica I+D and build a customer-driven innovation practice for its research and development division.

Since 2015 Mead has lived in Germany, and four years later, she became vice president of global design at SumUp, a financial services company for small merchants that has recently launched its own designed and manufactured credit card reader, Solo.

“[Mead] is spearheading the effort to turn SumUp’s services into a cohesive, powerful, and personal SuperApp experience that serves a merchant’s breadth of needs when running their business. Her team is establishing the narrative for SumUp’s UX strategy—from brand expression to experience and service principles. She has been establishing user research as a foundational practice for all product, marketing, and design work with a strong focus on empathy building aligned with SumUp’s mission.”

SumUp, headquartered in Berlin, has offices across the world: the United Kingdom, Poland, Bulgaria, Brazil, Chile, Colombia, and the United States. Mead is tasked with overseeing user experience for software products and brand design at a global level. She is also part of the extended executive team and contributes to strategic decisions for the company’s future.

“Looking at these reports, there are a lot of CFOs and CEOs and people in marketing. I haven’t seen a design executive in the list in the two years, and I feel proud of being able to represent this discipline for product development and strategy,” Mead says.

For two-and-a-half years with SumUp, she has placed a focus on “pushing to significantly shift the product experience in really key aspects.”

“A lot of where I put my focus is at the intersection of different products and services, usually developed by different teams. And, of course, at mission-critical moments for our merchants to take payments and manage their business,” Mead says.

“We’ve built a global community of designers who come together and exchange ideas for a shared design system,” Mead says.

Mead enrolled at ID’s graduate program in 1987 after earning an undergraduate degree in art history from the University of Minnesota Twin Cities. She thought that she’d continue with art history in graduate school, but a certification program in commercial art revealed her interest in the intersection of technology and design methodology. At ID she discovered a love of shaping emerging technologies into something useful for the user.

“I really connected with the approach and focus on computer science at ID. I realized I had a lot more to contribute in my career at the intersection of computing and design, later also in business,” Mead says.

After graduating from ID she was caught in the explosion of personal electronics and the emerging internet and connected devices in the late 1990s, which demanded user-friendly hardware designs and software interfaces. Mead was on the leading edge, guiding Yahoo!, Sony, and other companies through the opportunities presented by constantly evolving technology in search of a fully connected future.

“A lot of revolutions seemed to come overnight,” Mead says. She worked at Yahoo! on a project called Connected Life—an early attempt to connect mobile, TV, and computers into a single communication space. She compares it to the Internet of Things, but 20 years too early. “It was ahead of its time. The vision was there, but the connectivity and technology were still lacking to deliver something of disruptive value in the way it does today,” Mead says.

While device interconnectivity and IoT have advanced since then, she knows the technology can go much further. “I don’t think we’ve seen anything yet.”

My Kind of Town