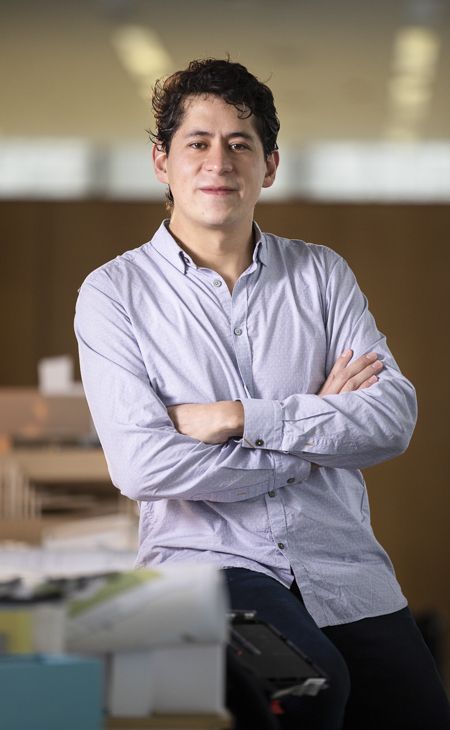 While on a 20-hour layover in Chicago, Alexis Arias-Betancourt took a trip to S. R. Crown Hall. Now he studies there.

When Alexis Arias-Betancourt (M.L.A./M.ARCH. 3rd Year) was confronted with a 20-hour layover in Chicago on a trip to China, he decided to make the most out of the situation with a trip to S. R. Crown Hall. Alexis had learned about the building when earning his bachelor's in architecture in his home country of Ecuador. He didn’t think that when he visited he’d end up becoming a student.

“Of course I was thinking of doing my master’s degree, but Illinois Tech was not one of my options at the time,” says Alexis. “When I visited I thought it was really cool what I saw. I remember seeing a bunch of projects hung up, and I really liked this dynamic of having these open spaces. But one of the things that really impacted me was getting to talk to professors Vedran Mimica and Ron Henderson.”

Coming to Illinois Tech also meant Alexis could pursue studies in architecture and landscape architecture simultaneously, which was important to him because, while he had received his degree in architecture, Alexis came to find he had a passion for working on public space projects back home in Ecuador. “I really loved the impact of the projects and the scale. Having to make bigger discussions and think on how systems work, that is something that was really interesting to me,” says Alexis.

Now in his final year, Alexis is considering his post-collegiate career. Ideally, he says, he’ll return to Ecuador to continue to working on public space projects. “Spaces in Ecuador and the U.S. can be pretty different, so I want to try and create a consciousness and try to educate people, that’s one of my goals I think,” he says. “That’s one of my biggest goals when I go back there and start doing projects.”