Solving the Mysteries of Space 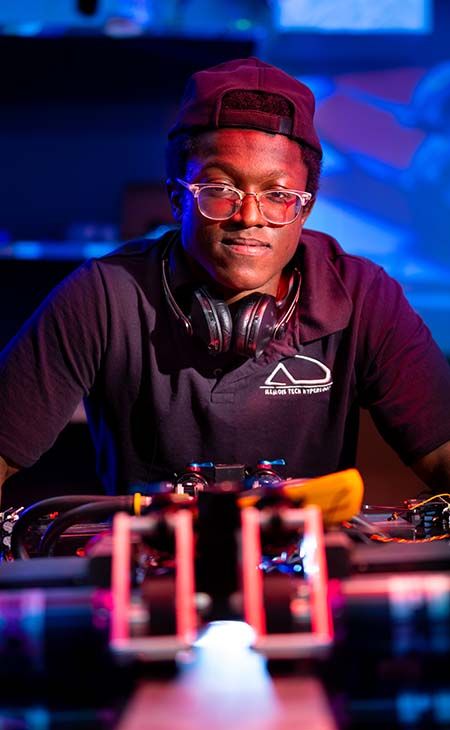 From Hyperloop to an Internship...Up Next, the Stars

Jonte’ Williams says one of the best things about Illinois Tech and hands-on experiences is expanding on what he knows—and, most importantly, what he doesn’t know.

Jonte’ Williams is not wasting any time. The third-year astrophysics and physics double-major drew upon childhood experiences in STEM programs—and inspiration from African-American astrophysicist and planetary scientist Neil deGrasse Tyson—to plot his career course from an early age.

“I like learning about the mysteries the world has to offer because there is a lot that we could change, improve, and invent the more we can understand how this strange world works,” Williams says. “The Northeast STEM Starter Academy [at my high school] helped me realize that I wanted to further pursue science. In terms of the discipline I chose, Neil deGrasse Tyson was my motivation because he showed me that people like me could do more. In my case, maybe I could be like him.”

Originally from Mount Vernon, New York, Williams has taken on leadership roles with the campus chapters of the National Society of Black Engineers, the American Society of Mechanical Engineers, and the American Physical Society. He has also gained real-world experience through his coursework, his involvement with an Interprofessional Projects (IPRO) Program and the Illinois Tech Hyperloop organization, and a 2021 research internship with the Center for Interdisciplinary Exploration and Research in Astrophysics (CIERA) at Northwestern University.

Williams says his involvement with hyperloop at Illinois Tech opened his mind to his own career potential.

“Hyperloop is an annual competition where a team participates by designing a subscale prototype vehicle meant to travel up to 760 miles per hour,” he says. “The goal is to demonstrate the possibilities [that] the technology behind the hyperloop concept has to offer. Hyperloop involves a form of transportation that uses a combination of vacuum tubes that a pod travels through at high speeds using magnetic levitation.”

For Williams, involvement in the hyperloop project showed him how much he could achieve if he put in the effort. His team built a 400-foot track for a pod in just over a semester, then presented on the outcome of their work.

“Two years ago I could barely imagine being in projects of this caliber,” Williams says. “Now I'm here at college studying what I talked about as a kid, and working on projects that could very well change how the world operates. To see my team and I dressed in hyperloop tees presenting in front of professors and loved ones was a golden moment.”

Williams says his goal is to one day work in a research facility or space center.

“I would like to help prove the theories we have about space,” he says. “I like astronomy and my goal is to help further the understanding of the field. Who knows if we’ve barely scratched the surface of what’s out there?”

For now, he will keep focusing on his education.

“I came here as a young student, and I’m here to learn a lot, and a good way to do that is to surround myself with people that could help expand what I know—and, most importantly, what I don’t know,” he says.