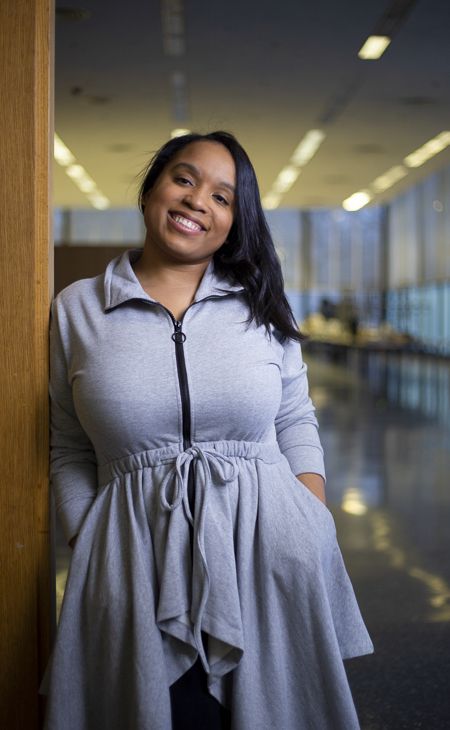 As a first-year student in Chicago’s only landscape architecture program, Tatiana Guider is already leaving her mark on the city.

Tatiana Guider (M.L.A.+U Student) calls the landscape architecture profession her “light at the end of the tunnel.” After being tossed the keys to a skid steer on a landscape installation project while working on her bachelor's degree, Guider came to find the immense satisfaction that even a small-scale project could have.

“By the time we completed hauling away the soil and digging out the pond area, I was covered in dirt and debris, having the time of my life. It’s definitely one of the happiest moments I can recall,” she says.

Upon the recommendation of a friend an Illinois Tech alumnus, Tatiana entered the landscape architecture program at the College of Architecture. She says she was impressed by the school’s hands-on learning approach and knowledgeable staff, but was sold on the program when attending a lecture featuring noted landscape architect Laurie Olin.

“After hearing Mr. Olin speak about his experiences, connections with Illinois Tech and later speaking to current M.L.A. students, Illinois Tech was the only option,” says Tatiana.

Though she’s only just begun her studies at Illinois Tech, Tatiana is already working on a project that would allow movement through a crumbling portion of Northerly Island without disturbing the natural erosion process and ecosystems. Projects like this, she says, are complex and new challenges, but give her new experience in approaching ecologically minded work that improve sites and foster a connection between people and nature, something she hopes to do in her future career.

“This program to me is the accumulation of all the things I have already experienced and everything I have yet to learn that will inevitably push me into the career I have always dreamt of,” says Tatiana. “My connection to the land and my ability to bring that same connection to communities that have long forgotten it are my driving force to and through this program.”