Dr. Khan’s research interests include nanoscale science and technology and materials chemistry with emphasis on functional materials for applications in sensing, energy storage, biomedical usage, environmental cleanup and industrial catalysis. He has published some 85 research papers in refereed international journals, monograph chapters, review articles, and three US Patents. His research work has been highlighted in Science, Science News, and Chemical and Engineering News and incorporated in premier chemistry textbooks.

Dr. Khan has a track-record in education and curriculum development. As the founding Director of the Materials Chemistry Program at IIT, he pioneered the Professional Science Master’s Program in Materials Chemistry which is viewed as a model program combining modern materials design and synthesis strategies with innovative characterization techniques, computational & simulation methods, project management, scientific communication, and intellectual property management. The program, offered throughout the US and Canada, fills a gap in higher education curricula.

Professor Khan has been a Plenary-, Keynote-, Invited-, and Commencement speaker to over 100 international and national conferences, National Laboratories, Industry, and Universities around the World. He has been Organizer & Chair of over a dozen international & national conferences, symposia, and workshops. Currently, he serves on the Advisory Board of two academic institutions and the Advisory Board and Editorial Board of three Professional Journals in Chemistry. He is a member of the American Association for the Advancement of Science, American Chemical Society, North American Catalysis Society, and Chicago Catalysis Club. He has been a German Academic Exchange Fellow and winner of the Academic Staff Fellowship. He received his Master of Science degree from the Aligarh Muslim University, Ph.D. degree from the Indian Institute of Technology Kanpur and postdoctoral training at the Syracuse University.

Throughout his academic career Dr. Khan has been involved in graduate and undergraduate level teaching and research and a wide range of professional activities at national and international levels. Along the way, he has been in considerable academic leadership positions, serving as Chairman of the Chemistry Department, Co-Chairman of the Department of Biological and Chemical Sciences, and Associate Dean of the College of Science and Letters at the Illinois Institute of Technology.

American Association for the Advancement of Science

The following are a list of Dr. Khan's representative publications:

Expert Chapters in the following Monographs: 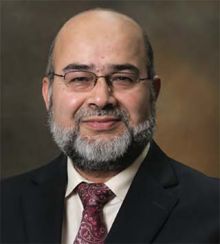