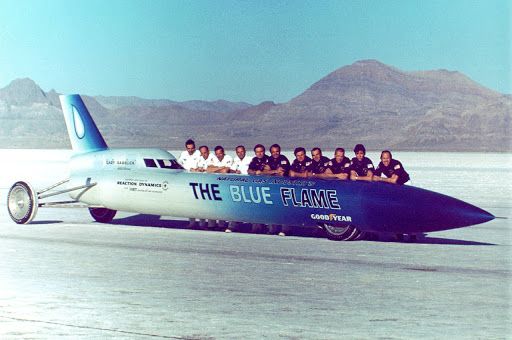 Fifty years ago today—and one day before a Utah snowfall would have changed the course of racing history—a two-ton, 38-foot-long, pearlescent blue rocket car driven by Gary Gabelich roared down the Bonneville Salt Flats at 630.388 miles per hour and into the land-speed record books. More than a super-souped-up hot rod, The Blue Flame burst onto the racecar scene with a unique combination of structural, aerodynamic, and mechanical features that came together thanks to a team that included several members of the Illinois Institute of Technology community: Ray Dausman and Richard “Dick” Keller, IIT Research Institute technologists; Henry R. Linden (Ph.D. CHE ’52), president of the Institute of Gas Technology; Thomas Morel (M.S. ME ’69, Ph.D. ’72); and faculty members Andrew Fejer, T. Paul Torda, and Sarunas C. Uzgiris (M.S. ME ’63, Ph.D. MAE ’66).

“LandSpeed” Louise Ann Noeth, land speed racing historian and author of Bonneville: The Fastest Place on Earth, worked with the office of State Senator Mattie Hunter (Illinois Third District) as well as with officials in Wisconsin and Utah to proclaim October 23, 2020, as Blue Flame Day in all three states.

“Today, just as it was 50 years ago, if you talk about driving something in excess of 300 miles per hour, let alone 600 miles per hour, eyebrows go up and jaws drop. Some think you are mad or have a death wish, but critical thinkers with vision and elastic tenacity know such things require talent and teamwork,” says Noeth, in an email statement. “Without the speed-deed spark from the Reaction Dynamics trio of [Pete] Farnsworth, Dausman, and Keller, IIT’s faculty and staff would never have pivoted its mechanical and aerodynamics resources to design the still stunning and supersonic-possible Blue Flame. And without IIT’s brain power, the Reaction Dynamics racers might still be dreaming of speed and not celebrating a golden anniversary of land speed racing achievement. This is an enduring statement that we are always capable of much more working together than by ourselves.”

Among the rocket car’s attributes that Noeth lists on the proclamation is the “regeneratively cooled, variable thrust liquid-propellant engine [that] used a combination of hydrogen peroxide and liquified natural gas pressurized by helium gas, producing 2,500 lbs. of thrust.” This innovative use of natural gas influenced a large group of industry supporters who provided funding for the vehicle’s construction.

“The 1960s was an exciting time with the space race to the moon proceeding at full speed and garnering much publicity. This was an inspiration for land-based speed enthusiasts as well,” says Keller, a partner in the Wisconsin-based Reaction Dynamics team of Blue Flame developers. “The engineering environment at IIT in the 1960s was fully in support of our ambitious effort to break the existing world land speed record of 600 miles per hour and, perhaps, the sound barrier, ultimately.”

The Blue Flame lives on in more than the memories of those individuals involved in the project and race car enthusiasts the world over. The rocket car can still be seen at the Technik Museum Sinsheim in Germany, where it is on display.

“Ray, Pete, and I decided how fast we wanted to go, then we designed and built the rocket-powered The Blue Flame to go that fast. The Blue Flame was a totally unique design, the entire rocket engine and chassis assembled for its intended purpose, the land speed record,” recalls Keller, noting the lasting significance of the rocket car. “The Blue Flame was the last American car and driver to hold the absolute world land speed record, and the last on the Bonneville Salt Flats in Utah. In fact, the 630.388 mph flying start kilometer record was not exceeded for 27 years.”

Photo: The Blue Flame and members of the team the worked on it (provided) 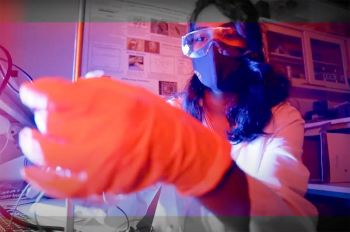