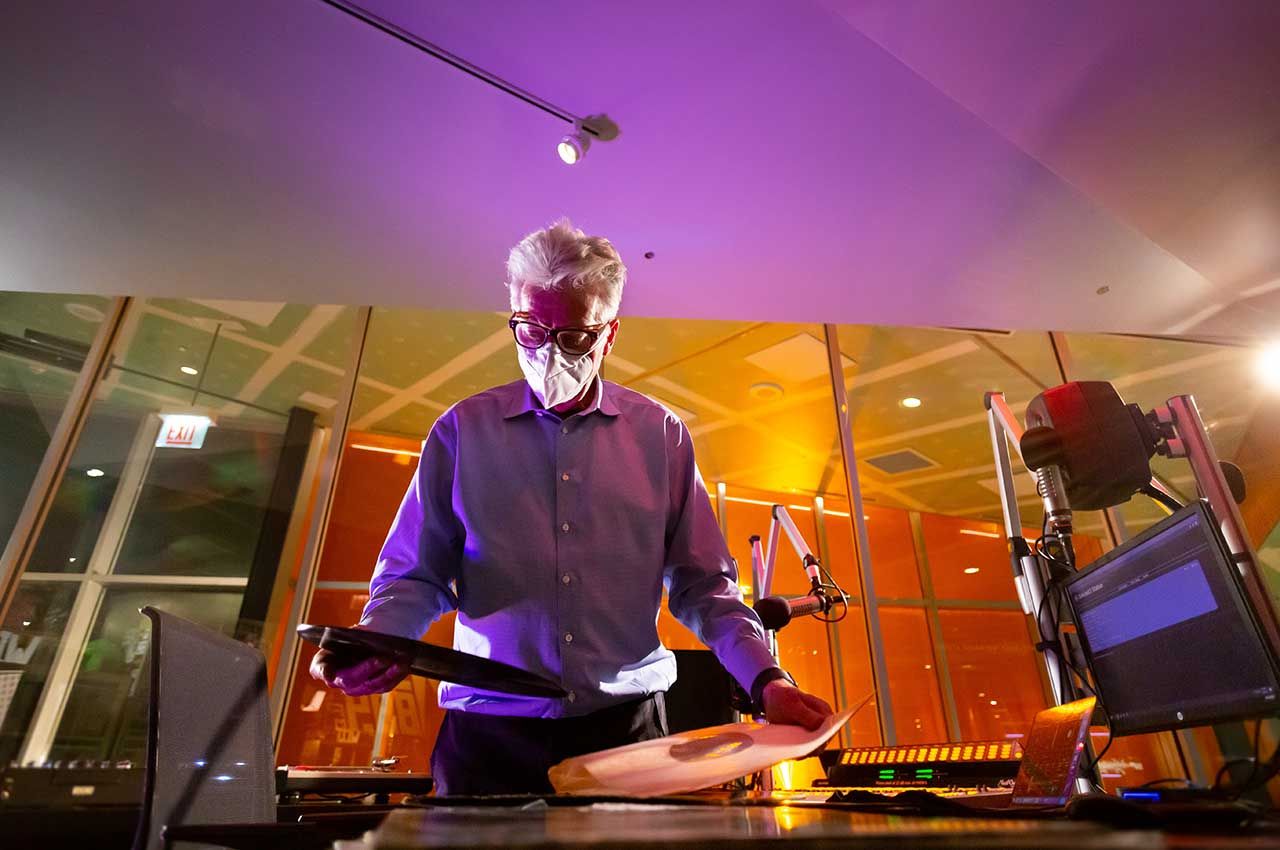 From 7–8 p.m. on March 5, Illinois Institute of Technology President Alan W. Cramb returned to his days as an Aqua Disco disk jockey and then professional DJ in his native Scotland as he took to the airwaves from the A. Sidney Katz Radio Studio of WIIT 88.9 FM, the university’s student radio station. Cramb made his debut appearance as WIIT DJ to kick off a 60-hour COVID-19 stay-at-home dance party from April 3–6, 2020, and wanted to come back to the studio one more time before he retires from the presidency.

“We’re absolutely psyched to have President Cramb in the studio,” said WIIT Station Manager Sam Golden (CS 3rd Year), in the days before Cramb’s visit to the station. “With many students struggling to feel connected to their [Illinois Tech] community at the moment, there is something so enheartening and powerfully casual about this event. It’s not another virtual meeting or forum—it’s our president coming into the studio to spin some vinyl with us.”

Cramb may be an internationally recognized expert in metallurgy and materials engineering, but he always had a special place in his heart for another “M”: music.

“When I was a student, I had my own mobile discotheque that I started with a friend. Now we would be entrepreneurs, but then we just wanted to play music and make money. As we both loved swimming and were lifeguards, we called it the Aqua Disco,” recalls Cramb, who owns a Martin acoustic guitar but says his interests are moving more in the direction of electronic music. “This began in 1972, and we played every Wednesday, Friday, and Saturday at a lounge bar in Ayr in Scotland. We played records mainly for listening early in the evening, but as the evening progressed, people started to dance. When I did my first set at the radio station, it was a remembrance of that time, and as I enjoyed it, I thought it would be fun to do it again.”

Cramb’s “walk into the past from my days as a DJ” kicked off with Arthur Conley’s “Do You Like Good Music” and the mono version of “Back in the U.S.S.R.” from the Beatles’ White Album, “a very special album my sister gave me in 1968.” Throughout the hour he played rhythm and blues and rock classics on original 33 rpm and 45 rpm formats, concluding the show with a fitting medley of two songs—a searing rendition of “Gypsy Eyes” by Jimi Hendrix and the Beatles’ “The End.” Cramb will remain at Illinois Tech as a faculty member and says that he hopes to become more involved with the radio station.

“Music has always been very important to me, starting at a very young age listening to my father’s collection. He was an avid collector of big bands, jazz, and musicals: Glen Miller, Count Basie, and West Side Story, all intermixed every Saturday morning,” says Cramb. “Then came the Beatles and the Stones, Bowie, Eric Clapton, Pink Floyd, and, with time, a love of electronic music—Brian Eno’s ‘ambient music,’ for example, and then a return to jazz, especially late ’50s jazz. All genres have special moments that grow in meaning with time. Music listening is a walk through one’s personal history that continues as long as one listens to new music.”