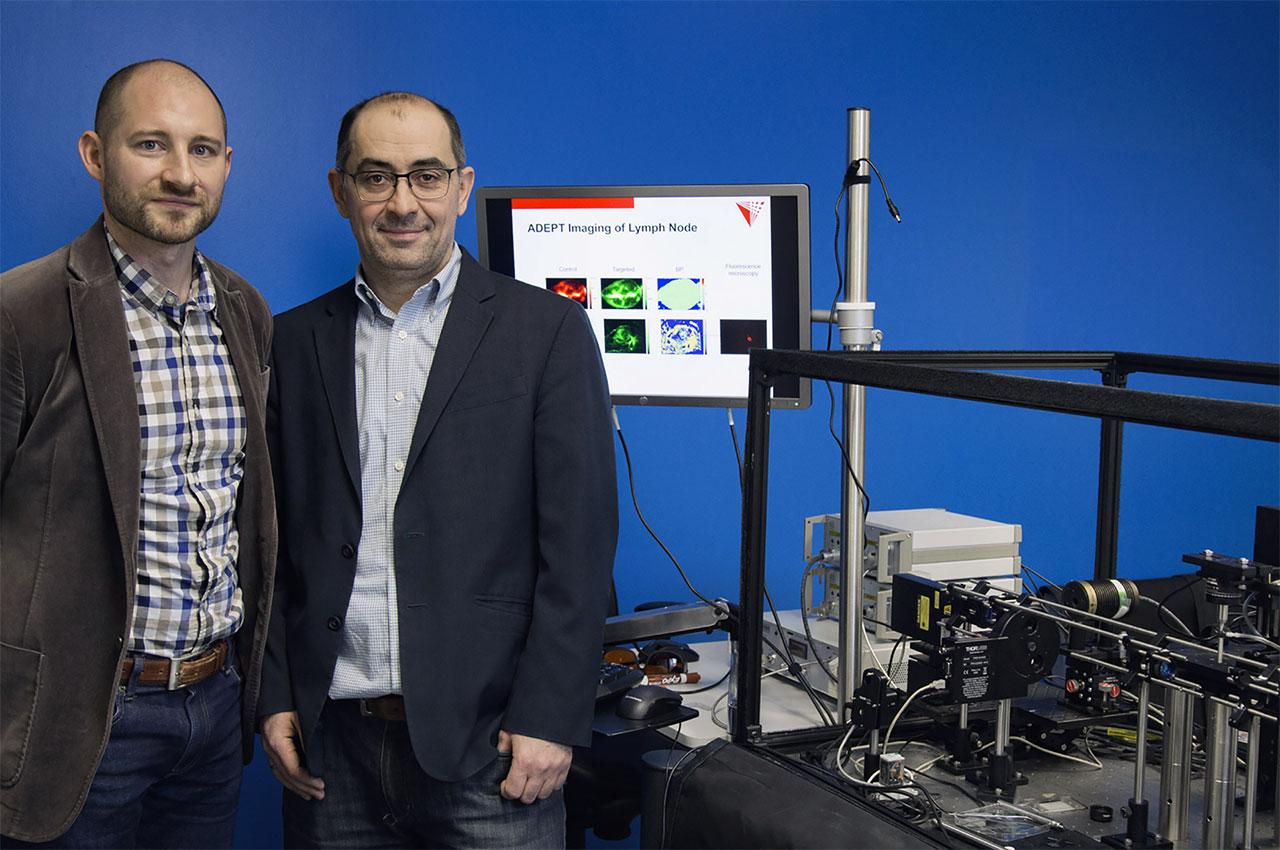 Kenneth Tichauer, an award-winning assistant professor of biomedical engineering, is leading a team that is one step closer to tailoring cancer drug therapy. His research group developed the ADEPT (Agent-Dependent Early Photon Tomography System) Cancer Imager, which recently produced the first images toward a 3-D high-resolution molecular map of a piece of tissue indicating microscopic areas where cancer has spread, and at a far more minute level than existing imagers.

The team is currently working with pig lymph nodes that have been injected with human cells or cells harvested from human cancer grown in an immune-compromised mouse. The nodes are then injected with biologically active fluorescent substances (fluorophores, which display as red and green) that chemically interact with the tissue, seeking out proteins that are over-expressed by breast cancer.

Pig lymph node loaded with three microscopic human breast cancer lesions: [left] The cyan-colored image is the ADEPT image of the targeted imaging agent distribution (lots of nonspecific retention); [middle] The magenta-colored image is the ADEPT image of the control imaging agent (to account for the nonspecific retention); [right] The lymph cartoon is overlaid with the ratio of the cyan and magenta images (in red), highlighting the locations of the three microscopic cancer lesions.

“Lymph nodes drain the primary tumor, which is the reason physicians look for cancer that is spread there. The treatment for metastatic disease is very aggressive; you would not want to give that treatment to somebody who did not need it. Physicians need some way of identifying who should be given the aggressive treatment,” Tichauer explains.

The node is then suspended in the imager and photons, or light particles, pass through the tissue, resulting in a cross-sectional image displaying a “map” of where the red and green dyes, also known as paired agents, have traveled. The tissue specimen can be rotated 360 degrees in the ADEPT chamber so that a 3-D reconstruction can be produced. A larger amount of the protein-seeking dye indicates the presence of cancer while an equivalent proportion of dye distribution would indicate no presence of cancer. Tichauer notes that current studies indicate that patients who have microscopic levels of metastatic disease and who would benefit from a more aggressive therapy are being missed 30 to 60 percent of the time.

“Patients are then coming back later with a more advanced disease than before they started cancer therapy. Our idea is to make the detection of that metastatic disease more sensitive than what is now being done,” he says. “We’ve become leading experts in paired-agent imaging, which allows for quantitative mapping of the cancer molecules.” In a clinical setting, the images would reveal the exact area where cancer cells lie within minutes, thereby allowing medical experts to accurately process the tissue specimen and decide upon the course of treatment.

Tichauer came up with the idea for two-color imaging for cancer detection while he was a postdoc at Dartmouth College, exploring the kinetics of imaging agents in tissue and applying mathematical models to extract quantitative information. At Illinois Tech he formed the ADEPT team with co-principal investigators Jovan Brankov (M.S. EE ’99, Ph.D. ’02), a systems development expert and associate professor of biomedical engineering/electrical and computer engineering, and Rajendra Mehta, a biologist with IIT Research Institute. In 2016 the ADEPT Cancer Imager was selected over two other faculty teams to advance to the second phase of Illinois Tech’s Nayar Prize I. Trustee Madhavan Nayar (M.S. IE ’68) and his wife, Teresa, on behalf of the Nayar Family Foundation, established a $1 million gift to fund the Nayar Prize I (and later, Nayar Prize II) to challenge university faculty, staff, and students to develop breakthrough, innovative projects that will, within three years, produce meaningful results with a societal impact. Tichauer was also funded through a National Science Foundation Faculty Early Career Development (CAREER) Award in 2017 to further refine the imager.

Collaborator Brankov provides a sobering statistic that underscores the researchers’ ultimate goal behind the creation of the ADEPT Cancer Imager.

“From 90 to 95 percent of [cancer] drugs fail at the clinical stage. They have very good results in animal models and in some preliminary phase 1 stages, but when they go into phase 2 and phase 3, they fail,” says Brankov. “The cost of the effective drug is now high because only 5 percent of the investment actually pans out to be something. One of the theories on the heterogeneity of the tumor is that there are various different cancer cells that are undetected or not differentiated. The imager would shorten the time to develop the effective drug and could be a huge savings not only to pharmaceutical companies, but also to NIH [National Institutes of Health], which is funding most of the research.”