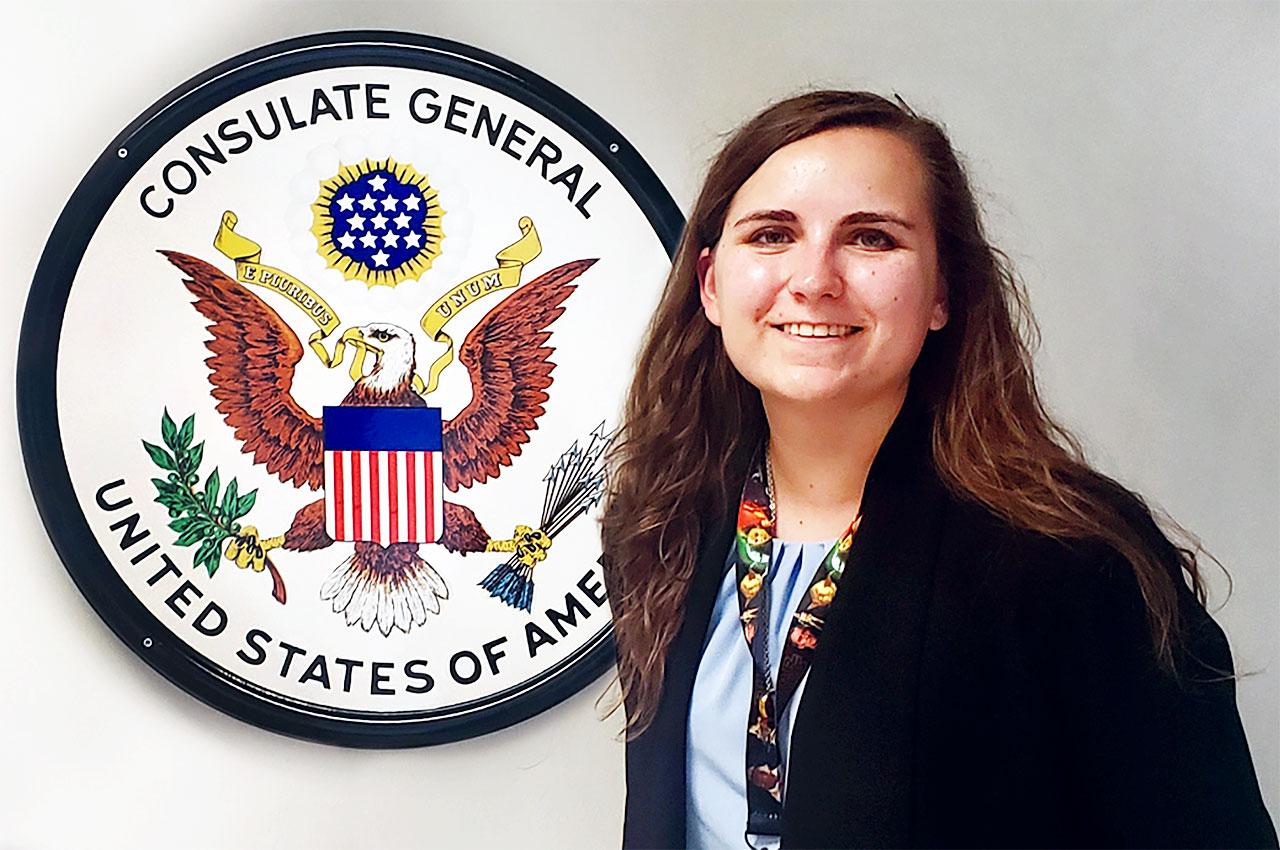 At seemingly every turn the past two summers, Akvile Kiskis has gained knowledge that could prove vital in her future as an information technology professional. In fact, Kiskis (ITM ’19, M.A.S. CYF ’19) has gone out of her way to ensure her experience during the Foreign Affairs Information Technology Fellowship will allow her to seamlessly transition into professional life.

Take, for example, how the Illinois Institute of Technology alumna navigated the opportunities presented to her last summer at the United States Department of State in Washington, D.C., during the first of the program’s two internships.

“I worked in a newer office, so they were still establishing their day-to-day operations. I used that as an opportunity to reach out to people in other offices that interested me and ask them if I could shadow them for a day or so,” Kiskis says in email from Frankfurt, Germany, where she is serving as an intern at the U.S. consulate. “This allowed me to fill in the gaps between my projects and helped me learn about what other offices in our department do.”

The fellowship is a two-year program that includes two internships—one in the U.S., generally in D.C., and the other abroad—where participants receive personalized mentoring and professional development opportunities while working at the State Department and embassies and consulates around the world. Upon completion of the program, fellows become Foreign Service information management specialists, a position they’ll work in for at least five years.

Administered by The Washington Center, which provides immersive internships and academic seminars to students and young professionals from across the U.S. and more than 25 countries, the fellowship aims to diversify the ranks of those working as information management specialists from traditionally underrepresented minority groups. The highly selective program selects just five fellows in each cohort.

Kiskis was part of the inaugural cohort of the fellowship in 2017. Fellow information technology and management student Andreas Vassilakos became the second Illinois Tech student chosen to participate when he was selected for the 2019 cohort.

“I absolutely love it,” she says of the fellowship. “This has opened so many doors for me, and I’ve met a lot of amazing people so far.”

Kiskis completed her first internship at the State Department in summer 2018, and is currently in the midst of her second in Frankfurt this summer. This fall she’ll begin training for her full-time role as an information management specialist, before then being assigned to a post.

Information management specialists provide IT services at more than 275 overseas posts in 200 countries. They maintain secure, reliable IT tools and resources to ensure that Foreign Service officers, federal agencies, and non-government partners can promote diplomacy overseas.

It’s been an enlightening experience for Kiskis, who was unaware of this career path prior to the fellowship. She says that everyone at the State Department and at the consulate in Frankfurt has been welcoming and particularly helpful, from her boss in Frankfurt showing her all sides of operations to help her understand precisely how consulates and embassies function, to the hands-on work she did while in D.C., such as her time on the Red Team where she was part of a group that “tested the government’s network for vulnerabilities and wrote up a report on how to remediate against them.”

“They taught me so much in the short time that I was there, and working in that office made me realize that I enjoyed ethical hacking/penetration testing,” Kiskis says of the Red Team experience. “If it wasn’t for that opportunity, I’m not sure how long it would’ve taken me to learn about this type of role or even get the opportunity to work alongside experienced employees in that realm.”

Working in Frankfurt, Kiskis has gotten the opportunity to travel across Europe—from exploring other cities in Germany to traveling to Lithuania, in addition to visits to Paris, London, Brussels, and Amsterdam that will take place later this summer. Immersing herself in the different cities and cultures has been among the highlights of her experience in the program, and has driven home why she has been eager to absorb all that she can to be ready for her career opportunity in Foreign Service, one Kiskis says Illinois Tech prepared her for.

“It’s one thing to read about troubleshooting computers, but it’s a whole other thing when you have one in front of you. The hands-on aspect of [the ITM] program really came in handy with this fellowship,” she says. “Having a programming and scripting background helped as well to make creating, using, and troubleshooting existing programs and scripts much easier for me.”