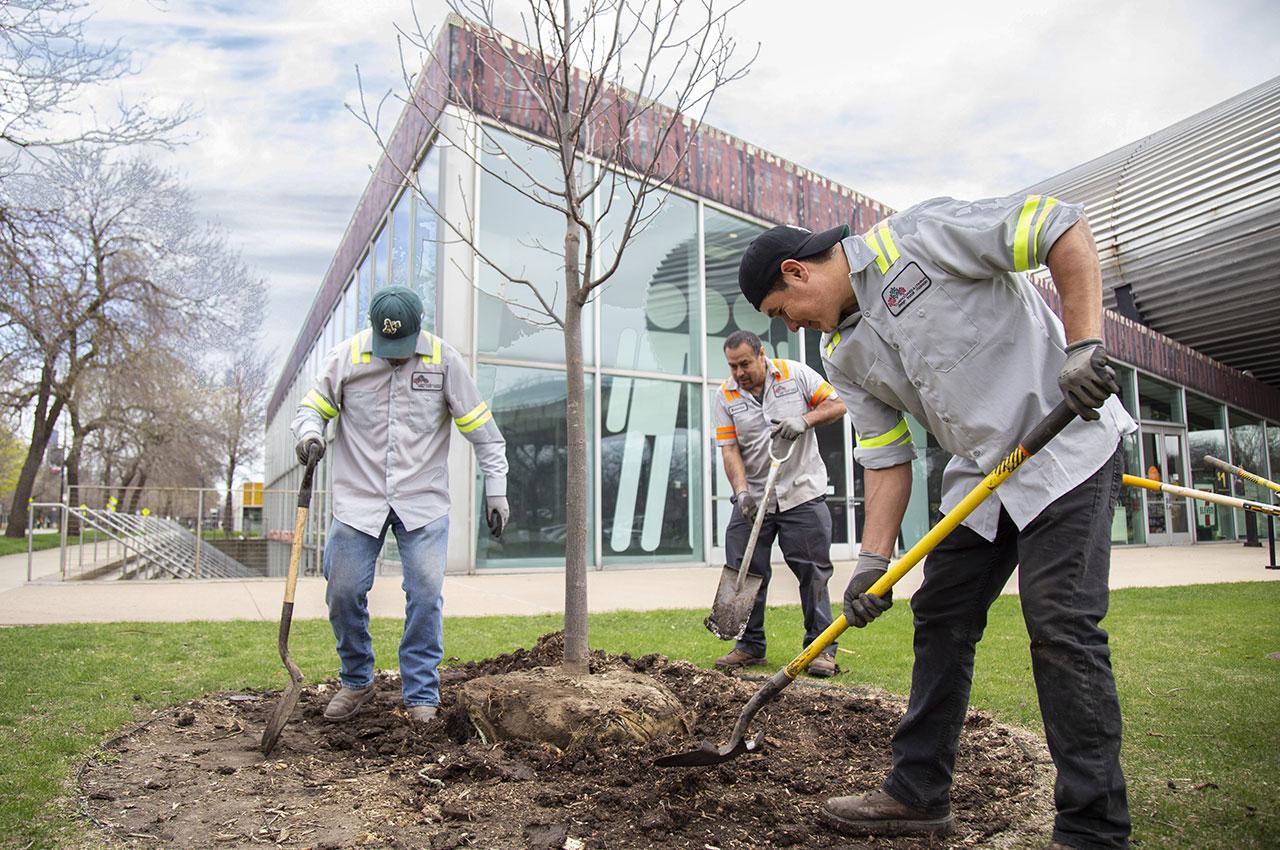 The emerald ash borer, a tiny, shimmering green beetle native to Asia and first spotted in the United States in 2002, has been responsible for the destruction of millions of ash trees in the U.S. since its discovery—including trees on Illinois Institute of Technology’s campus, which will lose roughly 150 ash trees as a result of the emerald ash borer infestation. In an effort to replace them, Illinois Tech’s facilities department is working in collaboration with Ron Henderson, director of the university’s Landscape Architecture and Urbanism Program, and Chandra Goldsmith-Gray, a member of the College of Architecture Board of Advisors, to plant 62 new trees on Mies Campus.

According to Henderson, who helped select the tree species to be planted, 16 varieties, eight of which are new to campus, will be planted in place of the dying ash trees. “Increasing biodiversity means we will be less likely to lose so many trees of the same species with the same impact as we’re facing with the loss of the ash trees,” says Henderson.

Henderson also attributes the diversity of the trees to Ludwig Mies van der Rohe and Alfred Caldwell’s concept of “Campus in the Park,” which laid out a landscape plan for Illinois Tech’s Mies Campus. “When you think of a park you see trees and grass, and that’s really the model for the campus. That’s why you don’t see lower flowering shrubs or herbaceous plants,” he says. “So instead, the spatial structure of trees on the campus is similar to the native savanna and woodlands—an open field of grass with scattered trees like the smaller crabapples and serviceberry, and taller canopy trees like the honey locust and Kentucky coffeetrees. We work with those layers, something Caldwell established.”

As for the tree selection, Caldwell historically chose species with meandering branching habits that, according to Henderson, “are seen as a foil to the right-angle planning and cubic volumes of the campus.” Additionally, trees were chosen with flowering cycles that would prolong blooming on campus for several months, rather than having all trees in bloom at once.

What’s more, the university will experiment with new types of species not commonly seen in Chicago, like the yellowwood, a species native to southeastern states with warmer climates, such as Kentucky and Tennessee. “Due to climate change, the species that thrive in Chicago are transitioning,” says Henderson. “They’re trying to move north to survive, and so we will test some of these species on our campus. It’s a hard time in the history of the world to be a plant.”

The project began on Wednesday, April 24, and will continue over the coming weeks. According to Henderson, these 62 trees are a beginning to a larger, ongoing project to add to the urban forest on campus. Ultimately, for every tree lost, two more will be planted in its place.