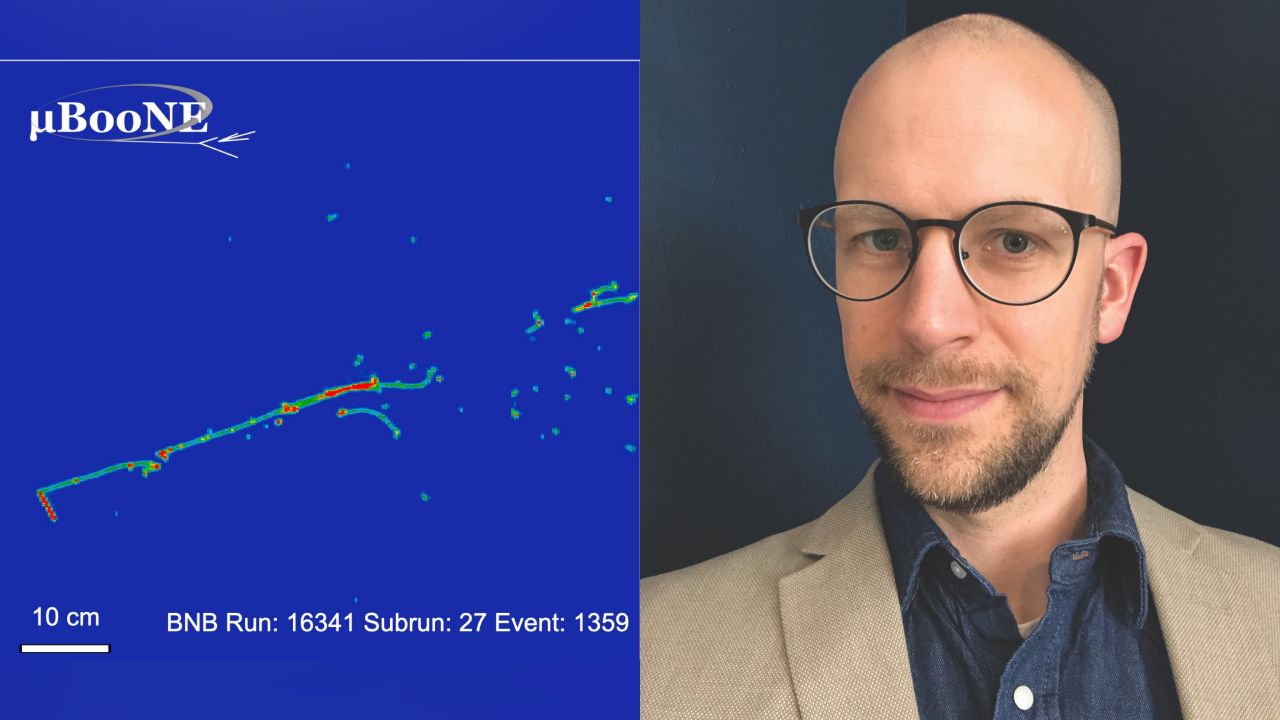 CHICAGO, October 27, 2021—Illinois Institute of Technology Associate Professor of Physics Bryce Littlejohn is part of an international team of scientists that has dealt a blow to a popular theory of the existence of a fourth “sterile” neutrino. The groundbreaking research results were announced at Fermi National Accelerator Laboratory today.

Neutrinos, which come in three known “flavors,” are smaller than atoms and are one of the most plentiful fundamental building blocks in the universe. Scientists have spent decades searching for an explanation for unexpected indications that neutrinos swap flavors between where they are produced and where they are detected. A popular theory explaining this result posits the existence of an undiscovered fourth “sterile” neutrino that is even more ghostly in nature than the three known flavors. Today’s findings from experiments conducted by MicroBooNE, a powerful neutrino detector built at Fermilab to better understand neutrino interactions, deal a major blow this theory.

MicroBooNE is like “a giant digital camera that takes millimeter-scale, precision digital pictures of neutrinos interacting inside of the camera,” Littlejohn says. It uses special light sensors and more than 8,000 attached wires to capture neutrino interactions. Littlejohn, who has worked on this project since 2012, organized the installation of the detector’s electronic systems used to operate those wires and read out data from the detector. As the oscillations group convener, he is also in charge of the analysis group that produced the new reported results. More than 200 researchers from 36 institutions in five countries were involved in helping MicroBooNE achieve its recent discovery.

Littlejohn’s Illinois Tech research group has been using artificial intelligence and deep machine learning to process MicroBooNE’s images to create charts that detail the trajectories and identities of neutrino interaction products. These images and tools enable collaborators to distinguish electrons from photons in MicroBooNE images, a crucial piece of information that was missing in previous experiments.

“If previous experiments were right about seeing hints of sterile neutrinos, we should have been able to see something new and crazy, but we did not see anything new and crazy so far,” Littlejohn says. “That new neutrino either can’t be out there or it looks different than people were expecting.”

Although the data did not reveal evidence of a fourth neutrino, it still doesn’t explain the anomalies that have appeared in previous neutrino physics experiments. MicroBooNE researchers will do follow-up analyses with more data that will test different types of new physics that go beyond the Standard Model while new higher-precision SBND and ICARUS detectors come online at Fermilab in the next year to further enhance MicroBooNE’s search.

“We know new physics has to be out there somewhere. Otherwise, for example, we wouldn’t have seen all of these pieces of evidence pointing to dark matter existing,” Littlejohn says. “There’s got to be some connection between the dark matter we see in the universe and strange new particle types that we can make at high-energy physics laboratories here on Earth.”

Along with Littlejohn, Illinois Tech postdoctoral fellow Ryan Dorrill and undergraduate Whitmaur Castiglioni worked on the project. Illinois Tech alumni Rui An and Ivan Lepetic also worked with the research team while they were Ph.D. students. An developed algorithms for processing the exquisite 3D images that come out of MicroBooNE. One of the exciting things about this project is that its scientists, including An, used cutting-edge machine learning tools to perform deep, effective analysis on the images that wouldn’t be possible with the naked eye or conventional computer science tools, Littlejohn says. As a particle physicist, Littlejohn says that he loves using the experimentation process to find out what’s real and what’s not real about the universe.

“The long period of work that we’ve had to get to this result has been very rewarding, because we have found out something totally new, and we weren’t sure what the answer was going to be when we started,” he says.

Learn more about Littlejohn’s role in the MicroBooNE project, here.