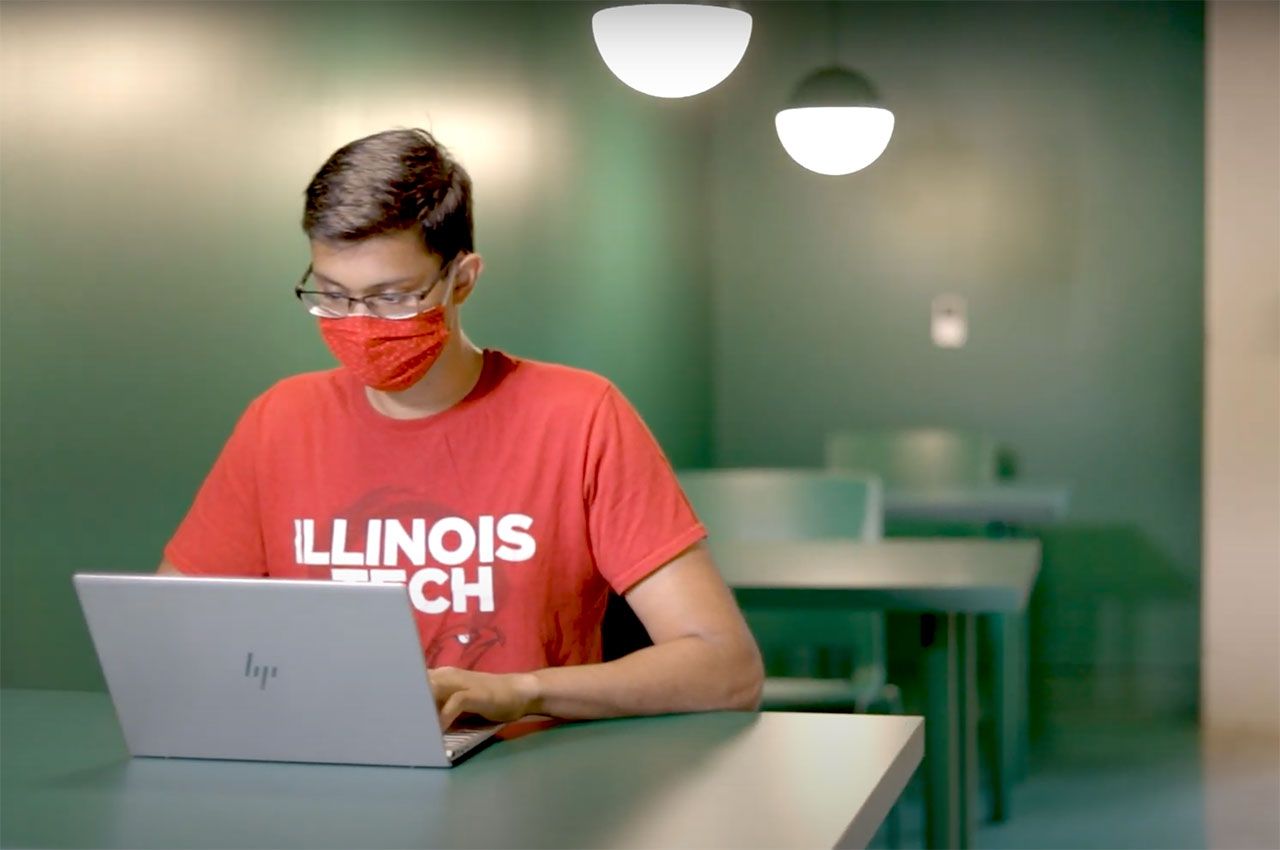 On August 3 Ricardo Bustillo (ME 5th Year, M.S. MMAE Candidate) began carrying his belongings into the gleaming nine-story, Modernist high-rise building at 3101 South Wabash Avenue. A resident adviser, he is among the first Illinois Institute of Technology students this year to move into the building: the newly renovated George J. Kacek Hall.

“It’s the first time somebody will be living in this new space, and that is very exciting to me,” says Bustillo. “It has so many amenities for students, and I think there are a lot of things here that will help them throughout the year.”

Kacek Hall was named in memory of George J. Kacek (EE '54, M.S. '55), who made a generous estate commitment to Illinois Tech. This generosity helped fund the building's renovation, allowing it to be used for on-campus housing for the first time in over a decade. With the capacity to house up to 328 students, the building will be home to approximately 180 this year to facilitate social distancing.

“George gave back to Illinois Tech in such an extraordinary way. Naming the newly renovated residence hall for an alumnus who greatly valued both his time at Illinois Tech and the education that helped launch his career serves the dual purpose of honoring the Kacek name in Chicago, as well as highlighting George’s commitment to Illinois Tech students,” adds Ernie Iseminger, vice president for advancement. “It’s through George’s philanthropy that we are able to welcome the first four Kacek scholars on campus this fall as well as offer this exceptional living environment. He is an inspiration for the Illinois Tech community and sets a wonderful example.”

It is one of three residential towers originally designed by Ludwig Mies van der Rohe in 1954. Meant to accommodate the housing needs of faculty, staff, and married students following World War II, Kacek Hall initially resembled a traditional apartment building with units coming off a main corridor, prioritizing the private spaces of its occupants, many of whom had families.

The renovation—led by Dirk Denison, FAIA (ARCH ’83, M.B.A. ’85), College of Architecture professor and alumnus—flips that original floorplan on its head. The new interior layout instead favors a pod-like configuration, where communal spaces are surrounded by single, double, and triple rooms. Student input, Denison says, significantly impacted the new floorplan.

“The plan we created in Kacek is about the community, it’s about sharing space in a way that allows many different options in terms of where the residents can be,” says Denison. “The students were really our clients. They told us that they are used to being connected virtually and disconnected physically, even before COVID-19, because of the technology they use daily. The idea was to give students multiple opportunities to interact immediately outside their doors. And safe ways of living together are only more welcome during the pandemic.”

Denison and his team also emphasized the ideas of “moments” throughout the building, characterized by the ample natural daylight and 360-degree views of the skyline to the north, the lake to the east, and the rest of campus and Chicago on the south and west sides. This, he says, also helps bring the landscape of campus—including new landscape design by College of Architecture Board of Advisors member Chandra Goldsmith-Gray just outside Kacek Hall—into the building.

“I’m most excited for [students] to find their own individuality in the building,” says Denison. “I’m imagining conversations like, ‘Where do you live in the building?’ With responses like, ‘Oh, I live in the corner overlooking the tennis courts,’ or ‘I’m at the end of the corridor where the window looks out at the ‘L’ train.’”

For Denison, the opportunity to renovate a Mies building on campus is a unique, influenced by his own experiences as a student at Illinois Tech, both as a former student of the Mies curriculum and as a resident who lived for four years in the nearly identical Carman Hall.

“Living in Carman very much influenced my thinking for Kacek, having ‘lived’ the specifics of the building: the ceiling heights, how far the columns are apart, and what kind of opportunities that provided for how the windows are laid out and how those spaces can respond to those geometries on the inside,” says Denison. “And the classical Miesian principles I learned at IIT have been reference points for me every day in my work, and so very much in the design of Kacek Hall.”

As both an original piece of the Mies campus design, and a revitalized work by an Illinois Tech alumnus and faculty member, with input from current students and funding from another generous alumnus, the building represents the continuing legacy of academic rigor and architectural excellence from the Illinois Tech community.

“I want to compliment the university on this commitment to bringing these buildings back to life in a way that keeps the students foremost in mind, but also is so meaningful to the community,” says Denison. “The IIT campus and surrounding city has been a ground for study that my students and I have returned to time and time again. It is a perfect illustration of how interdependent and interrelated all of the components of our physical world are.”