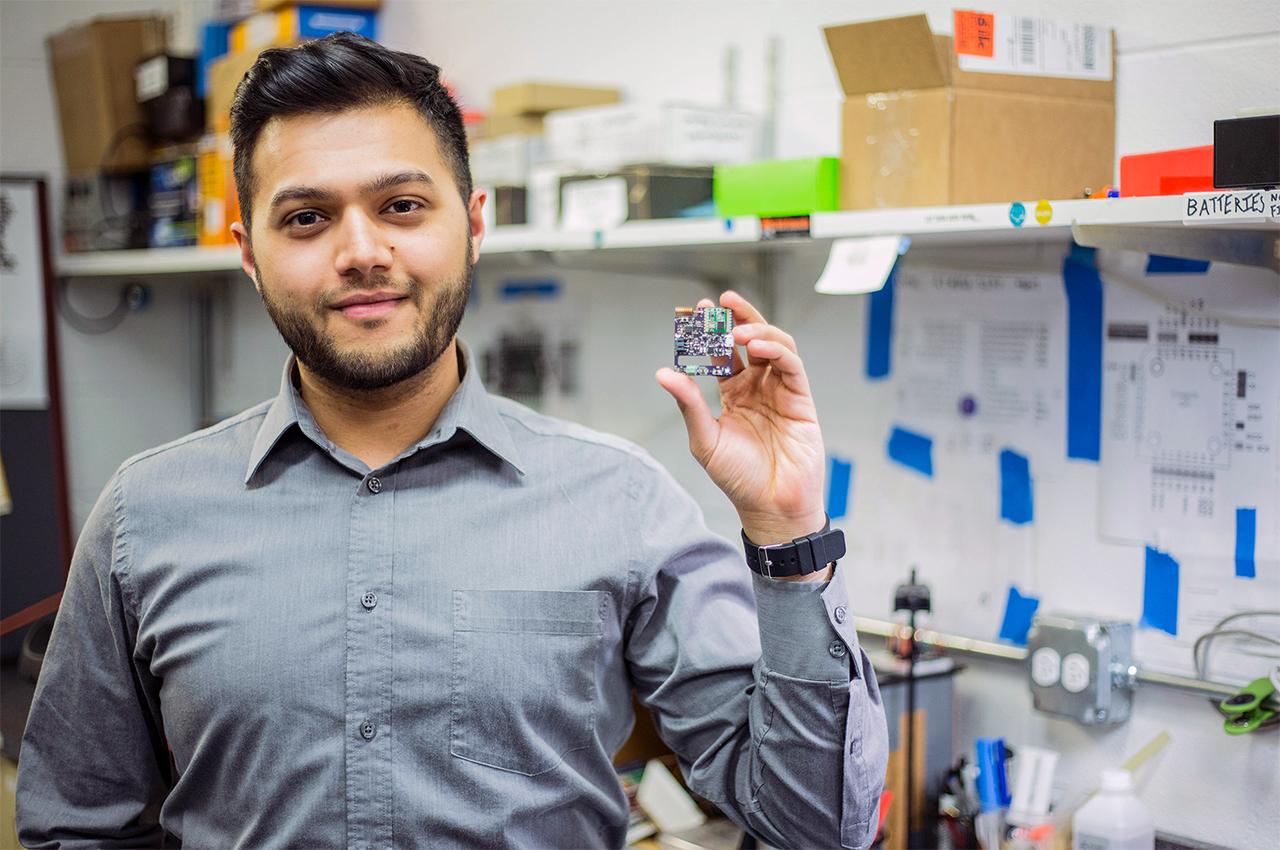 For Ph.D. candidate Akram Ali, the inefficient heating system in Alumni Memorial Hall wasn’t a nuisance—it was a challenge.

Ali, who is studying civil engineering, saw a chance to make the building’s system more accurate and eco-friendly by developing low-cost, open-source solutions.

So Ali, along with mechanical, materials, and aerospace engineering undergraduate Christopher Riley, has designed and built small, low-power wireless sensors that can measure temperature, light, and carbon dioxide, in addition to motion sensors and motors to outfit rooms in Alumni Hall, which was previously heated by a system of manually controlled radiators.

Ludwig Mies van der Rohe designed Alumni Hall, which was built in 1945–46. Updating historic and landmark architecture, such as Alumni Hall and other campus structures, to align with twenty-first century energy-efficiency standards presents thorny issues for engineers and architects alike.

“This is a continuation of my master’s thesis done here at Illinois Tech,” Ali says. “We developed sensors as an alternative to the expensive research-grade ones on the market. They can be several thousands of dollars, but we built a open-source platform with similar accuracy that can be from tens to a couple hundred only.”

With the new devices in place, temperatures in different rooms of the building can be monitored from a single computer, and temperature can be adjusted as needed. Not only does the system make heating more accurate, but it also can automatically turn down the heat and conserve more energy once all students and faculty leave a room or a building.

“The goal of Akram’s project in Alumni Hall is to demonstrate the energy savings potential of his novel sensing and control platform,” says Ali’s faculty advisor, Associate Professor of Architectural Engineering Brent Stephens, who heads the Built Environment Research Group at Illinois Tech. “We are monitoring radiator output in several rooms both before and after the installation of his system, and we expect radiator use to decrease during unoccupied periods after installing his system, thus saving energy that is currently wasted.”

The work is documented as part of the Open Source Science Sensors project, which has received funding from the Alfred P. Sloan Foundationthrough its program on the Microbiology of the Built Environment.

The next step of the sensors project will be to seek funding to outfit the rest of the historic buildings on Illinois Tech’s Mies Campus, on the National Register of Historic Places, with this energy saving system. More accurate heating will help make campus more efficient, Ali says, but also more comfortable for the people working and learning in its buildings.

“I get to work on something that’s part of my thesis but will also make something better on campus for other students,” Ali says. “That’s pretty cool.”