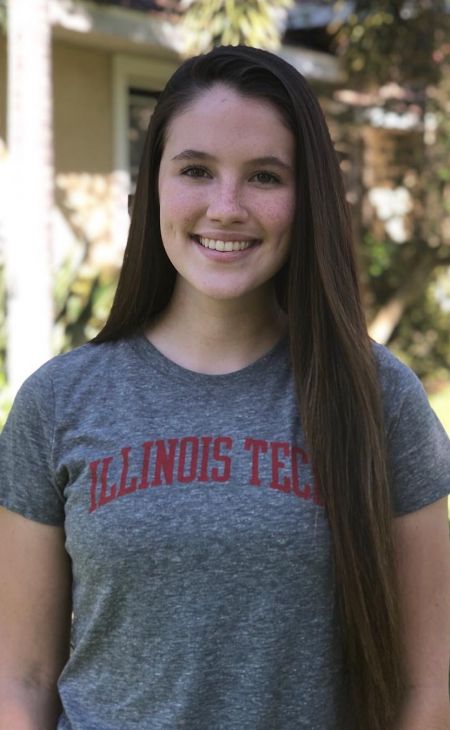 In high school, Olivia Hansen loved painting and drawing but also found herself excelling at science and math. While exploring how she could combine those passions, she landed first on architecture and now has settled on civil engineering, because the licensing would give her final say on her designs.

She graduated from high school early with lots of advanced placement credits, and through the Illinois Institute of Technology Accelerated Master’s Program, Olivia is on track to receive her Master of Engineering in Structural Engineering at just 20 years old.

Olivia says the deciding factor for attending Illinois Tech came when she received the Camras Scholarship, a highly competitive full-tuition scholarship. “That program has really made all this happen for me. I knew that I wanted to come here; it just was about getting here. Once I got that scholarship, it made this all possible,” she says.

As a civil engineering major, Olivia joined the Illinois Tech Railroad Club, a student chapter of the American Railway Engineering and Maintenance-of-Way Association that has continued to build a gigantic model railway. She says that through the club’s seminars and activities, she grew to love the structural design behind bridges. Last year she served as secretary; this year, she was elected as the club’s president.

Olivia says that the club has also been great for making connections, and in the summer of 2021, she will intern with the structural team at Wilson & Company. “I’ll mostly be working with the rail departments with rail bridges, but also be getting exposure to water systems and other structural elements of the industry that they have out in Denver,” she says.

As Olivia builds her bridge expertise, she’s most interested in designs that make a positive impact, like greener bridges that use lean construction, building reduced construction waste directly into the design process.

“I think that’s the biggest goal for me,” she says, “being able to make greener designs and make them actually come to life. That, and I want to be able to go to different places, solving different problems and learning from a lot of different groups of people before I settle down into one area and hopefully move up within a company.”