Bringing Design Into the Board Room 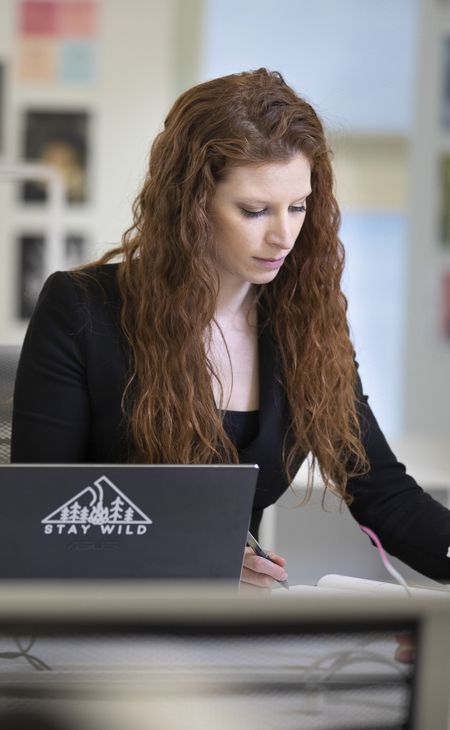 Wanting to bridge the gap between decision-makers and designers, Jessica Bogart Kasper came to the Institute of Design to learn how to broker collaboration and drive deeper impact.

When first working toward her undergraduate degree at the University of Delaware, Jessica Bogart Kasper (Master of Design Methods Candidate) always felt that design and business had an intrinsic link to each other. But as she would soon find out, her advisers didn’t feel the same way.

“I wanted to double major in graphic design and business, but every school I spoke with believed these two entities were unrelated; there were literally no crossover credits. Some were even offended when I suggested that the sterile, metrics-driven world of business would ever have anything to do with the freethinking, creative world of design,” she says.

Jessica earned her degree in graphic design while auditing business classes every semester. After graduation, she began her career as an art director at an advertising agency, then worked as a graphics producer for NBCUniversal. While at NBC, she launched her own company developing interactive children’s books for the newly introduced iPad. During these endeavors, she was able to put her creative talents to use in a business environment. However, she still found herself dismayed by the broader barrier between decision-makers and creative teams.

Jessica found herself looking for graduate programs with a focus on design methodologies that could help her drive change within organizations, while developing leadership skills and immersing herself in a creative community.

“When I narrowed down my options, ID was the clear winner,” says Jessica. “The idea of going back to school after more than 10 years was scary for me. The administration worked with me to discuss all my concerns and help me determine if this was the right fit. I quickly discovered the unique, caring, smart community that I wanted to be a part of.”

As Jessica nears the completion of her degree, she hopes to further bridge the two areas by brokering collaboration.

“When I think about my future after ID, I think about the design maturity curve. Some companies are just beginning to understand and integrate design into their strategic thinking, while others are far more mature and have already moved design into the core of their business. Through the M.D.M. program, I feel armed with a strong toolkit for approaching either scenario.”