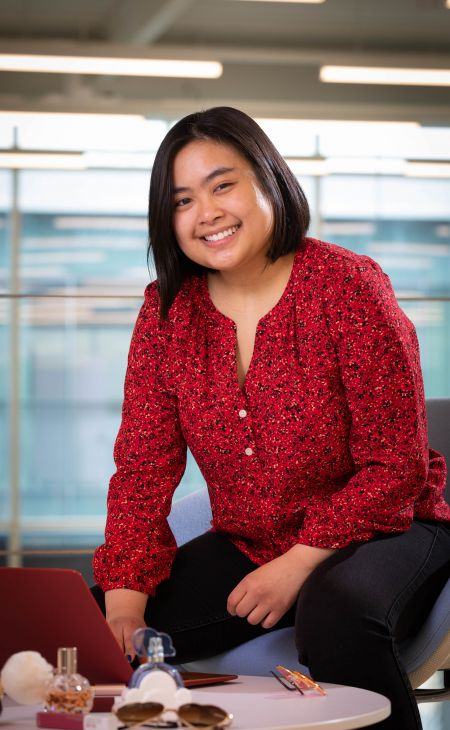 As a student president, Jessica Forbes is building the skills to one day run her own business.

“I was always a huge dreamer since I was little,” says Jessica Forbes. “My dad has always told me that dreams are free, the sky’s the limit, and it doesn’t cost anything to dream big.”

When as a teenager Jessica found her confidence impacted by acne, she learned the power that cosmetics had to transform someone’s experience and started to form her own big dream: she wants to run her own cosmetics business.

“I have always been very entrepreneurial and business-minded,” says Jessica. “I was that kid who would create bracelets and sell them.”

She turned to her love of science to figure out how to make her dream a reality. “I like how engineers develop ways of thinking, like problem solving and critical thinking, and that you’re allowed to be creative in what you do. It’s all about exploring,” she says.

Jessica says pursuing chemical engineering has given her the confidence to follow her dreams, because she knows she has lots of options for how she can apply her degree. “It has made me feel secure,” she says.

She looked for colleges that followed the philosophy of her smaller math and science high school. “It was rigorous and focused on nurturing students into becoming the brightest and the most innovative. I saw that Illinois Tech valued the same principles,” she says. “Also, Illinois Tech was very generous with scholarships, which was a large factor in deciding between colleges, and I have not once regretted my decision to go here.”

At Illinois Tech she started volunteering with the college’s chapter of the American Institute of Chemical Engineers (AIChE) as a freshman after a friend convinced her to go to an event. “I started as public relations chair and then served as vice president and now I am president. In every position, I’ve learned something different, and all those skills combined have really helped me. I’ve also learned a lot about myself,” she says.

In 2020, despite the hardships associated with no longer being able to meet in person, Jessica’s leadership helped the chapter earn the AIChE’s Outstanding Student Chapter award.