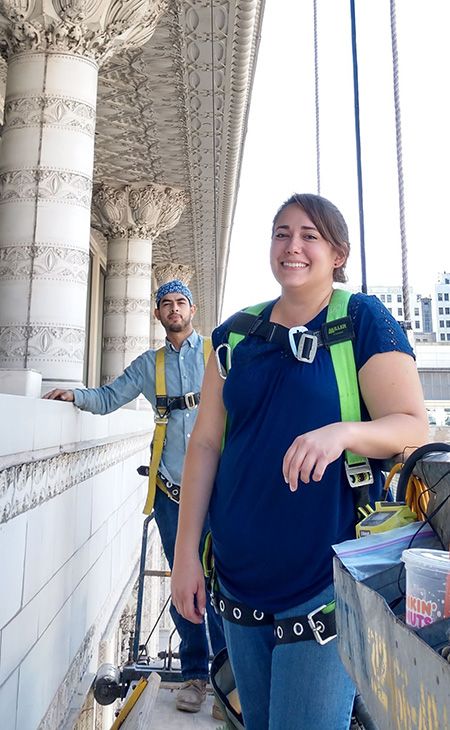 Allison Toonen-Talamo is one of three recipients of the 2020 American Express Aspire Award from the National Trust for Historic Preservation, as a representative of the “future of the historic preservation movement”

Although she didn’t recognize it then, Allison Toonen-Talamo’s path to becoming an historic preservation leader began when she saw that in the mid-2000s, the ranches, homes, and mom-and-pop businesses in the hill country outside of San Antonio, Texas, where she grew up, had become the victims of urban sprawl.

“I was not able to see the stars as much at night. I had a handful of places that were close to my heart or was a memory that was burned into my head, of a place that was no longer there because it was replaced with new development or had been left vacant until someone could buy and save it,” she recalls. “These points growing up stayed in the back of my head; I did not fully grasp it until I saw how much it all could affect an area over time.”

At Illinois Institute of Technology, Toonen-Talamo took a landscape architecture course on the history of preservation. She also participated in an Interprofessional Projects (IPRO) Program on rehabilitating the Historic Ford Hangar in Lansing, Illinois, as well as developing a business model for the facility.

“That moment was when my eyes were opened, I was hooked, and I realized this what I wanted to do,” she says.

Today Toonen-Talamo is still active at the hangar, “utilizing it as a tool to educate younger generations how to provide a new space to an existing building and help support the community.” She is the former chair of the Skyline Council of Landmarks Illinois and is currently a board member for Landmarks Illinois. Through her employer, she is working on a variety of projects including assessing the former Bronzeville residence of the late blues musician Muddy Waters. And for her preservation efforts, she was one of three individuals recognized with the 2020 American Express Aspire Award from the National Trust for Historic Preservation.

“I see every neighborhood, city, and state as a piece of fabric to a quilt. Each of us is important to one another and our stories need to keep going for the next generation,” says Toonen-Talamo. “A building, monument, or plaque is part of our story. It is a sense of place that holds something important to our hearts, gives us inspiration, and educates us. That is why preserving our past is important to me.”