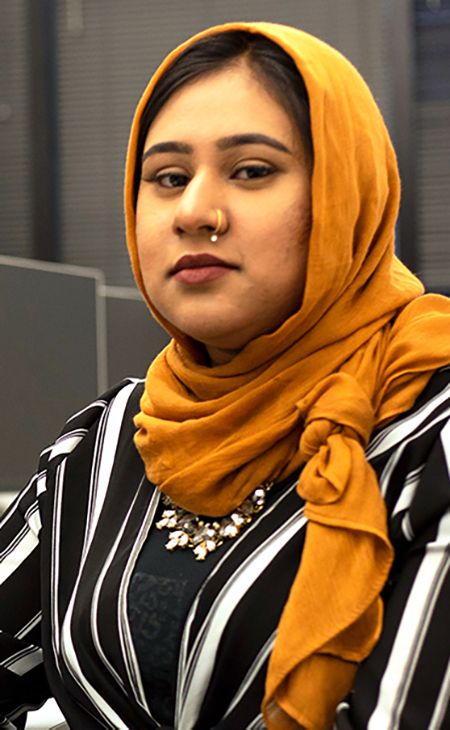 Aiman Moizuddin learned quickly that her education at Illinois Tech would put her on the path to success. She made sure to take full advantage.

On the first day of the first finance course she took at Illinois Tech, Aiman Moizuddin learned a lesson that has stuck with her ever since. Stuart School of Business Clinical Professor John Twombly opened the class by asking a question about money. Do four fives always make a 20?

To the students’ surprise, Twombly then took out a five dollar bill, a five yen bill, and fives in two other currencies. He posed the question again. Do four fives make a 20?

More lessons followed on her path toward graduation, specifically about the need in finance for speed as well as accuracy.

With her final semester and spring 2019 graduation approaching, Moizuddin landed a spot on Stuart’s team in the annual CFA Institute Research Challenge. Stuart's team won the Chicago local level competition for the seventh time in the last eight years, which earned the team a place in the Americas regional competition and a chance to reach the global finals.

“Everyone has something different to offer, and that’s what I really love about the amount of collaboration that occurs here,” she says. “I think the main takeaway was how to work as a team, and I feel very lucky that I got the chance to do that.”

A Skill Set for Career Growth

Helping Others Through a Career in Law