Illinois Tech hired Robert G. Tobey away from Argonne to head the new department. He was known for his work as a co-developer of FORMAC, one of the first systems for symbolic computation.

Anthony Wojcik was hired, with his Ph.D. fresh from the University of Illinois, to develop and teach courses in computer architecture.

The department started to recruit students for its Ph.D. program, newly designed by Robert Dewar and Robert Tobey.

Just to show you that computer scientists are not all work and no play, here's instructor Rick Weiland singing at the weekly coffeehouse at nearby St. James.

The department expanded the Ph.D. program and also hired Wing Huen, who had just received his Ph.D. from Carnegie-Mellon University in operating systems. 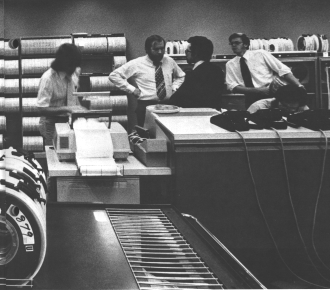 Peter Greene was hired to begin the program in artificial intelligence. He had been teaching at the University of Chicago after earning his Ph.D. in Mathematical Biology there.

Robert Dewar left Illinois Tech for New York University, where he wrote the first Ada compiler (with the help of Edmond Schonberg) and designed and developed the software architecture for several microcomputers.

Martha Evens, fresh from Northwestern University, was hired to teach Dewar's compiler courses, information retrieval, and natural language processing. She was the department's first faculty member with a Ph.D. in Computer Science.

Carma McClure defended the department's first Ph.D. in Computer Science and went on to become a world-famous author and lecturer on software engineering. Wing Huen left for Bell Laboratories, where he designed and implemented the first operating system for the first digital switch.

When Robert Tobey left Illinois Tech, Anthony Wojcik took over as Chair. He served until 1984, when he left for Michigan State University to become its chair of Computer Science.