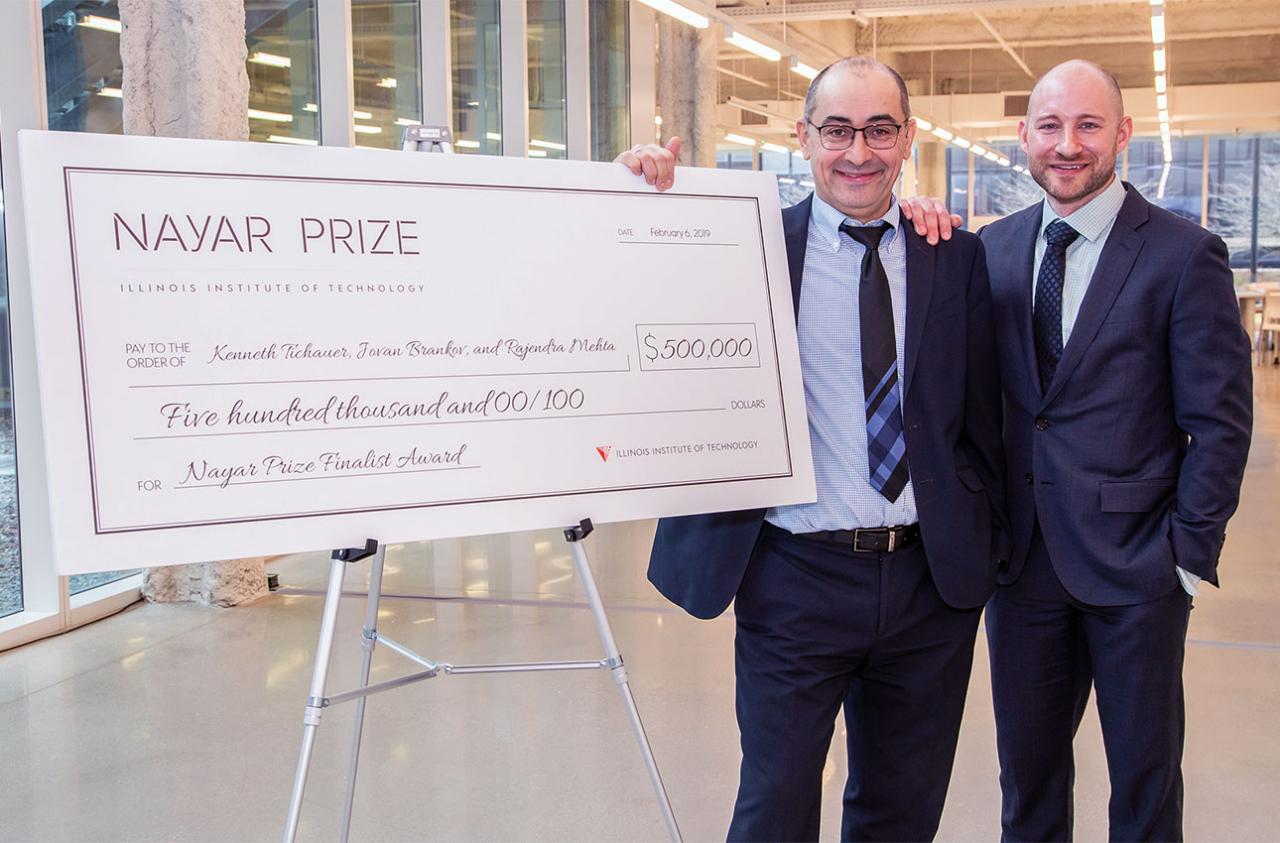 During an announcement ceremony at the Ed Kaplan Family Institute for Innovation and Tech Entrepreneurship, Provost Peter Kilpatrick presented the final award of $500,000 to the team for its development of the Agent-Dependent Early Photon Tomography Cancer Imager. The ADEPT imager uses a groundbreaking, two-step dyeing process and innovative camera technology, allowing pathologists to find tumors in lymph nodes of breast cancer patients up to 10 times smaller than current methods can detect.

“It gives me great pleasure and sheer delight in presenting the Nayar Prize to the ADEPT team,” Kilpatrick says. “It’s really impressive to see the team come together in all phases of this project.”

ADEPT team members say they were thankful for the vision of Illinois Tech alumnus and trustee Madhavan Nayar (M.S. IE ’68) in creating the Nayar Prize and encouraging them to develop a cancer imager that will help save lives.

“The vision to make a societal impact—we were motivated by that,” Tichauer says. “It helped us see that we could make a difference.”

“I don’t see this as the end of the project for us,” Brankov says. “We’re excited to fulfill our vision to get ADEPT into every pathology lab and drug development lab.”

Brankov says the team is “on the brink” of receiving a national grant to continue the research of the ADEPT imager.

Tichauer refined a two-step dyeing process, in which the entire lymph node is dyed. Currently, pathologists will dye small slices of the lymph node and examine about 1 percent of the tissue. Tichauer’s method includes a control dye and another that binds to tumors.

Once the lymph node is dyed, a laser is passed through the sample and a camera captures an image on the other side to see if a specific amount of the binding dye has accumulated on tumors.

The combination of the two processes allows pathologists to find smaller tumors and prescribe a precise and personalized treatment for the patient. Finding tumors earlier can lead cancer patients onto a stronger path of recovery and a longer life.

The Nayar Prize I competition inspired 143 of the roughly 400 Illinois Tech faculty members to form dozens of teams and to submit research proposals. Illinois Tech President Alan Cramb says he was pleased to see faculty of all disciplines working together.

“This prize caused more faculty and staff to work together than any government or corporate grant could,” Cramb says. “When I saw that happen, I said, ‘If nothing else comes of it, this was a success.’”

Nayar says collaboration between faculty members from different departments was an organic consequence of the Nayar Prize.

“I started the prize for three reasons,” Nayar says. “One was to enhance the status and reputation of Illinois Tech. Two was to help create breakthrough innovation. And three was to create results with a societal impact.

“But I think the biggest impact—not taking away from the innovation and other results—is the excitement among faculty collaborating with other fields to conduct research,” he continues. “No longer is this one person’s accomplishment, but the accomplishment of a team.”

In 2015 Nayar (M.S. IE ’68) and his wife, Teresa, on behalf of the Nayar Family Foundation, gave the $1 million gift to fund the Nayar Prize package, challenging university faculty, staff, and students to develop breakthrough innovations that will produce meaningful results with a societal impact.

The prize is awarded in multiple phases as competing teams meet prescribed benchmarks. Phase 1 funding, which awarded $100,000 to three teams, allowed the ADEPT team to build the first prototype and support two students—one working in the imaging lab and one in the wet lab to harvest and prepare tissue samples. The sole recipient of $200,000 in Phase 2 funding, the team used that award to secure grants and further advance the project. The final award of $500,000 can be used at the discretion of the winning team members without restriction.

Also announced on Wednesday was the Phase 3 finalist for Nayar Prize II, a second award competition launched in 2016. The team working on the Data-Driven Crime Prevention Program was awarded $100,000 to continue its research on data analysis with the Elgin Police Department, which includes a legal-ethical framework that respects individual rights. Team members include Miles Wernick, Motorola Endowed Chair Professor of Electrical and Computer Engineering, director of the Medical Imaging Research Center, and professor of biomedical engineering; Lori Andrews, Distinguished Professor of Law and director of the Institute for Science, Law, and Technology at Chicago-Kent College of Law; and Yongyi Yang, Harris Perlstein Professor of Electrical and Computer Engineering and professor of biomedical engineering.