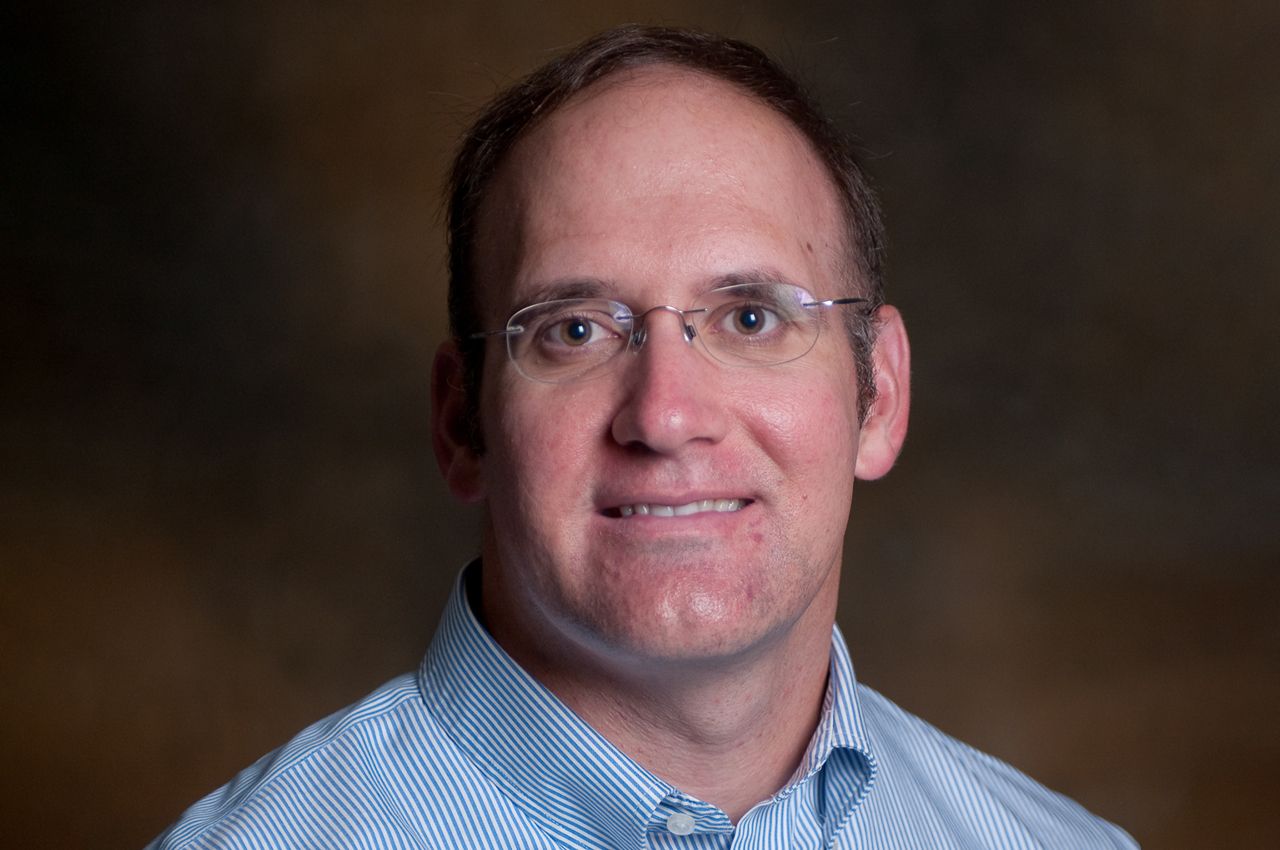 In some ways, Ian Brown is trying to put himself out of business.

As an electric machine designer, he’s building an optimization technique that will do part of his job for him, and while still in the early stages, it has been successful enough to garner industry interest, including gaining funding from Ford Motor Company.

“We’re letting the optimizer come up with clever new ways to design things. It is an aide to human ingenuity; we’re leveraging computational ingenuity to hopefully uncover new features to include in the design of electric machines and improve their performance by fully utilizing the design space,” says Brown, associate professor of electrical and computer engineering at Illinois Institute of Technology.

Electric machines are the broad name for electric motors and generators, which are generally the same device operated in different ways, either turning electrical energy into motion as a motor or the reverse as a generator.

With the increasing electrification of transportation, improving electric machines is critical to the development of electric vehicles, aircraft, and ships. Additional applications such as efficient HVAC systems, robotics and automation, machine tools, and generators also demand higher performance and lower cost electric machines.

The design of electric machines is challenging as there are typically a number of objectives to trade off and constraints to satisfy. In a state-of-the-art electric machine design process, the designer picks certain basic characteristics such as the type of electric machine, materials, and a general geometric template and then works to find a design within those constraints that gives the best performance.

Because many parameters being considered are often interdependent, it is difficult to avoid non-physical geometries and the ranges of the geometric parameters need to be limited to avoid conflicts, restricting the design space which can be explored.

Small features, especially important for controlling mechanical stress and torque ripple, which are variations in the torque over time, are often difficult to identify for inclusion in the template a priori.

To circumvent these limitations, Brown’s project uses topology optimization, a mathematical tool for finding an optimal material distribution in some bounded region of space to maximize or minimize the motor performance within some constraints.

So far Brown has used this technique to come up with designs for rotors, the central component of the electric machine which rotates or spins. The program is given free reign to decide how to optimally distribute material within the bounded region available for the rotor.

Having been involved in the design and programming of several electric-machine design tools using the traditional geometric template-based optimization method, Brown recognized that it’s a time-consuming approach limiting the number of new ideas that get tested.

“This always was a problem and pain point in the optimization of electric machines or really anything when the shape becomes relatively complex,” says Brown. “It frustrated me.”

He first became interested in using topology optimization to solve this in graduate school, and now with recent funding from the United States Department of Energy Vehicle Technology Office and Ford Motor Company, his topology optimization technique skips over the most time-consuming steps of the traditional approach entirely. It also has the added benefit of allowing the computer to come up with its own novel ideas for new design elements or geometric features.

“The topology optimization approach allows us to free-form optimally distributed material in a design domain, where we essentially are depositing or removing materials in each element of the finite element mesh. It’s a totally different approach,” says Brown. “We don’t have any assumed geometric template defined a priori, and it gives a lot more design flexibility. The material, electrical steel or air, in each element in the mesh is determined independently.”

Other researchers have made steps toward using topology optimization for this purpose, but have so far only developed programs that create designs that optimize the magnetic field. This misses a critical consideration: once the component is built, it needs to hold together in the high-mechanical stress environment of a running motor. Without considering the mechanical behavior, magnetic-only optimized designs are not practical for manufacturing or actual application.

Brown’s work is the first to figure out how to include calculations that check both the magnetic field and the structural integrity of the design.

He first looked at the rotor design for a type of electric machine called a synchronous reluctance machine, in which the rotor is simply a shaped iron component, unlike some other electric machines whose rotors include multiple materials.

Without any guidance for what shape to create—just information about how the end result would need to operate—the program came up with a design that was largely in line with what modern electric machines use, while also including some surprising options for how to improve on this.

The standard features the program created included the general shape and the way that the design changed as the specifications changed, such as increasing the thickness of some components when told that it was designing for a higher maximum rotation speed.

“Humans have been pretty clever about figuring out what makes sense and will work. It’s more of the small details that are very difficult as a human to come up,” says Brown. “For example, there are these little notches or bumps along the surface for torque ripple control. How do you optimally shape these flux barriers? It’s not really intuitively obvious.”

These results were published in IEEE Transactions on Magnetics in 2020.

With the success of this first test, Brown has moved on to electric machines with more complicated components.

In 2020 Brown published in IEEE Transactions on Industry Applications, applying topology optimization to a type of electric machine called a wound field synchronous machine, which he has several projects actively working on improving.

This was a challenging development because the rotors on wound field synchronous machines are made from an electrical steel core wrapped in copper coils. This meant introducing a new material into the program and figuring out a way to make the program understand how the electrical steel and copper would be connected to each other in real life.

While Brown’s computational method would typically assume that all materials next to each other are fused together, in a real electric machine the copper coils are held on by varnish, contact with the tip of the rotor core. To include this more complicated material interface, Brown developed new techniques for describing the conditions at this boundary between materials.

Once Brown figured out the right mathematical equations to input to make this work, computer ingenuity came through again.

“On this wound field synchronous machine, it put small little air pockets right along the rotor surface in the center of the pole. We believe it’s trying to control the torque ripple that way,” says Brown. “A priori, I wouldn’t think to do that as an electric machine designer. It’s very good at creating small features that you wouldn’t necessarily think to incorporate.”

For some types of electrical machines, you do not want truly free-form material distribution in the design domain, such as in cases where the machine design includes a permanent magnet. If only topology optimization was used to design the rotor, it would likely find a complicated permanent magnet shape that, while improving performance, would be very difficult and expensive to manufacture.

For these cases, Brown has developed techniques that optimize the size and location of rectangular permanent magnets while continuing to allow the electric steel distribution to be determined through topology optimization.

Brown’s research is still in its early stages. The topology optimization approach comes up with designs that maximize the average torque with a few constraints such as limits that make sure the final design won’t break under the stress of operation and with limits on the acceptable level of torque ripple. For commercial adoption, additional objectives and constraints will need to be considered.

But what makes electric machines so difficult to optimize is that there are tens of interdependent variables that can be considered, and it’s hard to come up with design ideas that improve one aspect of the design without also making another aspect perform worse. Recently, he has also started collaborating with Ford Motor Company to continue the project’s development.

Brown plans to continue adding more parameters to his program to reach even better levels of optimization.

“Longer term, I’m interested in also looking at this for acoustic effects where we incorporate the stator model [a component in electric machines] and potentially do some topology optimization there to control noise, vibration, and harshness,” says Brown.

Brown also plans to eventually make physical versions of these digital designs and find ways to make sure that the program only considers design options that could realistically be manufactured.

“The most exciting thing to me is that it is still in its infancy in terms of a technique, and I can think of myriad ways to improve and expand it,” says Brown.

Disclaimer: “Research reported in this publication was supported by the United States Department of Energy under Awards DE-EE0007798 and DE-EE0008713. This content is solely the responsibility of the authors and does not necessarily represent the official views of the U.S. Department of Energy.”