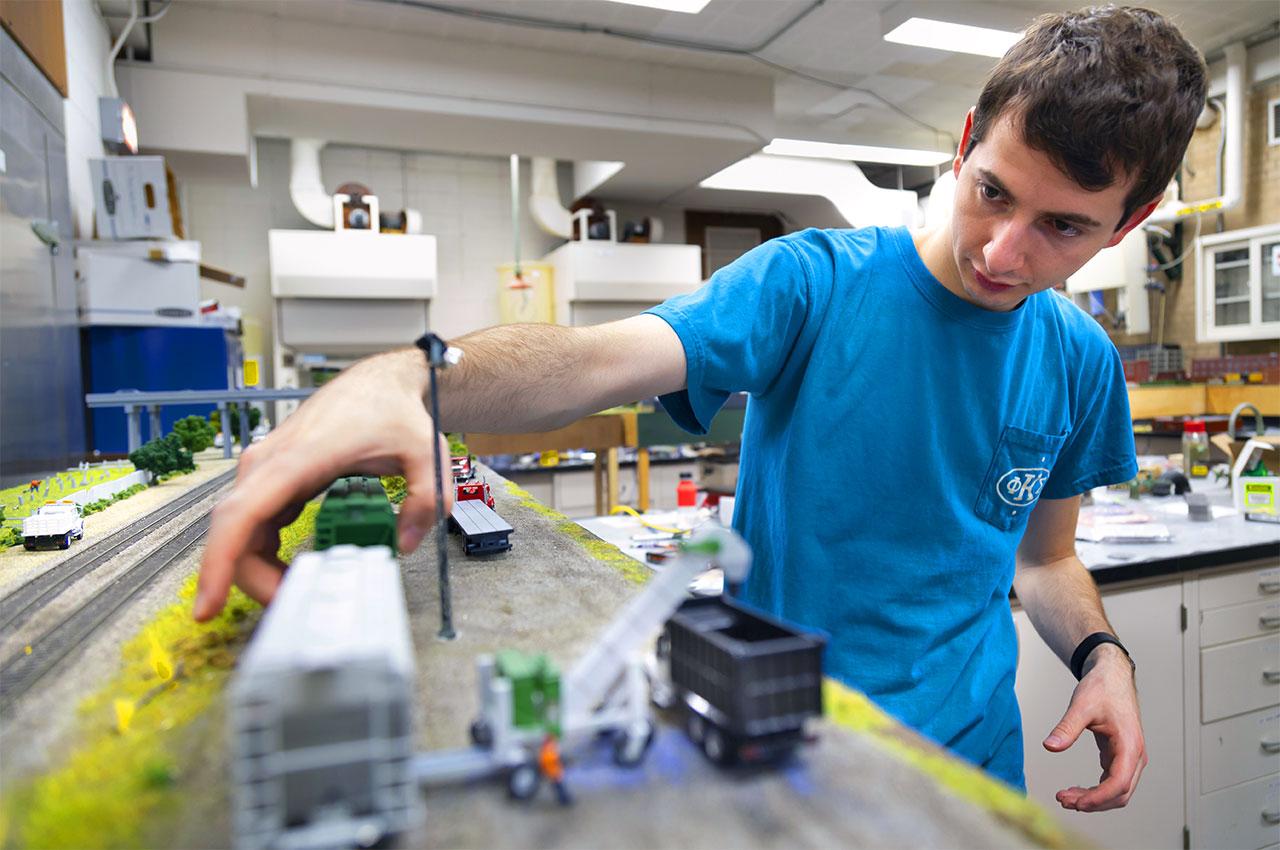 Daniel Rappoport (CE 2nd year), president and founder of the Illinois Tech Railroad Club, sought to share his passion for railroading with fellow classmates and revive the model railroad hobby on campus. With growing excitement, students received permission to use a room in Rappoport’s fraternity house to build a small layout as proof of concept.

“We immediately developed relationships with alumni of the old Illinois Tech Model Railroad Club,” says Rappoport, noting that alumni both donated all the money that allowed them to build their first model railroad concept as well as spent hours mentoring the students.

After the group demonstrated its success and finished their first project, they received funding and space from the university to begin the construction of a full-size model railroad in Tech Park Central. However, within one semester the new model railroad outgrew the room, prompting a second move to its current location in Alumni Memorial Hall. “It has been a gamechanger because we now have four times the square footage to build our model railroad. Our new location has also helped us develop great relationships with the CAEE department faculty,” says Rappoport.

The model railroad project enables members to apply their interests and education to a tangible engineering project. This includes infrastructure design such as track and buildings; electronics hardware and software such as train control and signaling; and operations activities like fleet management, train dispatching, and freight logistics.

He adds, “It’s a really good time to get into railroading. Due to concerns with eco-friendliness, a lot of freight is moving from truck transportation to railroading because it’s four times more efficient.”

So far, the organization has built 76 square feet of model railroad this school year. The model railroad sections are built to a national modular standard so that they can be connected to the sections of many other model railroad clubs in the country to form a large, collaborative railroad. Students are planning a national setup on Illinois Tech’s campus this September, with 13 clubs from Texas to Minnesota signed up to attend.

One of Rappoport’s most memorable experiences is a recent collaboration with the Will County Railroad Association in Joliet. He adds, “By participating in the national community, the sections we build here are going to be part of something bigger than we can accomplish just by ourselves.”

In addition to restarting Illinois Tech’s legacy with model railroading, Rappoport pushed a stronger focus on professional development. With the help of civil, architectural, and environmental engineering faculty, the club was chartered as an official student chapter of the American Railroad Engineering and Maintenance-of-Way Association, and hosts guest speakers, organizes tours of railroad infrastructure, and represents the university at the railroad industry's annual conference.

Rappoport shares, “From a professional side, all of the exposure opens doors for students who never realized that, for example, there are jobs in cybersecurity within the railroad industry.”

Donald Grabowski and Laurence Rohter, adjunct faculty in Armour College of Engineering, have been instrumental in advising executive meetings and providing the group with countless connections and professional advice. “They give us perspective from the industry and have reached out to their own personal networks to organize opportunities we otherwise would not be able to accomplish,” says Rappoport.

Rohter explains, “Right now the hottest place to be in infrastructure is railroading.” He notes, “If you look at the American Society of Civil Engineers report card you see that the highest and only B grade is railroads.After a period of decline there was a renaissance brought on by the Staggers Rail Act of 1980 where the railroad [industry] could make their own decisions on investment and pricing.”

Grabowski shares that most professionals in the field, at every level, feel indebted to the industry and compelled to help the next generation. “I’ve never met a bigger group of railroad enthusiasts [who] have taken what began as a childhood fascination and turned it into a strong understanding of railroad operations and how to replicate it on a miniature scale,” says Grabowski. He adds, “What I like about the [railroad] club is that it’s a cross-reference of students across the university, from engineering to business, and that’s how the railroad industry really works.”

“The combination of being able to talk shop and have a better understanding of railroading on top of our academics gives our members an advantage in the job market,” says Rappoport, noting that he will be interning with Union Pacific Railroad in Omaha, Nebraska, this summer.

He adds, “Our members really see a future in this industry as we go into our careers.”