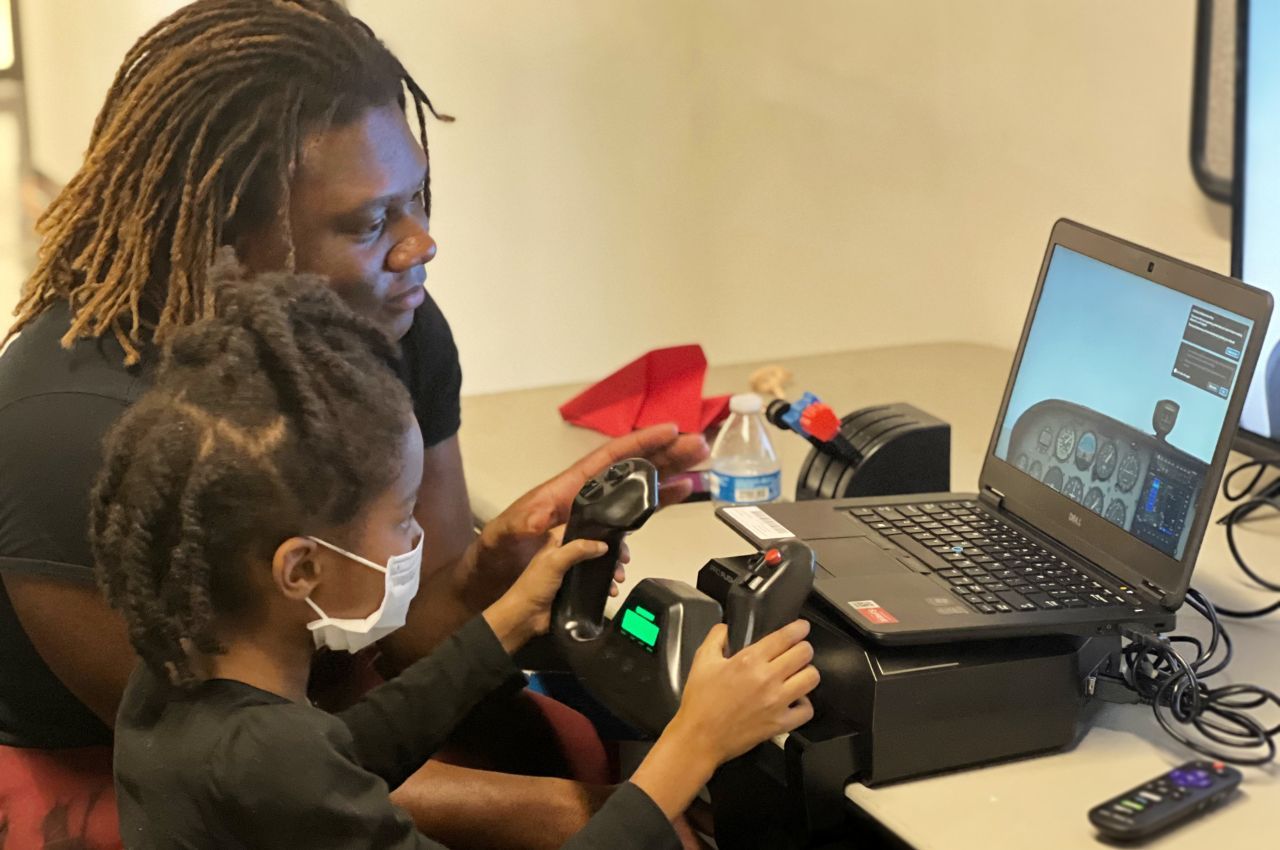 The group of Illinois Institute of Technology professors knew that they’d need props. If they were to have any hope of keeping the attention of dozens of K-12 students, most of them from the university’s surrounding neighborhoods on Chicago’s South Side, they’d have to bring their “A” game.

A nonprofit provided some flight simulators to get things started. But the more rudimentary props—red plastic cups wrapped in rubber bands, sent spinning into the sky—turned out to be surprising hits. Others brought samples of metals like titanium, used in the construction of aircraft. Another brought a pair of nitro-powered, remote-controlled planes—a three-foot dogfighter and a five-foot scale aerobatic plane—to demonstrate the movement of control surfaces and how they affect flight.

That “A” in their game stood for aviation and aerospace, two fields known for high-flying careers but low diversity numbers. In total, 64 students—most in the sixth through eighth grade, with a large contingent even younger than that—attended the Family Fun Day event over two weekends in October 2022 at Illinois Tech. Students came from the Chicago neighborhoods of Englewood and Humboldt Park; the Olive-Harvey College network; the cities of Gurnee, Illinois, and Evanston, Illinois; and a few from as far as Indiana.

“The reason our department is really interested in this is that we are passionate about aerospace, and we believe that there is a role that our department can play in reaching out to our (Bronzeville/South Side) community, both in making them aware of what aerospace is about and what the students in our community can do,” says Seebany Datta-Barua, an associate professor in Armour College of Engineering’s Department of Mechanical, Materials, and Aerospace Engineering.

Several years ago, Datta-Barua was appointed to lead a new diversity, equity, and inclusion committee for the MMAE department. She, along with faculty and students on the committee, tried to figure out ways to improve the department’s diversity.

Then, in March 2022, Datta-Barua attended one of the Illinois Tech Office of Community Affairs and Outreach Programs' AeroSTEM expos, where she met with staffers at the AeroStar Avion Institute, a Chicago-based nonprofit that serves as an educational pipeline for underrepresented groups. Yes, the organization was focused on aviation, which is different from aerospace. But the two fields have similarities—and AeroStar’s mission resonated with her.

“Its mission is just getting young people interested in aircraft, and that’s something we’re very much on board with,” Datta-Barua says. The fact that they focused on minority-majority neighborhoods, whose residents are underrepresented in both the aerospace and aviation industries, also helped.

Tammera Holmes, AeroStar’s founder and CEO, notes that she grew up in the Chicago suburbs, and “fell in love with aviation” at the age of 16. She was one of only two African-American women in Southern Illinois University’s aviation program, and says she experienced discrimination and lack of support during her academic career. But a close adviser convinced her not to quit, and to pursue aviation management.

After graduation, she spent 11 years at an Illinois firm as an airport planner, and “I was the only African American who wasn’t taking out trash or making coffee the last seven years I was there.”

In 2008 she launched AeroStar Consulting Corporation, which started as a consulting firm but has since transformed into AAI. It currently provides K-12 programming out of Olive-Harvey, which is part of City Colleges of Chicago.

“It’s an honor to partner with higher education institutions that understand that early access is the key to long-term success when it comes to STEM,” Holmes says of working with Illinois Tech, with whom she has been partnering for its AeroSTEM expos since 2017. This year is the first year the AeroStar has sponsored a Family Fun Day, which is a partnership with Illinois Tech’s Community Affairs office. AeroStar provided the flight simulators and staff for the event.

“It was such an honor to partner with the AeroStar Avion Institute in hosting this year’s Family Fun Day on Illinois Tech’s campus,” says Kevin W. Cassel, acting dean of the Armour College of Engineering. “For our faculty and students who participated, it was a reminder of the child-like joy that attracted us to the important field of aviation, and for the students and families who attended, it was an opportunity to explore this exciting industry through hands-on activities and demonstrations.”

King Ankobea-Ansah (Ph.D. MAE Student), a student member of the DEI committee alongside Datta-Barua, volunteered on both days of the event, helping students work through lessons in classroom-style learning environments at Siegel Hall on Illinois Tech’s Mies Campus.

“As a strong STEM advocate, the euphoria of seeing the diverse backgrounds of the kids, their sparkling interests in the activities and their overall curiosity in aviation/STEM was satisfying and refreshing,” says Ankobea-Ansah. “In fact, seeing their excitement evoked nostalgic emotions about my childhood aerospace and aviation curiosities.”

“I never had that 100 percent support…as a kid,” he adds. “I believe these experiences will have a compounding effect in the future, and provide an advantage in bridging the minority representation chasm that exists in STEM.

“The world needs it!”