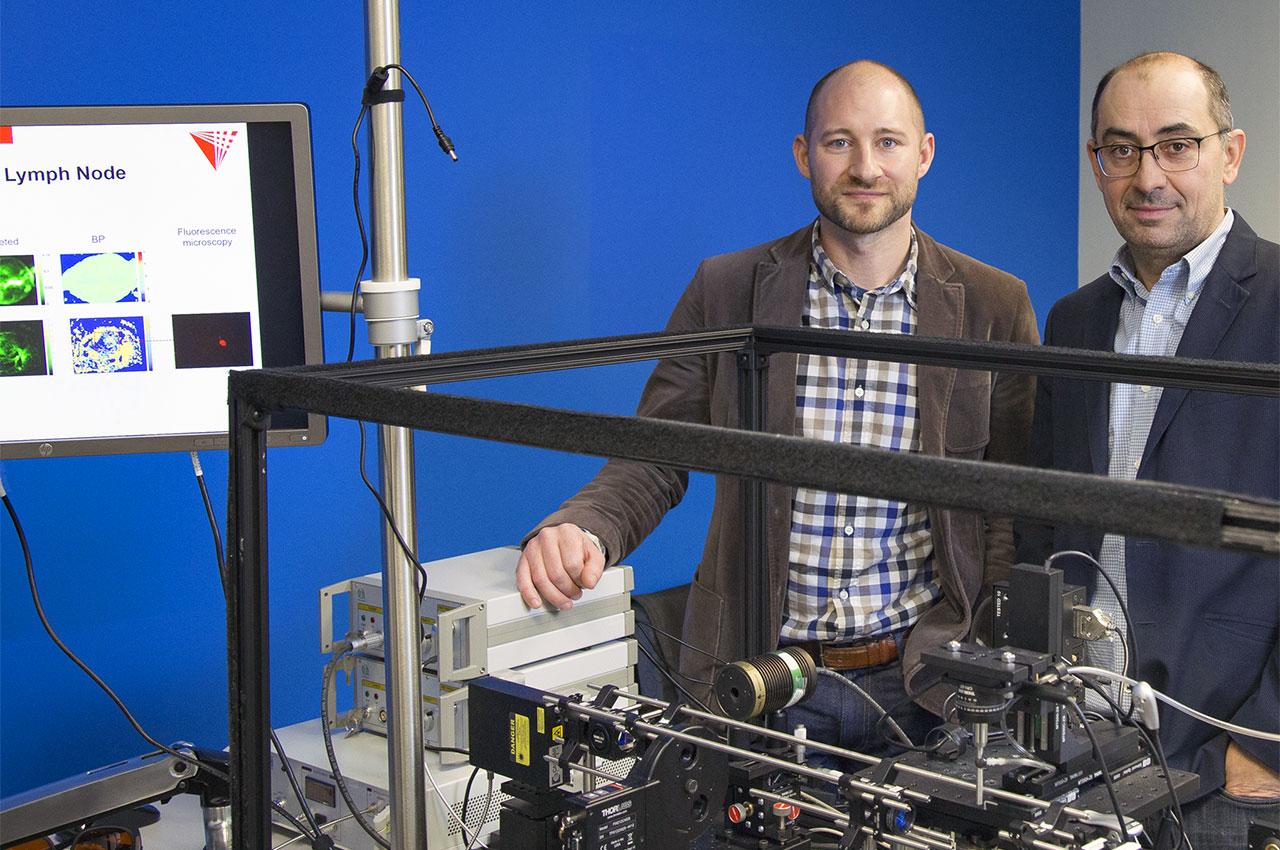 Two Illinois Institute of Technology professors are accelerating the pace in the race to find tumors in the earliest stages, earning them the final award in the first $1 million Nayar Prize package.

“We went in with a specific application, and that was to improve diagnosis of stage 3 breast cancer,” Tichauer says. “It’s important because physicians are forced to decide to start chemotherapy or not after they have completed the removal of the breast cancer or after a mastectomy.”

That decision is made, in part, by determining if the cancer has spread to the lymph nodes.

The current procedure used to make that assessment involves slicing a sample of a lymph node, dyeing it, and then making a diagnosis. Tichauer says this process can take up to 24 hours.

“The problem is that they will cut two or three slices and look at only the surface,” Tichauer says. “So they are looking at less than 1 percent of the tissue volume.”

The ADEPT Cancer Imager uses a two-step dyeing process of the whole lymph node—one a control dye and another that binds to tumors. After the dyeing process, a laser is passed through the lymph node, creating an image showing whether there is specific accumulation of the binding dye on tumors.

By capturing an image of the entire lymph node, pathologists have a better chance of spotting tumors. Team members estimate 40,000 more women will be properly diagnosed annually using the ADEPT imager.

“In 10 minutes the imager will map the cancer within a lymph node in 3-D,” Tichauer says. “Then a pathologist can guide the cut of the node and verify if it is cancer.”

Another advantage of the ADEPT imager is its ability to detect smaller tumors, because it provides a more precise image.

Brankov says when light passes through a tissue sample, it scatters. Most cancer screening imagers capture at least some of that scatter, which blurs the image. The ADEPT imager does not.

“You shine a laser through the tissue and put the camera on the other side,” Brankov says, describing both the current and ADEPT procedures. “The tissue acts like fog (air with water droplets), so it creates a hazy image due to the light scattering. [Our] camera only looks at light going in a straight direction.”

The result is a sharper image—one that detects tumors approximately 10 times smaller than what current common methods find. It also gives the pathologist a better understanding of the tumor’s individual makeup.

“Cancer is not just one type of cell,” Brankov says. “But the drugs used target one type of cell. This system can help determine the array of cell types that may be present in a specific cancer. That way the patient can receive multiple drugs so all cancer cell types are targeted.”

Using the results from an ADEPT imager, a pathologist can prescribe a precise and personalized treatment to attack smaller tumors, which can give patients a better chance of recovery and living a longer life.

The team’s progress stemming from its participation in the Nayar Prize competition led Tichauer to earn a prestigious Faculty Early CAREER Development Award from the National Science Foundation in 2017. The three-year, $568,245 CAREER Award has supported the team’s advancement of the ADEPT imager, which has proven to find tumors in lymph nodes from pig and human cadavers. The next step is to conduct a clinical study comparing the results from the ADEPT imager to conventional screening methods.

The team has partnered with Dr. Jesse Dirksen, a breast cancer surgeon with Sanford Research in Sioux Falls, South Dakota, to initiate the clinical study.

In 2015 Illinois Tech Trustee Madhavan Nayar (M.S. IE ’68) and his wife, Teresa, on behalf of the Nayar Family Foundation, gave the $1 million gift to fund the Nayar Prize package, challenging university faculty, staff, and students to develop breakthrough innovations that will produce meaningful results with a societal impact.

The prize is awarded in multiple phases as competing teams meet prescribed benchmarks. Phase 1 funding, which awarded $100,000 to each of three teams, allowed the ADEPT team to build the first prototype and support two students—one working in the imaging lab and one in the wet lab—to harvest and prepare tissue samples. The sole recipient of $200,000 in Phase 2 funding, the team used that award to secure grants and further advance the project.

The final $500,000 Nayar award can be used at the winners’ discretion, with absolutely no restrictions.