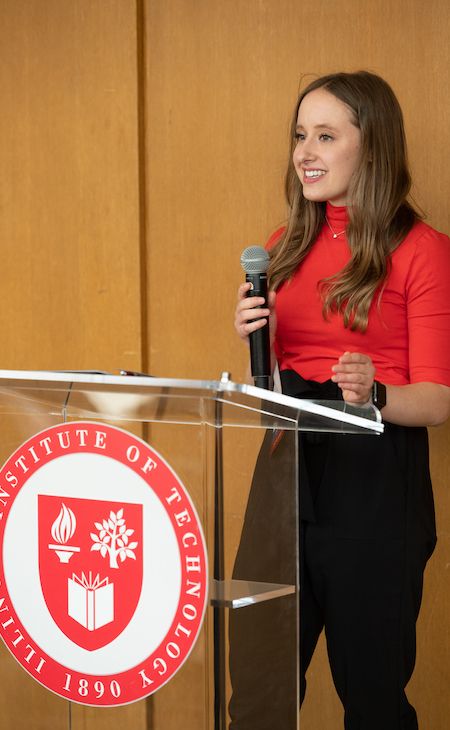 How hands-on experiences prepare you for the workforce

As a technical program manager at Tesla, Ava Kelly is responsible for the beginning-to-end process of launching new power electronics products, starting from the initial concept and taking a product all the way through testing, production, manufacturing, and servicing.

One of the projects that she’s involved with is the Tesla Semi, working on the electrification of combination trucks, which account for around 18 percent of United States vehicle emissions.

“I think the sustainability benefits from that program really set an example for how we need to change the way people consume energy,” says Kelly.

She says that every day at her job is different, with tasks ranging from conducting reliability testing to coordinating with manufacturers.

“What I like about working here is that we’re trying to change the game, and do what’s most innovative in our field,” says Kelly. “I’m a little biased, but I get to work with some of the best engineers, and I get to be a part of exciting things that no one’s done before. It’s truly a humbling experience.”

Kelly first joined Tesla as an intern before being hired as a full-time employee after graduation.

“Having an internship lets you see what an engineer does on a day-to-day basis,” says Kelly. “The problems that you see are on a much larger scale than what you see in school. When you’re looking at a problem in industry, there are multiple factors you have to consider, beyond engineering for functionality. Can whatever we change be manufactured? How is this change going to impact a different cross-functional team? So [an internship] gives you a broader perspective on how to view and tackle a problem, such that the solution can be efficiently implemented.”

Kelly joined Illinois Tech Motorsports as a first-year student and took on various leadership roles, including as 2020–2021 president, throughout her time on the team. She says the organization was “a perfect starting point” because working at Tesla is “taking what we did in motorsports and scaling it times 1,000.”

At Illinois Tech, Kelly was a Camras scholar, and she completed the Accelerated Master’s Program in four years.

“It’s a huge opportunity to start taking master’s classes so early in your education,” she says. “You get to really dive into research and application and see how what you’re doing in undergrad makes its way into the real world. I honestly don’t see a reason why you wouldn’t do it.”

With this strong foundation, Kelly says she’s on her dream path.

“Some of my co-workers can point out their product on their friend’s car, and I think that is so neat,” says Kelly. “That’s the kind of impact we want to have as engineers.”