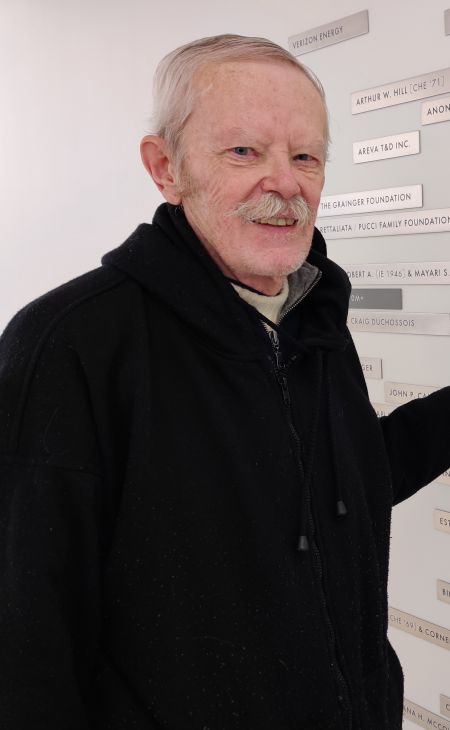 A Career of Imagination and Persistence

Like many scientists of his generation, Robert Lyczkowski says the launch of Sputnik 1, the first human-made satellite to orbit Earth, changed his life. “It started a whole push for science,” he says. “Sputnik 1 was my raison d’etat for going to college and becoming an engineer.”

Lyczkowski sees the events that brought him to Illinois Institute of Technology as fate. After initially rejecting an offer of graduate admission from the university, he was offered a generous fellowship in the gas engineering department that convinced him to change his mind. As a result, he met and started working with Dimitri Gidaspow, at the time an adjunct professor in the department, who would become a lifelong collaborator as they worked together to build a theory of multiphase flow.

Multiphase flow describes the movement of a fluid that contains a mix of materials in different phases—gas, liquid, or solid—like how boiling water running through a pipe contains liquid water mixed with gaseous bubbles. The mix of material phases changes how the fluid moves and flows.

While there has been a well-established set of equations to describe a single phase of material flow for quite some time, Lyczkowski, Gidaspow, and their collaborators were the first to create a theoretical foundation for describing multiphase flow.

As a graduate student at Illinois Tech’s Institute of Gas Technology and later as an adjunct professor, Lyczkowski worked on the theory in its very early stages with the oil and gas industry in mind. Most wells produce both oil and gas when drilled, so understanding multiphase flow was critical to managing their output.

But in the process of doing so, Lyczkowski helped create a widely applicable tool. “For a long time my interest was hemodynamics,” says Lyczkowski, referring to calculations modeling the flow of blood, a fluid that is primarily a mixture of plasma and red blood cells.

“Using multiphase flow, we can explain things in blood flow that were not explainable in the past,” Lyczkowski says. His work in this area “established a completely new paradigm for analyzing the migration of blood-borne particulates.”

The model developed by Lyczkowski was used to show how and why cells in the blood end up sticking to and building up along the walls of arteries as blood flows through them, and what conditions make the buildup worse, potentially leading to plaque formation.

While Lyczkowski worked in both industry and academia, he spent most of his career working as a research scientist at Argonne National Laboratory just outside of Chicago.

Lyczkowski has continued to be closely involved with Illinois Tech, providing funding opportunities for students, establishing a new lecture series in the Department of Chemical and Biological Engineering, and funding the establishment of the department reading room.

He says, “It’s because I got a nice fellowship from the Illinois Institute of Technology that allowed me to do my master’s and Ph.D. It was very generous, and that’s the main motivation for my contributions now. I don’t want students to leave because of financial problems; I want them to stay and work in interesting areas and move things forward.”

Lyczkowski helped establish both the Gidaspow Fellowship and Lyczkowski Fellowship, which annually supports graduate students at Illinois Tech working on multiphase flow and computational fluid dynamics. He says he’s eager for more people to utilize the theory across different applications, especially in bioengineering.

“There are so many things multiphase flow can model if you have the imagination and persistence to try it,” says Lyczkowski.