While there is currently no cure for blindness, a first-of-its-kind artificial vision system has undergone its first successful implantation, bringing with it the potential to restore partial vision to people who have lost their sight. 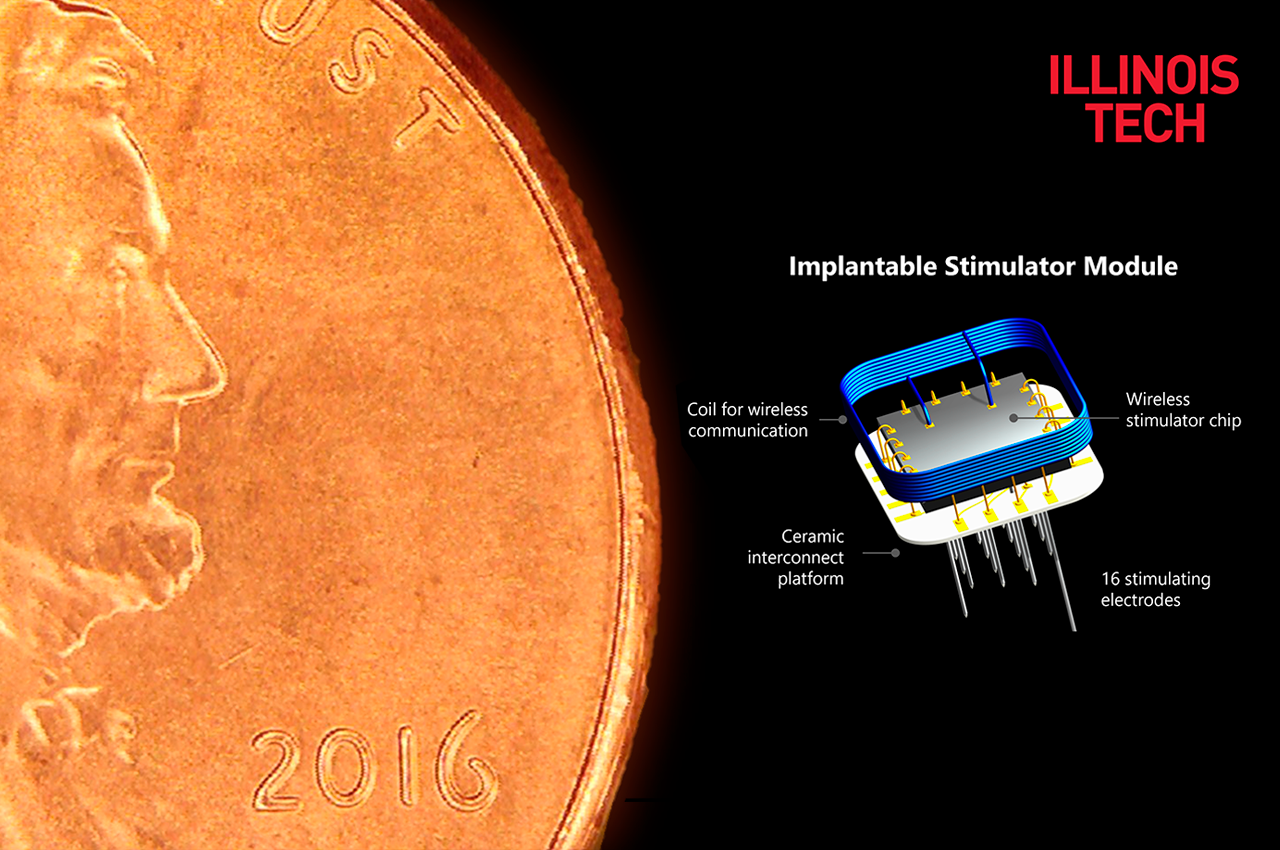 CHICAGO—February 16, 2022—The Intracortical Visual Prosthesis (ICVP), an implant that bypasses the retina and optic nerves to connect directly to the brain’s visual cortex, has been successfully surgically implanted in the ICVP study’s first participant at Rush University Medical Center this week. This surgery is part of a Phase I Feasibility Study of an Intracortical Visual Prosthesis for People With Blindness.

The ICVP system was developed by a multi-institution team led by Philip R. Troyk—executive director of the Pritzker Institute of Biomedical Science and Engineering at Illinois Institute of Technology, professor of biomedical engineering—and represents the culmination of nearly three decades of Illinois Tech research dedicated to ultimately providing artificial sight to those with blindness due to eye disease or trauma.

The Intracortical Visual Prosthesis System is the first intracortical visual implant to use a group of fully implanted miniaturized wireless stimulators to explore whether individuals with blindness can utilize the artificial vision provided by this approach.

This visual prosthesis system allows devices to be permanently implanted, which is a unique advantage that provides researchers ample time to explore how the device can effectively work, and for the recipient to learn how the device can be useful.

During the preclinical phase, the Illinois Tech team worked with Rush University Medical Center neurosurgeons to develop and refine surgical procedures, culminating in this week’s successful implantation of 25 stimulators with a total of 400 electrodes in an individual with blindness. The clinical phase is aimed at testing whether this prosthesis will provide study participants with an improved ability to navigate and perform basic, visually guided tasks. Testing will commence at The Chicago Lighthouse after a 4-6-week recovery period.

“This is an incredibly exciting moment, not just for the field of biomedical engineering, but more importantly for people with blindness and their loved ones around the world,” says Troyk.

Since many individuals affected by total blindness do not have intact retina or optic nerves but retain the visual cortex—the area of the brain that allows people to see—an intracortical visual prosthesis may be the only possible advanced visual sensory aid from which they can benefit.

“This operation represents a critical step in the decades of research by our whole ICVP team in our efforts to bring sight to blind patients,” says Dr Richard Byrne, the neurosurgeon at Rush University Medical Center who performed the surgery.

Illinois Tech is collaborating with Rush University Medical Center, The Chicago Lighthouse; the Wilmer Eye Institute at Johns Hopkins; the University of Texas at Dallas; Microprobes for Life Science; Sigenics, Inc.; and The University of Chicago on the initiative, with Troyk serving as the principal investigator.

“For people who are completely blind, gaining even a little bit of light perception can make a huge difference,” said Janet P. Szlyk, President and CEO of The Chicago Lighthouse. “The findings from this research will help pave the way for other groundbreaking advancements in blindness research and vision restoration.”

Funding for this study was provided by the National Institutes of Health’s Brain Research through Advancing Innovative Neurotechnologies® (BRAIN) Initiative, the Department of Defense and from private donors.

Image: rendering of the Intracortical Visual Prosthesis (ICVP) wireless implantable stimulator model alongside a penny for scale. For high-resolution images suitable for use in publication, please contact Petra Kelly at pkelly6@iit.edu

Research reported in this publication was supported by the NIH (BRAIN) Initiative under Award Number UH3NS095557. The content is solely the responsibility of the authors and does not necessarily represent the official views of the National Institutes of Health.

Dr Philip Troyk, executive director of the Pritzker Institute of Biomedical Science and Engineering, professor of biomedical engineering at Illinois Institute of Technology

Dr Janet Szlyk, president and CEO of The Chicago Lighthouse

Rush University Medical Center is an academic medical center that includes a 671-bed hospital serving adults and children, the 61-bed Johnston R. Bowman Health Center and Rush University. For more than 180 years, the Medical Center has been leading the way in developing innovative and often life-saving treatments. Today, Rush is a thriving center for basic and clinical research, with physicians and scientists involved in hundreds of research projects developing and testing the effectiveness and safety of new therapies and medical devices. The Medical Center also offers more than 70 highly selective residency and fellowship programs in medical and surgical specialties and subspecialties. In addition to its mission in patient care, education and research, the Medical Center maintains a strong commitment to the community. Rush reaches out to the Chicago community through offerings such as the Rush Community Services Initiatives Program, an umbrella for several student-led outreach programs designed to address the social and health care needs of residents in neighboring communities.

The Chicago Lighthouse is a world-renowned social service organization serving the blind, visually impaired, disabled and Veteran communities. Recognized as a pioneer in innovation since 1906, The Chicago Lighthouse provides vision rehabilitation services, education, employment opportunities and assistive technology for people of all ages.