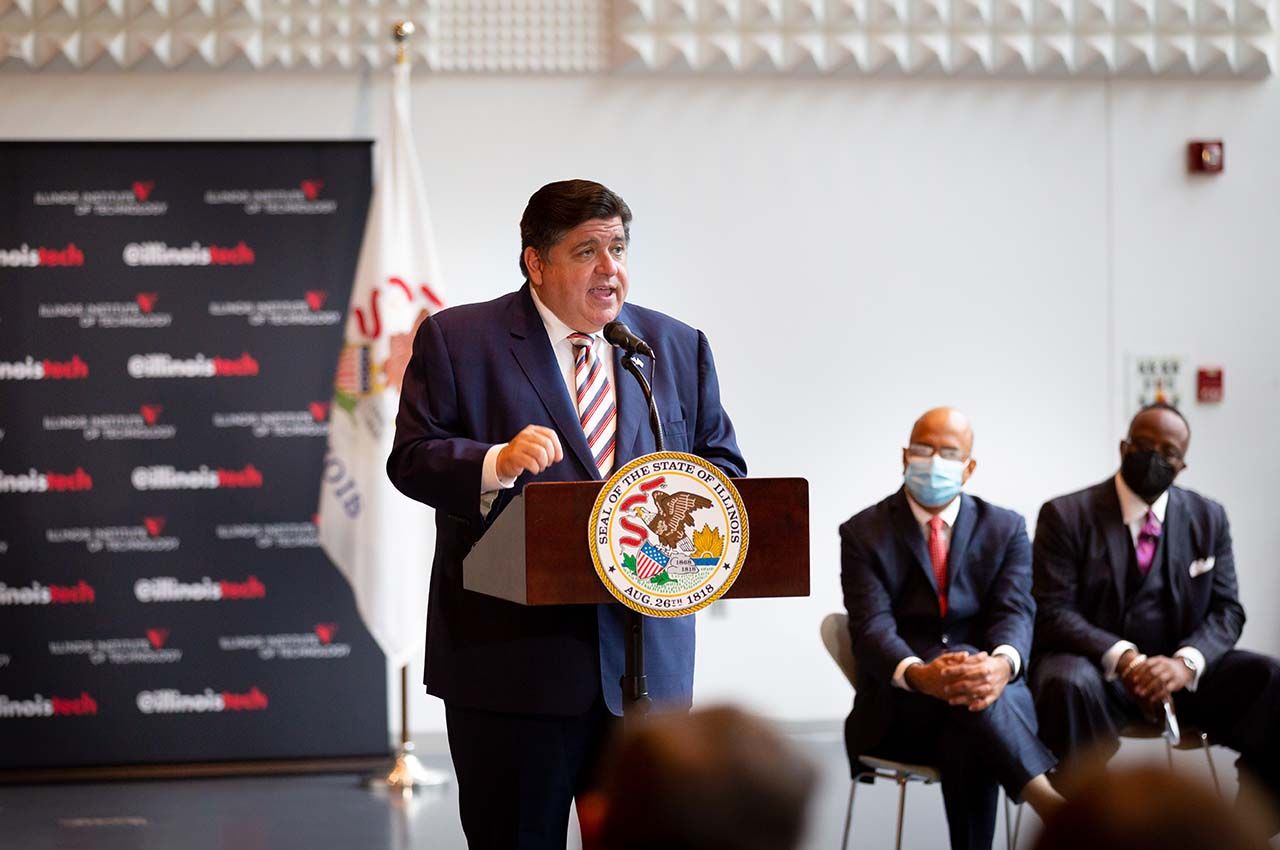 During a visit to Illinois Institute of Technology’s Mies Campus in Chicago, Governor J. B. Pritzker announced that the State of Illinois would be providing $1.5 million to the Pritzker Institute of Biomedical Science and Engineering to renovate its wet lab facilities and establish the Neurotissue and Organoid Innovation Laboratory (NOIL). In addition, $5 million in funding was announced to enhance the campus microgrid.

“Our state is a national hub for entrepreneurship and innovation because of leaders like Illinois Tech paving the way forward for the talent and technology of tomorrow. The more that we can do to support your mission here at Illinois Tech, the better off we’ll all be in the state of Illinois and in the United States,” says Pritzker. “This investment creates opportunities to advance IIT’s research and to provide a range of much-needed scientific, regulatory, and business development services to startups investing in cutting-edge research.”

Pritzker selected Illinois Tech as one of eight wet labs across the state to receive funding through the Rebuild Illinois Wet Lab Capital Program, and Illinois Tech will match the $1.5 million that the state provided.

Pritzker says he believes this funding for Illinois Tech serves as an investment not just in the university but in its broader community, which includes its partner institutions such as Malcolm X College, whose representatives attended the governor’s announcement.

“Today’s grants are an exemplification of what happens when a very supportive government helps higher ed do what it does best by bringing people together and by doing cutting-edge research that solves the grand challenges of our times while at the same time empowering diverse learners with the skills so that they can thrive in the future world,” says Raj Echambadi, president of Illinois Tech.

NOIL will offer researchers, medical startups, and companies across the country access to advanced equipment and facilities to conduct fundamental studies supporting the development of novel medical therapies.

Executive Director of the Pritzker Institute, Robert A. Pritzker Endowed Chair in Engineering, and Professor of Biomedical Engineering Philip Troyk, who has developed a first-of-its-kind visual prosthesis system, says, “Making that transition from an idea to a clinical deployment is not easy. Illinois Tech is launching an initiative that will assist those who are developing these novel therapies in order to navigate the pathway from concept to clinic.”

As part of the Illinois Tech and City Colleges of Chicago partnership, Malcolm X College will provide its students with opportunities to learn and conduct research in the renovated wet lab space.

David Sanders, president of Malcolm X College, says, “Illinois Tech has a history of working with City College faculty to develop transfer agreements and offering City College students generous scholarships. Our involvement in the wet lab research space is the next step in our powerful, powerful relationship.”

Also announced during the governor’s visit was new funding for the Illinois Tech campus microgrid, which is one of the nation’s first functional smart microgrids. This support will allow Illinois Tech to construct four new loops in the system, providing power to each building from two directions, increasing the reliability of the microgrid as a whole, bringing the total number of loops on campus to seven.

Mohammad Shahidehpour, Distinguished Bodine Chair Professor in Illinois Tech’s Armour College of Engineering and director of the Robert W. Galvin Center for Electricity Innovation, says, “This is a living lab to the extent that we bring students to it, we educate them, we teach them how to serve the world, and we let them go and serve basically to the nation and other countries.”