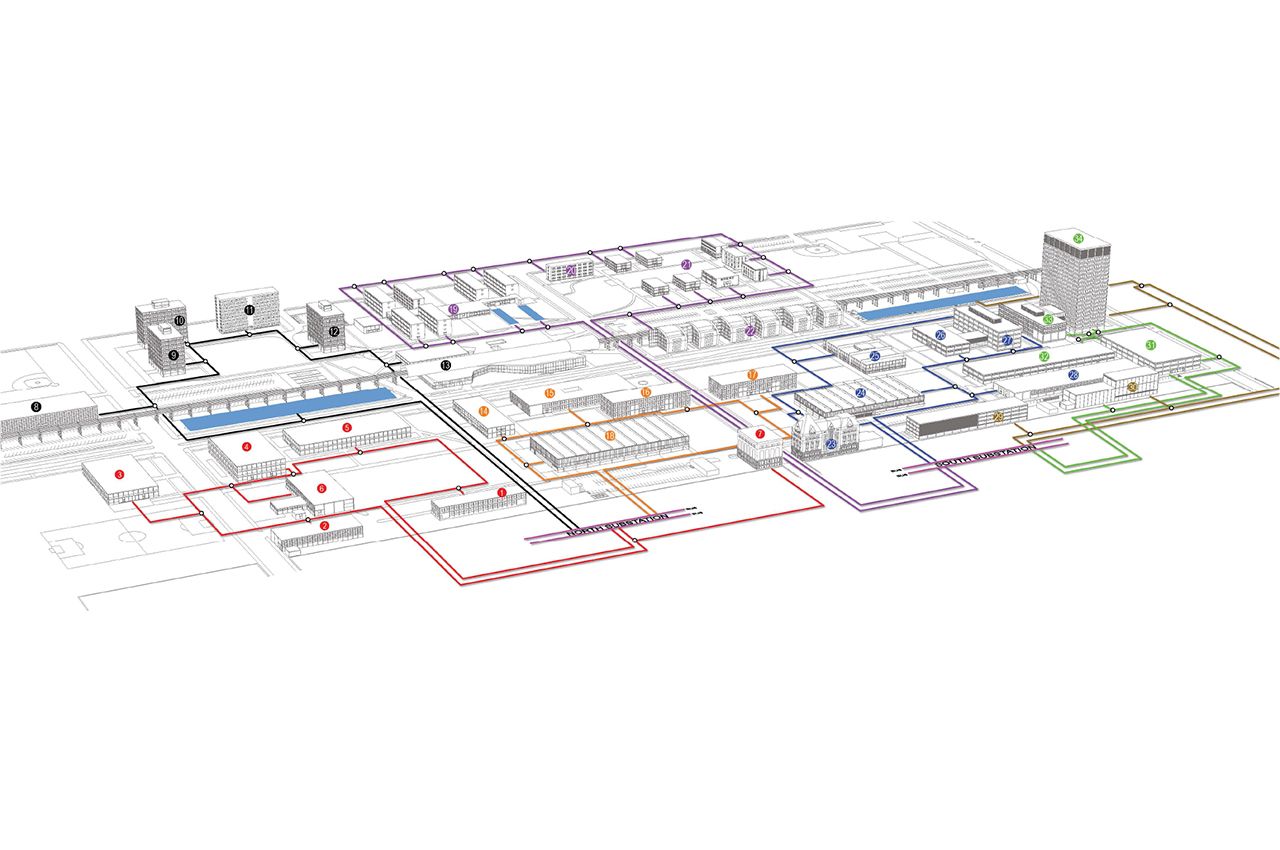 In the early 2000s, the future of Illinois Institute of Technology’s electrical supply was at a crossroads. Power demand on the university’s Mies Campus was reaching the limits of what the existing power substations could handle, and the university was considering a $5 million investment into a new substation that would allow its campus to draw more power from an electric utility.

However, with outages occurring on campus multiple times per year and causing hundreds of thousands of dollars in damage, the university decided to shift away from a reliance on external power and to invest in a bold new idea: building its own electricity infrastructure, completely controlled by the university at every stage, from generation to delivery.

University Distinguished Professor and Bodine Chair Professor Mohammad Shahidehpour had already been making models to figure out how a system like this, now widely known as a microgrid, might work. Supported by the $5 million that would have gone toward the new substation as well as an $8 million grant from the United States Department of Energy, in 2008 Shahidehpour embarked on developing one of the first microgrids in the nation.

With the first phase completed in 2013, Illinois Tech is now home to the nation’s first functional smart microgrid. It has become a cornerstone of research and development at the university and the paradigm for other microgrids that have followed.

The microgrid has saved Illinois Tech $10 million over the past 10 years, including an average of $200,000 per year in energy savings. It has provided eminently reliable power on campus, transitioned more of the university’s power to sustainable sources, and served as an invaluable learning facility for Illinois Tech students and the larger Chicago community.

In 2021 Shahidehpour was awarded $5 million by the State of Illinois to install four new loops in the system over the next two years, completing the original vision for the microgrid and further increasing the system’s reliability.

“If you watch the news these days about hurricanes hitting the southern states and see the level of devastation caused by the storms, then you realize the importance of having a resilient grid that can support your critical needs such as hospitals, fire stations, and shelters in such emergency situations,” says Shahidehpour.

A Grid of One’s Own

Fundamentally, a microgrid is a self-sufficient energy system that serves a discrete area. They are typically still connected to the main utility, but must be “islandable,” meaning they can disconnect at will and maintain operation independently. By 2013, Shahidehpour had accomplished this on Mies Campus.

For decades, Illinois Tech had owned and managed campus power from the point it arrived in the two on-campus substations that received power from the utility company. With the introduction of the microgrid, battery storage, wind turbines, flywheels, and solar photovoltaic power generation capabilities were added to the campus to give the existing thermal power generation the ability to fast-start on demand. In addition, three nanogrids were added to the campus microgrid in order to enhance the reliability of the electric power system on Mies Campus.

Every microgrid is unique to the needs and priorities of its community, and the Illinois Tech microgrid is built to emphasize reliability. As such, the microgrid is designed in a loop system with redundancies to ensure constant power delivery.

Conventionally, power is distributed using a radial system, where buildings in a series are supplied power one after another in a row. If a power failure occurs in the first building in the chain, all subsequent buildings also lose power until the problem in the first is resolved.

In contrast, a looped system connects both ends of the chain to the main power source. Under normal conditions, electricity flows in one direction along the chain as is done in the radial system. But if a problem occurs in one building, power can be supplied from either end of the loop, letting all other buildings remain operational.

Each loop utilizes a high-reliability distribution system (HRDS), or ‘smart switch,’ that operates as the brains of the loop, identifying, sequestering, and rerouting power flows when necessary, “essentially functioning as a self-healing circuit,” says Shahidehpour.

Much of the design and development for the microgrid has been driven by Ph.D. students in the Department of Electrical and Computer Engineering.

“We have converted the campus to a living laboratory in the sense that right now we practice what we preach,” says Shahidehpour. “We go to teach our classes, and we tell students about these ideas. Now, we can demonstrate at all levels how this technology works. “

Connections to the Future

At Illinois Tech the microgrid is a constantly evolving project. Utilizing the new funding awarded by the State of Illinois, four new loops will be constructed starting in 2021, which will connect all buildings on campus via the looped system. Other upgrades have also been in progress to use more sustainable power sources on campus.

“We’re just beginning the process of installing new thermal generators on Mies Campus that are significantly more efficient and should be able to allow us to produce electricity more reliably and at a lower cost,” says Shahidepour.

Shahidehpour has also been involved with a range of initiatives to reduce electrical power use on campus overall. This includes installing wireless and renewable energy-based LED lights in high-use areas such as Keating Sports Center, adding LED streetlights throughout most of Mies Campus, and outfitting campus with intelligent sensors in both the grid itself and the devices it powers, such as building LED lights and electric vehicle charging stations. They are optimized to increase energy efficiency on campus and to reduce electrical power use overall.

“I think this is just the beginning,” says Shahidehpour. “Now the whole world is interested in microgrids.”

Photo: An illustration of the Illinois Tech microgrid (with each loop a different color), including the four new loops that will be added over the next two years (provided)