Illinois Institute of Technology Associate Professor Carrie Hall has created a new computer model that can enable diesel engines to run on alternative fuels with just a software update. 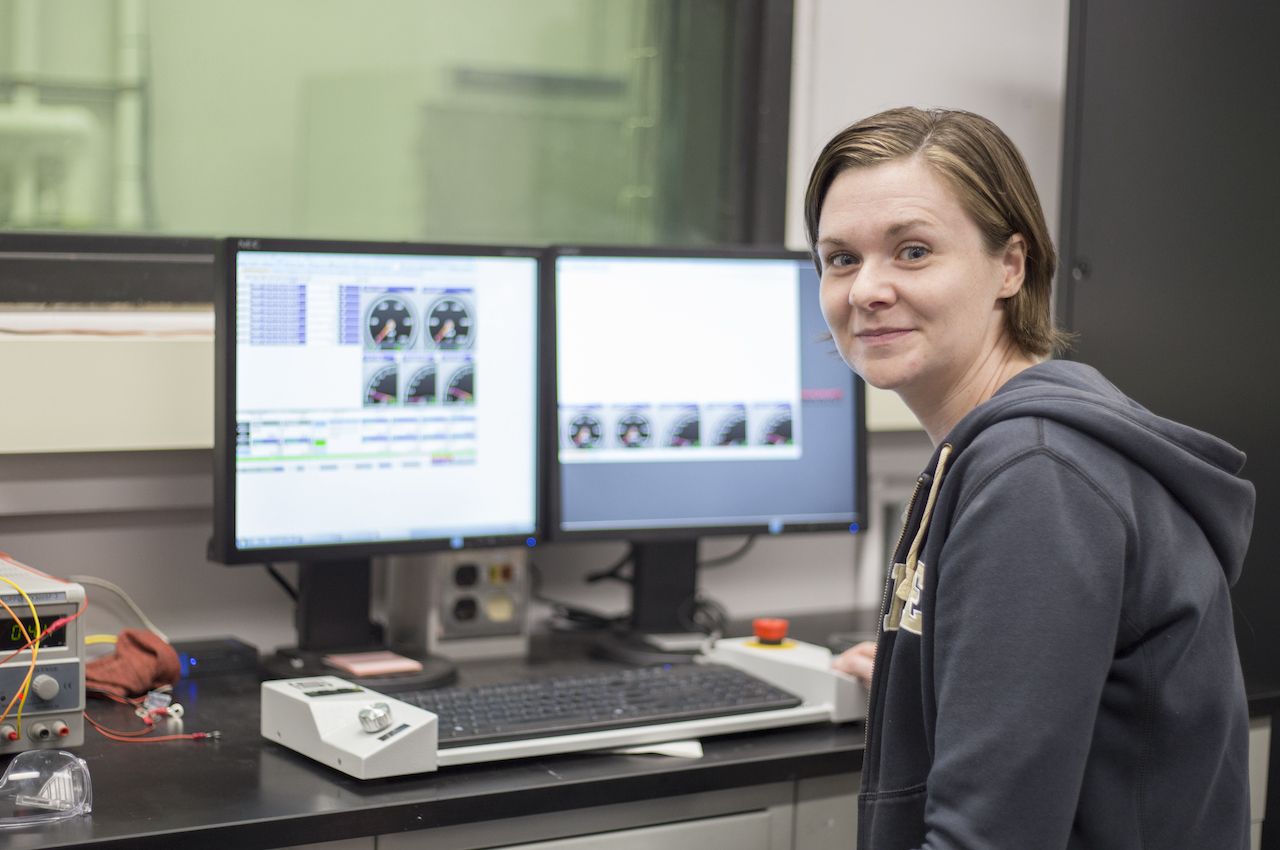 Behind the glitz of electric cars is a transportation sustainability problem yet to be solved: large vehicles like long-haul trucks and airplanes are still very challenging to electrify.

Illinois Institute of Technology Associate Professor of Mechanical and Aerospace Engineering Carrie Hall says alternative fuels may be a viable solution, but it’s not as simple as topping up existing engines with the latest biofuel. Engines are designed with a specific fuel—usually gasoline or diesel—in mind.

Hall has created a new computer model that can help enable diesel engines to run on a different fuel with just a software update.

“Since we are focusing on a software upgrade, somebody can actually put that into their vehicle without incurring a lot of extra costs,” she says. “They’re not really going to have to change the hardware on their vehicle.”

As a first step she has applied it as a possible intermediate solution for trucks moving away from diesel.

“There’s an anticipation that with electric vehicles being more common for passenger cars in the United States that there’ll be a lot of extra gasoline that’s not getting used. That gasoline can be used on heavier-duty vehicles. That’s a strategy that’s still being explored,” says Hall. “Making engines smart enough to use a broader range of fuels also opens the door to other possibilities, such as using carbon-neutral or carbon-negative fuels.”

For heavy-duty trucks, which account for over a quarter of U.S. on-road vehicle energy consumption despite representing only 1 percent of on-road vehicles, improving efficiency is key.

“Everything that we’re doing is looking at trying to get to cleaner and more efficient vehicles,” says Hall.

She says that the one big obstacle to running a diesel engine on gasoline is the difference in reactivity.

Gasoline fuel injected into an engine cylinder normally won’t burn until the engine provides a spark to start the fire, and then the resultant explosion will travel uniformly away from the spark through the engine cylinder.

On the other hand diesel tends to spontaneously combust after it is compressed in the cylinder. When you try to run gasoline in a traditional diesel engine, the cylinder explosion may be unpredictable, or it might not burn at all.

The timing is essential as engine efficiency depends on running multiple cylinders in harmony.

“If fuel burns a little too early or too late, you don’t actually get all the benefit from it, and the efficiency is worse,” says Hall.

To understand how to get the most out of burning gasoline, diesel engines need real-time information on when the fuel has ignited.

If this was just any model, Hall could do detailed multidimensional fluid dynamics calculations. The catch is that in order for it to be a model that’s useful to engine operation it needs to run in real time, anticipating the time of ignition up to thousands of times each minute.

“Our models are used to provide some system feedback,” says Hall. “Understanding the timing of [fuel ignition] gives us an idea of how it was tied to something like fuel injection, which we then might want to adjust based on that feedback.”

Some engine control designers achieve speed in their model by utilizing machine learning techniques or storing large data tables to avoid model calculations, but Hall has taken a different approach.

“We’ve been trying to create models that are based on the underlying physics and chemistry, even when we have these very complicated processes,” she says. “Recently there’s been interest in using neural networks to model combustion. The problem is that then it’s just a black box, and you don’t really understand what’s happening underneath it, which is challenging for control, because if you're wrong, you can have something that goes very wrong.”

So instead, Hall began with the complicated version of the calculations and explored ways to simplify them until she found ways to describe the science with equations that were faster to solve, while still achieving the industry standard of accuracy for control models.

“We’ve tried to capture all the underlying effects, even if it’s in a more detailed way than we know we’re going to really be able to use for real-time control, and let that be our reference point. Then we simplify it down by using things like neural networks strategically, but we keep this overall structure so that we understand what each piece means and what it’s actually doing inside there,” says Hall.

The result is a more adaptable model. While a pure machine learning approach needs to be completely retrained for each new fuel, Hall can simply update some parameters that correspond to measurable fuel properties.

This is key to Hall’s research, which explores a range of fuel options. She has done work on novel fuel ideas, such as fuel blends, and she is a member of a collaborative group that was recently awarded $2 million by the U.S. Department of Energy to test novel applications of a low-carbon fuel called dimethyl ether.

Hall’s control model, which Illinois Tech Research Assistant Professor Michael Pamminger (Ph.D. MAE ’21) worked on as a student in Hall’s research group, is one piece of a larger project to figure out how to use gasoline in diesel engines and was conducted in collaboration with Argonne National Laboratory, Navistar, and Caterpillar.

“We’re working with those companies to try to help them understand the underlying combustion processes, but then also to build tools that they can potentially fold into their own software, and then enable their next generation of engines to use these fuels and use them well,” says Hall.