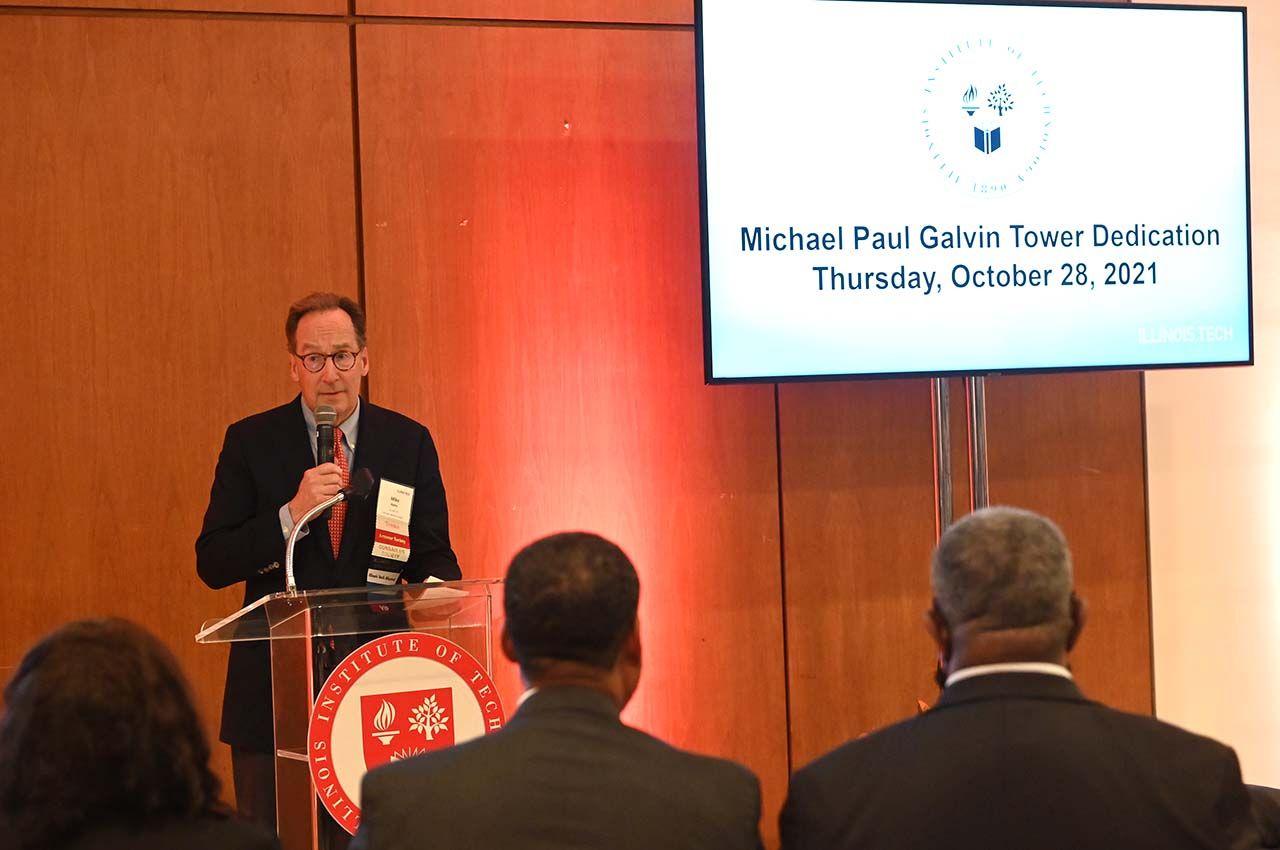 In recognition of Illinois Institute of Technology Board of Trustees Chairman Michael P. Galvin’s long-standing support and his integral role in shaping the vision and future of Illinois Tech, IIT Tower is being renamed Michael Paul Galvin Tower. Galvin’s investment in Illinois Tech includes a landmark $50 million gift to support Chicago-Kent College of Law, the Robert W. Galvin Center for Electricity Innovation, and the university’s strategic priorities among other initiatives.

“Illinois Tech and its mission of liberating the power of difference to advance technology for all could not be more important for Chicago and the nation,” Galvin says. “For more than 130 years, Illinois Tech has made it possible for all young people—regardless of means—to discover, create, and invent solutions to many of the world’s most pressing challenges. I’m proud to play a role in making sure Illinois Tech continues that legacy while helping build an even brighter economic future for this great city and the world.”

Galvin (LAW ’78) is an alumnus of Chicago-Kent College of Law and a longtime member of the Board of Trustees, of which he has served as chairman since 2018. He was a co-founder of Harrison Street Real Estate Capital, and is president of the Galvin family holding company for its majority-owned and actively led private equity and venture capital enterprises.

Lauded for his relentless drive toward continuous tech innovation, his operations acumen, and his dedication to public service, Galvin previously served under former President George H. W. Bush as assistant secretary for export administration for the United States Department of Commerce. In that role he worked to reformulate and renegotiate post-Cold War strategic trade policies following the collapse of the former Soviet Union and the Warsaw Pact. Earlier in his career, Galvin was a corporate finance transactions partner at Winston & Strawn’s Chicago office.

As one of the most important philanthropists in Illinois Tech history, Galvin has supported countless strategic priorities and initiatives for the university. He helped establish the Robert W. Galvin Center for Electricity Innovation; has given extensively to scholarships across the university, including the Michael Paul Galvin Endowed Scholarship and the Elizabeth and Michael Galvin Endowed Scholarship; and has recently established the Michael Paul Galvin Chair in Entrepreneurship and Applied Legal Technology.

“Through his leadership, dedication, and generosity, Michael Galvin has made a profound investment in our continued role as Chicago’s tech university,” says Illinois Tech President Raj Echambadi. “Michael has made a significant impact as a business leader, and as a part of continuing our legacy and university’s founding mission to provide unmatched opportunity and value to all young people in Chicago.”

Galvin served on the Board of Trustees’ Executive Committee prior to becoming chair. He has also served on the board’s Strategic Planning and Campaign Planning Committees, and is a member of the Chicago-Kent Board of Advisors.

Galvin is also passionate about his involvement with the Vail Veterans Program as a donor, volunteer, and board member. The organization takes wounded (amputee) military veterans snow skiing to help them experience what they can overcome, achieve, and look forward to doing in life.

Galvin is the son of Mary B. Galvin and the late Robert W. Galvin, an icon in innovation for his generation-defining leadership at Motorola and as an Illinois Tech University Regent who served on the Board of Trustees from 1953 to 2011, including serving as chairman from 1979 to 1990.

“Mike Galvin’s unique understanding of and appreciation for advancement is inextricably woven into Illinois Tech’s success,” says Ernie Iseminger, vice president of advancement at Illinois Tech. “He is a wonderful partner and tremendous leader, sharing deep knowledge of and respect for what philanthropy can do to make a transformational difference at Illinois Tech as we continue to move forward.”