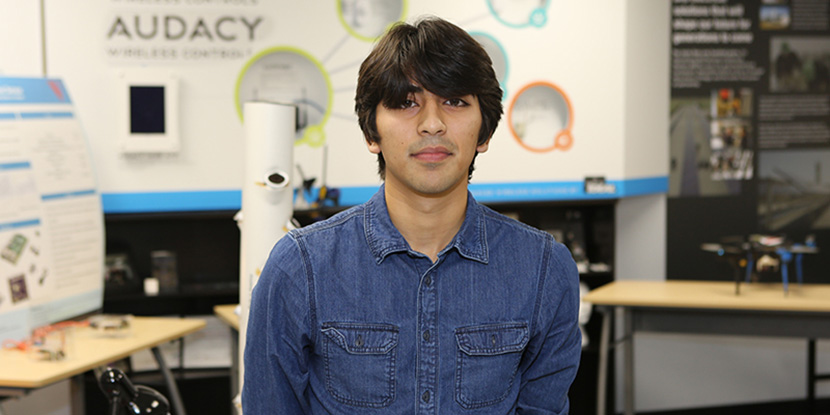 As an Information Technology student and a person very much interested in Art, it was easy for me to be hooked by Digital Art. Project Aura was an idea that stemmed from my passion for Technology and Art. Project Aura is a device for people like myself that are Web Designers, Mobile Application Developers, User Interface Designers, User Experience Designer, and Graphic Designers can all benefit from Project Aura. An Aura is the distinctive atmosphere or quality that seems to surround and be generated by a person, thing, or place. That is exactly what this device intends to capture, the feeling in a particular moment. When using this device, you can essentially get the mood of any situation much like you can with a photograph. This paper discusses the inner-workings of project aura, what it does and a comparison to other similar devices. Project Documents are located in the GitHub Repository (https://github.com/illinoistech-itm/aura)

The world is a big place with more colors than anyone can imagine. Project Aura was designed to take any color in the real world and turn it into values that computers can read. Values that can be used in web pages or any other form of digital art. The device contains a color sensor, a Bluetooth le module, and an Arduino Uno Board. The user connects their Project Aura device to their Mobile Device via Bluetooth. Once the two are connected, the user controls when the device sends it a new color, thus offering the user complete control of what and when he/she can scan. For example, if a user is walking their dog on a beautiful autumn afternoon and their attention is suddenly directed to a radiant red leaf. The user brings out the Project Aura Device and opens the Mobile App. The device is placed over the color sensor and the control on the user application is evoked. What the user receives on the screen is then the hexadecimal color value of the leaf. Later I will discuss the inner-workings of the device and why things work the way they do. As well as reasons for selecting particular modules over alternatives.

I have mentioned that Project Aura is designed to capture the feeling in particular moment. This leads us into areas such as Color Theory and Psychology. Designers are very familiar with borrowing findings from other fields like Psychology. They use scientific theories of how the brain works and use these findings to lure customers. Whether it is ethical or not, is a discussion for another day. Color Theory is the “science behind our emotional connections to color.” No doubt that colors can evoke different emotions. For example, warm colors like red, orange, and yellow are “generally energizing, passionate, and positive.” In theory, with Project Aura the color the users scan will be a direct reflection of the mood at that moment. Let’s take the example from before, the user scanned a vibrant red leaf. That user will now relate the color of the leaf with the mood that beautiful autumn afternoon when he/she was walking the dog.

Project Aura functions because of the teamwork of a few pieces of electronics. The devices used include the following: an RGB Color Sensor with IR filter and White LED - TCS34725 from Adafruit, Bluefruit LE - Bluetooth Low Energy (BLE 4.0) - nRF8001 Breakout - v1.0, an RGB LED, and an Arduino Uno microcontroller. The device also uses other electrical components for connections to be made and power to be distributed. These include jumpers and resistors. The Fritzing diagram located in the GitHub repository ( https://github.com/illinoistech-itm/aura ) shows how electrical circuitry of the device.

The color sensor is an integral part of this project. The device includes “an IR blocking filter … that minimizes the IR spectral component of the incoming light and allows color measurements to be made accurately.” The module has a dynamic range of 3,800,000:1. This is the ratio of the largest to smallest value that the color sensor can see. Which means that it can sense many colors.

Another Integral part of the project is the Bluetooth le module. The Bluetooth breakout is the device that connects the Project Aura device to the Mobile phone. The device works by using universal asynchronous receiver/transmitter (UART) service. ACSII data is sent back and forth between devices. In our case the Project Aura device and the Mobile device.

The RGB LED is an LED light. The device can display a wide array of colors. RGB color values can be passed into the RGB LED. The LED then does its best to display the correct color.

Another device is an Arduino Uno which is a microcontroller or a small computer. Arduino is an open source platform that includes an Integrated Development Environment (IDE) to create software. Code is uploaded to the Arduino Uno from the IDE. This code is what will control the other two Modules.

In order for the device to function properly, an electrical circuit needs to be created to allow for power to flow to a device. Connections need to be made and power needs to be distributed. The Fritzing diagram, located in the GitHub repository ( https://github.com/illinoistech-itm/aura ), shows the electrical circuitry for this device.

For this prototype, a breadboard was used. A breadboard is a board that is used to make electrical circuits. Breadboards are especially used for experimenting since they are solderless and allow for easy changes in circuits. First, power needs to be passed to the breadboard from the Arduino. This is accomplished by connecting jumpers from the ground and 5 volt pins on the Arduino to the Ground and Power strips on the breadboard. The RGB led, Bluetooth module, RGB color sensor were placed on the breadboard.

The RGB Color sensor was used as the data collection device. It was the device used to gather the data needed to reach the goal of capturing a color and receiving computer friendly values. The device contains a TCS34725 color sensor. The sensor detects RGB and Clear light. The component is used by placing an object over the sensor while the LED is on. The LED on the component, is used to control the LED to illuminate the object the device is sensing. The component creates values from the light that is reflected back to the sensor. SDA and SCL pins are used for serial communication since the device uses I2C to communicate. SDA is the data line and SCL is the clock line.

Presenting people with color values is a very important part to this project. For presenting data to the user, a mobile phone application and an RGB LED was used. The Mobile application used is Bluefruit, an application from Adafruit. The application contains functionalities that help control the Arduino device via Bluetooth. It contains an UART monitor which is used to communicate between the Arduino device and the Mobile device. UART stands for Universal Asynchronous Receiver/Transmitter. It is a Bluetooth service that allows for ACSII data to be sent to and from the device. Data from the Arduino was sent to the mobile device that contained color value information. The user decides when the device sends a new color through the application. If the user sends the letter “a” in the serial console, the device sends it new color values.

There are many colorimeters that are mostly used for scientific purposes. The Project Aura device is designed for a different purpose and intended for a much broader audience. While the product is still in its prototype phase, the goal is to attract an audience that will want to use the device for fun. A custom application, social media integration, and a lot more work will turn this idea into a possibility.

Earl, B. (2015, May 4). Adafruit Color Sensors. Retrieved from Adafruit: https://learn.adafruit.com/adafruit-color-sensors/overview

Townsend, K. (2015, May 4). Getting Started with the nRF8001 Bluefruit LE Breakout. Retrieved from Adafruit: https://learn.adafruit.com/getting-started-with-the-nrf8001-bluefruit-le-breakout/related-links