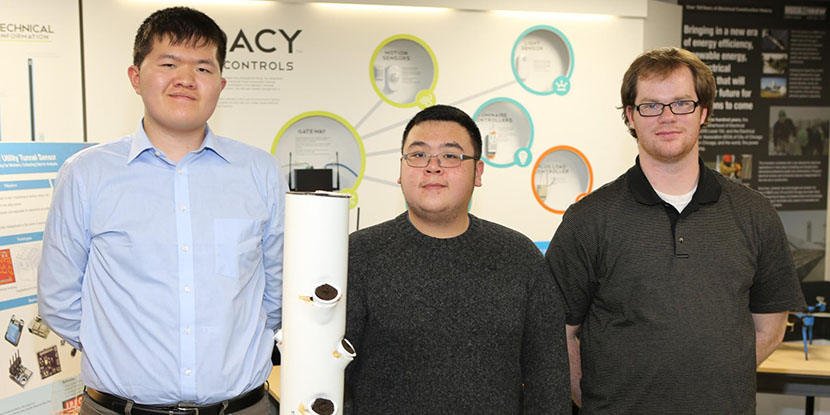 EcoTower takes Hydroponic farming to the next level by using technology to self-regulate plant growth. Hydroponics is the science of giving a plant the necessities for growth and longevity. Hydroponic farmers are able to control the nutrition, supply of water and sunlight, in the amount that the plants need. This ensures that plants grow as healthy as genetically possible. Hydroponics plants are grown in an inert Rockwool dirt growing medium. Rockwool dirt consists of basalt rock and chalk for its nonabsorbent properties which allows water to flow through and hold nutrients for the plants. Carefully monitored pH adjusted nutrient solution is used to nourish the roots in a highly soluble form and allows the plants in hydrofarms to take its food without the roots putting into much effort to search out the nutrients and extract them in regular soils.  Thus, the plant has more energy that can be used for growth and vegetation.

A software application is used for wireless communications from the EcoTower to a mobile device. This allows for control of the functions of the tower from a distance. The original plan was to use wifi via the wifi shield kit for Arduino, but we opted to use the Bluetooth addition instead. The technology we used to do the Bluetooth is Adafruit Bluetooth LE, alongside its complimentary app Bluefruit. This connection assigned all functions to buttons and displays, so that we can both monitor and control the tower.

The EcoTower used is solar as a renewable energy source. By utilizing the sun through solar panels, the tower was able to get sunlight during the day while charging its battery. During the night the battery powers the Ultra-Violet lamp for night operations. This way the EcoTower maintains a cycle of energy that will supplement the plants continuously, day or night. This tower aims to create an autonomous hydroponic environment that can be monitored, is self-sufficient, and controlled through applications. Data is collected from the tower, transmitted to the software application, and then presented for the user’s use of data. The use of electricity is also important to the project since the solar panels and batteries can only simultaneously power some applications for the tower. This creates the need for controlling when power is needed at what time, through timers, low energy hardware, and switches.

The Hydroponics tower needs to be monitored for the data that it outputs. Information like the pH levels and the total dissolved solids play an important role in plant growth and its health on vegetation. The pH is tested using a meter that specifically gauges pH in a solution. The total dissolved solids is monitored through testing the water for its purity and conductivity. We needed to control water and light management from the tower. The water and light application is controlled with a timer set by the user which runs continuously until the user manually triggers them. The pump and the lamp are controlled by a switch which is connected and manipulated by the Arduino. All the controls are sent to the Arduino as inputs and outputs, while monitored applications are analog. The software we used to bridge the tower to the user was Bluetooth. Adafruit provides a Bluetooth Low Energy solution that was put on the central hub of the EcoTower which consists of the switches made for water and pump, and also the pH tester and total dissolved solids meter. This allowed all data to be transmitted to the user’s phone and also give commands to the tower. A Bluefruit application is used to monitor and control the tower. The analog data is presented and switched were manipulated accordingly.

Difficulties that this project faced were wiring, connection, leakage, and coding. The wiring for Arduino consists of many connectors (Male-male > Female-male [x3]), thus making the connections very weak and prone to disconnect at multiple points. Having the Arduinos inside boxes and waterproofed, makes it a challenge to pull out the central hub and place it back without disconnecting the wires. Tapes and elevation for the central hub assistes the need to reach in tight spaces to pull or put wires. To make the tower wireless would make the project stationary as the set needs to be connected to an Ethernet cable. A solution is to use Bluetooth as the “wireless” communicator.  Although the process disconnected when idle, and requires a re-upload of the code to enable Bluetooth access, the EcoTower responded well to the module over some distance. The tower also had leakage when there were open spots wherever plants were supposed to be. The holes were then filled with temporary cups and the openings were superglued to contain the water. Another difficulty we faced was coding a custom app for the Bluetooth. Bluefruit is open source but due to time and difficulties, the EcoTower team could not reformat the app for personal use. The Bluefruit app itself served the functions required for the EcoTower, so many other issues were the priority.

Functional Working Process:
The EcoTower is a project with one sole purpose in mind, and that is to grow food wherever you want. From that one goal, we thought of the best way to do that by providing a working prototype that is energy efficient, that can collect data for the user, and that can present the data in a simple and easy manner. While there were a lot of hiccups on the way to accomplish this, the goals were achieved and we created a working prototype for home use.

The EcoTower is pretty simple and easy for household use. First the solar panels on top of the tower collect energy that power a battery in either of the transistor boxes. The energy can power either of the Arduinos used in the prototype. The first Arduino powers a switch that runs a timer that regulates when the pump turns on or off. This switch is Bluetooth and connects so individuals can either turn on or off the Tower by connecting the Tower to their phones. The other Arduino in the prototype is connected to a TDS probe and a pH meter. This reads the water in the bucket to monitor the condition of the water and determine whether the water needs more nutrients and regulates the acidity of the water. Monitoring occurs via Bluetooth or a 4 char display on the lid near the solar panels. Since the project is a prototype, we didn’t completely work out the issues in the code. However, this allows the user to get a reading of the condition of the water and allow them to best service the tower.

The issue of power consumption is a problem that we faced early in the project. We had to determine the power needs of the EcoTower so that it could function properly. The project requires powering not one, but two Arduino’s and a pump powerful enough to pump the water to the top of the four and half feet tower. Since our goal is for the tower to be self-sufficient we choose to use solar panels as our source of energy. Solar power requires the EcoTower face sunlight.

The power from the solar panels goes to a transformer that both charges a battery and to power a USB port. The battery is required to store the energy since the solar panels are useless at night. We chose a USB port because from that port, we connected it to one of the Arduino’s and the cord is a USB adapter.

The biggest issue is powering the pump. We overcame this by instead of making the pump run on solar energy, we had it run on regular AC, but we put the pump on a timer so that it wouldn’t have to run all the time. This allowed the EcoTower to be as energy efficient as possible while ensuring the functionality of the Tower remained intact.

Examples for companies and products that work in the fields of hydroponics and things alike:

Additional ideas for adding to the EcoTower for future groups is to include additional sensors outside of the tower to monitor the environment for weather issues. For example, if there is rain outside, stop the timer for the pump so that the plants do not die from drowning in liquids. Or, if there is not enough sunlight for the ideal plant growth, turn on the Ultra Violet lamp to adjust accordingly. The EcoTower also requires users to mix in the required nutrients when it is depleted. Adding in an autonomous nutrient dispenser and mixer would better the independency of EcoTower. Another addition is to access the Bluefruit open source app to be customized for this specific project’s needs, while also having online capabilities. That way information is kept in databases to be viewed for graphs or comparisons with other users.