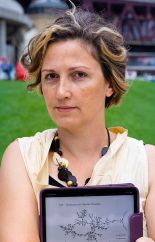 ​​Sonja Petrovic is an Associate Professor in the Department of Applied Mathematics, College of Computing, at Illinois Institute of Technology. She is a member of the statistics, discrete math, and computational math research groups.

Sonja is an "architect of the invisible" - to quote an inspiring colleague, Maria Villalobos Hernandez. As a mathematician and a statistician, she spends her days discovering, studying, and modeling structure in relational data we encounter in our daily lives.

Her research is in nonlinear algebra and nonlinear statistics. She develops, analyzes, and applies statistical models for discrete relational data such as networks. Sonja also studies randomized algorithm approaches to computational algebra problems whose expected runtimes are much lower than the well-known worst-case complexity bounds, develops probabilistic models to study average and extreme behavior of algebraic objects, and uses machine learning to predict and improve the behavior of algebraic computations.

Prior to joining Illinois Institute of Technology in 2013, Sonja was on faculty at Penn State Statistics. In 2015 she became an Elected Member of the International Statistical Institute (ISI), and received the College of Science Dean’s Junior Research Excellence Award, and in 2018 the College of Science Excellence in Teaching Award. Her research has been supported by the NSF, AFOSR, and DARPA. Sonja actively mentors and involves students in her projects.