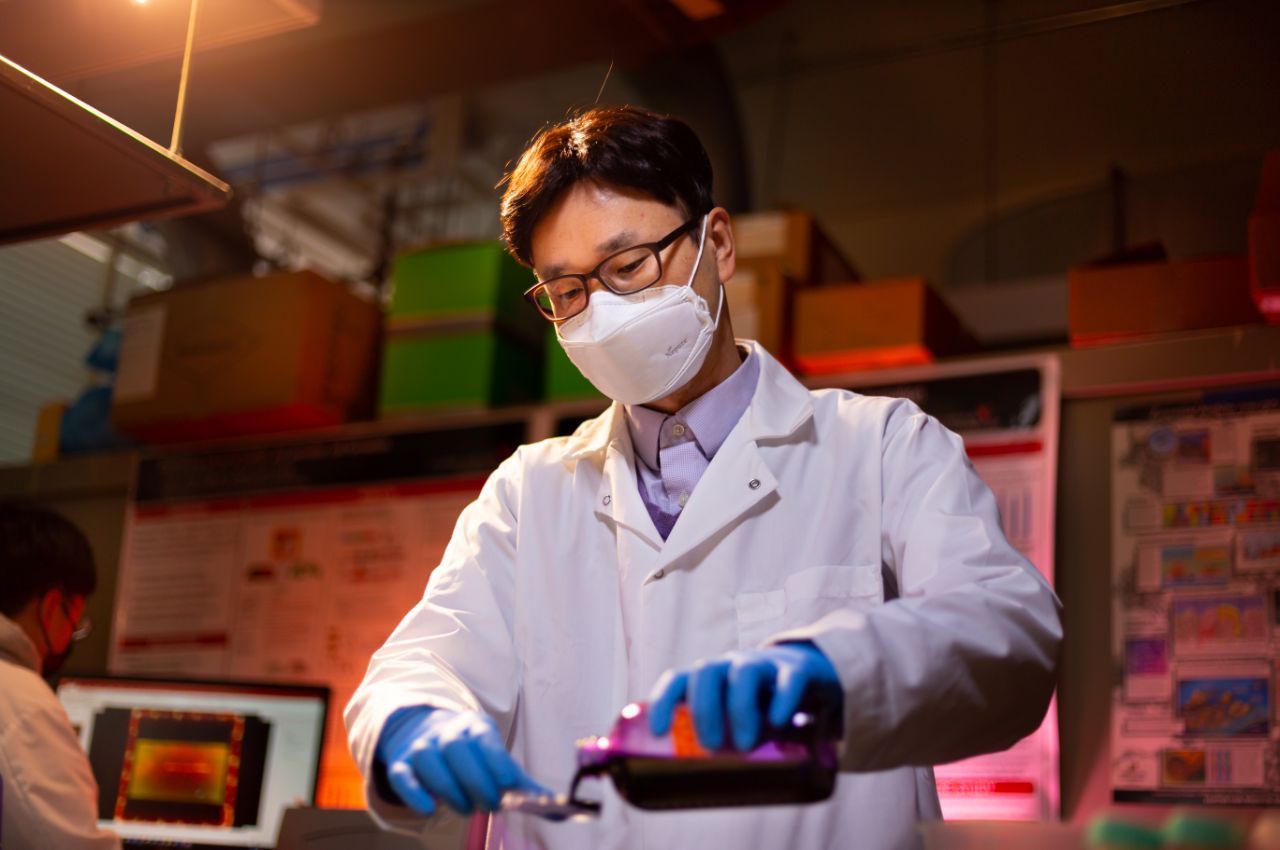 Healing a wound is a matter of waging war: as bacteria congregate and multiply on the wound surface, preventing healing and causing infections, doctors can apply an army of antibiotics and antimicrobials to try to kill the bacteria.

But bacteria are evasive. They’ve adapted their behaviors to be resistant to these attacks, leaving some patients suffering from chronic and even life-threatening infections with no available treatment.

Chronic infections affect 2 million United States residents annually and cause 200,000 deaths, and the annual cost of treatment is in excess of $18 billion.

Now Seok Hoon Hong, associate professor in the Department of Chemical and Biological Engineering, has engineered a “spy,” armed with a new weapon, that he hopes to use to infiltrate the bacterial ranks.

The most resistant bacteria are those that gather into a safe community. Gathering bacteria can secrete a sticky material that keeps them glued to each other and the wound while also providing defense by making it harder for antibiotics to get inside. This is known as a biofilm, and it has been identified in up to 80 percent of chronic infections.

But the most dangerous adaptation of the bacteria cuts right to the heart of how antibiotics function.

“The majority of conventional antibiotics inhibit bacterial growth. However, inside a biofilm, instead of continuing to grow, the bacteria can go to sleep. Such dormant cells are called persisters,” says Hong, who has multiple ongoing biofilm-related projects funded by the National Institutes of Health and the National Science Foundation. “Without growing, antibiotics cannot kill the bacteria. Then later, once the antibiotic levels decrease, the bacteria can grow again. If cells don’t form the biofilms, they are easily killed by conventional antibiotics, but I want to kill those non-growing, or the sleeping, bacteria.”

Hong recognized that the best solution to this problem would be twofold: It needs a new weapon to kill the bacteria even when they are dormant, and it needs to be able to work its way into the biofilm to get access to all the bacteria.

To find his weapon, Hong considered the range of bacteria-killing options beyond conventional antibacterials, and when he came across bacteriocins, a type of antimicrobial protein, he realized he had found the perfect candidate.

While generally not as good at killing bacteria as antibiotics, the mechanism that bacteriocins utilize to kill bacteria means that they can get around bacterial defenses: Instead of relying on cell growth, bacteriocins bash open the cell membrane or degrade the genetic material of the bacteria—awake or asleep.

Plus, bacteriocins have the added advantage of being targeted, meaning their design determines which kind of bacteria they can kill. This means that by design they will only go after the targeted pathogenic bacteria while leaving good cells alone, meaning there is no collateral damage.

With a new weapon in hand, Hong still had to figure out how to get the bacteriocins into the biofilm. For this, he came up with the idea to engineer a spy that could integrate into the bacterial community just to turn around and pump out bacteriocins, eradicating the infection-causing bacteria.

The spy? Escherichia coli, more commonly known as E. coli, a bacterium infamous for causing food poisoning but one that has become an invaluable chassis for genetic engineers who have found they can modify the bacteria to suit their own purposes.

“Then, engineered E. coli and the pathogenic bacteria can mix and form the biofilm together. However, while the biofilm grows, the E. coli can produce and secrete the antimicrobial protein and effectively kill the pathogenic biofilm bacteria,” says Hong.

In September 2021, Hong’s paper showing proof of concept results of this idea was selected for publication in the Futures Issue of the AIChE Journal, an annual issue that highlights “pioneering early career research.”

As described in the paper, Hong turned E. coli into bacteriocin factories capable of wreaking carnage on biofilms.

To do this, he needed to give the E. coli a set of instructions for how to create the bacteriocin proteins. He also needed to set up a control circuit that would allow him to tell the E. coli when to produce the proteins.

All of those instructions needed to be written in a language that the E. coli could interpret: the language of genetic code.

“In principle, if you design a genetic circuit based on the knowledge you get from a textbook, the genetic circuit should work,” says Hong. “But in many cases, the circuit doesn’t work well, and we don’t know the reason exactly why. Sometimes we need to go back and change the actual DNA sequence. Sometimes we need to change the genetic parts of the DNA. So it requires some optimization, but in the end, we found circuits that are working well for our experiment.”

With the genetic modifications in place, Hong could see that when he triggered the genetic circuit by sending the E. coli a chemical signal, it was able to make the bacteria-killing proteins, but those proteins were still mostly trapped inside the E. coli.

So Hong developed a second genetic circuit that, when triggered by a second chemical signal, would spew those proteins out into the biofilm and decimate the target bacteria.

The whole process took a lot of experimentation.

“In our initial trials, it was very difficult to find out what concentration of chemical signals to turn on the protein production and to turn on the protein secretion,” says Hong. “If the protein production is very high, sometimes it’s a burden to the cell growth. So, we wanted to find the condition to make the cells grow well and healthy while producing the antimicrobial proteins. Optimizing the chemical concentration was challenging.”

For this proof of concept, Hong engineered his E. coli to make a type of bacteriocins called colicin that would selectively kill a second strain of E. coli cells with a target receptor while leaving all other cells in the biofilm alone.

In the end, Hong produced results that show the modified E. coli can cause significant damage to a biofilm by eliminating almost all of it under conditions where conventional antibiotics would be unlikely to do any damage.

“We showed our engineered E. coli producing the antimicrobial protein is very effective to inhibit or to kill the target biofilms,” says Hong.

Now that he has shown the idea works, Hong has been working on creating new versions of the E. coli that can produce novel bacteriocins that target common antibacterial-resistant infections. He already has preliminary results targeting Pseudomonas aeruginosa, a well-known bacterium that can cause a range of blood, lung, and other infections. More than 60 percent of adults with cystic fibrosis suffer from Pseudomonas infections.

He also has plans to target Staphylococcus aureus, the bacterium behind staph infections, which is capable of causing sepsis, pneumonia, heart failure, and more.

It’s the kind of high-impact work Hong has become known for in the field, as recognized by the United States chapter of the Korean Institute of Chemical Engineers (KIChE), which honored him with the 2020 KIChE President Young Investigator Award for his research and exceptional potential for leadership in the field. He also was recognized by the Industrial and Engineering Chemistry (I&EC) Research journal as I&EC Research’s 2021 Class of Influential Researchers.

Because bacteriocins kill bacteria in a target-specific manner without collateral damage to nearby healthy cells, they are expected to work well in environments such as the digestive tract, where there is a mixture of helpful and harmful bacteria and a need to develop a treatment that kills only the harmful ones.

While so far Hong has focused on health-related biofilms, he says this technique may also be applied to kill just about any bacteria.

Just as in wound healing, there are potential applications such as cleaning products or waste treatment plants where the goal is to eliminate harmful bacteria. There is also a range of bio-industrial processes that rely on growing and controlling bacteria such as fermentation or biofuel production where this technique could become a new tool used to make those processes more efficient.

Ultimately, this is a technique that Hong sees as working in conjunction with conventional antibiotics.

“In the situations where antibiotics work, they are very effective, but this gives us a way to intervene when antibiotics are not working,” says Hong.