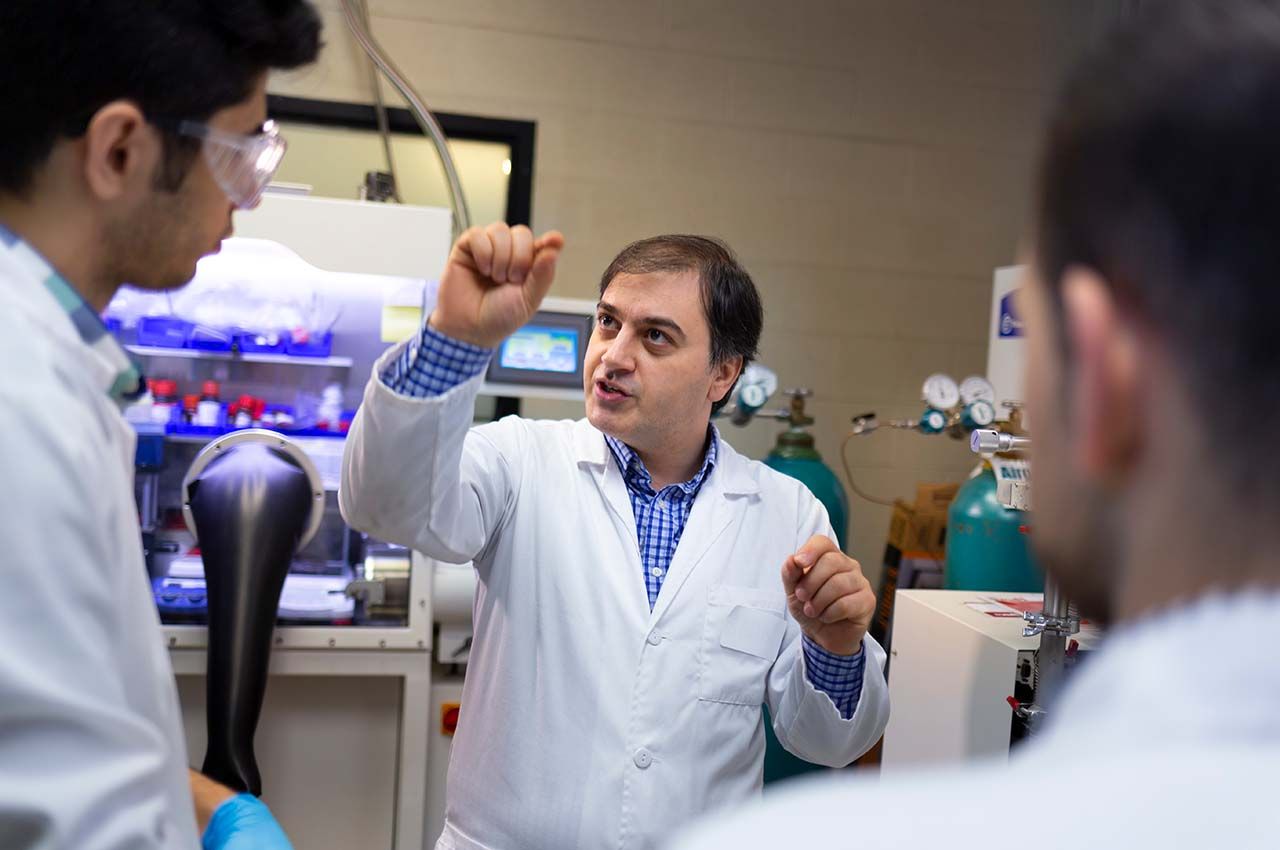 CHICAGO—April 20, 2022—Illinois Institute of Technology Assistant Professor of Chemical Engineering Mohammad Asadi received $1.9 million from the Advanced Research Projects Agency—Energy (ARPA-E) to scale up a process that he developed in the lab for capturing carbon dioxide directly from exhaust gas sources and converting it into valuable products. Carbon dioxide is one of the main greenhouse gases driving climate change, and the rate at which it is being added to the atmosphere has been increasing for decades, with much of it originating at industrial sites such as power plants.

“Once we capture the carbon dioxide, we can convert it to other carbon-based products, such as ethanol, which is the main chemical behind many disinfectants,” says Asadi. “It has a billion dollar market. It’s one of those key chemicals used in many, many processes and applications.”

The process is centered on an innovative catalyst that Asadi developed. He has also received $546,868 from the National Science Foundation (NSF) to dig deeper into the science behind how the catalyst works, with the aim of optimizing its effectiveness and exploring whether utilizing the same technique may improve other common electrocatalytic processes.

Existing processes capture and convert carbon dioxide in separate steps. Asadi’s catalyst revolutionizes this idea by facilitating both the capture and conversion in one step, drastically reducing the complexity of the process.

“We can basically eliminate all the costs usually associated with the capturing process, which includes transporting and storing the carbon dioxide before it gets converted, which is a really costly process. We expect it to reduce the cost of the process from the current price of $60 to $100 per ton to $40 per ton or less,” says Asadi.

While traditional catalysts for this process use costly metals such as gold, Asadi’s catalyst utilizes low-cost transition metals, modified with an organic compound that enhances the reaction.

“We use a very sophisticated multi-material catalyst with both metal and non-metal elements and with an organic material called a ligand. It makes the structure of the surface of the catalyst very sophisticated, carbon dioxide absorption very spontaneous, and carbon-carbon coupling fast, low energy, and efficient,” says Asadi.

Having shown it performs exceptionally well in the lab, with high reaction rates and efficiency, Asadi is ready to take on scaling up the process.

In studies so far, Asadi has found that the catalyst is highly selective for carbon dioxide and able to extract it without bringing impurities along. This is useful for creating a high-purity ethanol end product, whereas current versions of this process have to take time, money, and energy to purify ethanol in an additional step.

This process could eventually be used to stabilize the output from solar energy power plants by using it as a large battery, creating ethanol with solar energy when there is excess and burning the ethanol to create electricity during the night when solar output is reduced.

Asadi has also innovated lithium-air battery technology with the potential for similar applications as well as improving the performance of electric cars.

Illinois Tech Duchossois Leadership Professor, Professor of Physics, and Professor of Materials Science and Engineering Carlo Segre, a co-principal investigator on both the ARPA-E and NSF project, will be working on the reactor design and material characterization of the flue gas.

Segre will also conduct X-ray spectroscopy at Argonne National Laboratory as part of the effort to further understand the science behind how the catalyst works by monitoring changes in the electronic properties and near-surface structure during the reaction.

He says, “The in situ X-ray absorption spectroscopy studies we can perform using the Illinois Tech-managed Materials Research Collaborative Team (MRCAT) beamlines at the Advanced Photon Source make it possible to study the electronic and local structure of transition metal catalysts as they are active in the carbon dioxide reduction reaction. This provides an understanding of the fundamental processes that can help us design even better catalysts.”

In addition to further developing the process of converting carbon dioxide to ethanol, Asadi says he expects that learning more about the fundamental mechanisms that make the catalyst work so well will lead to benefits for other electrochemical processes such as nitrogen fixation and the oxygen reduction and oxygen evolution reactions, which could be improved by using a similar catalyst.