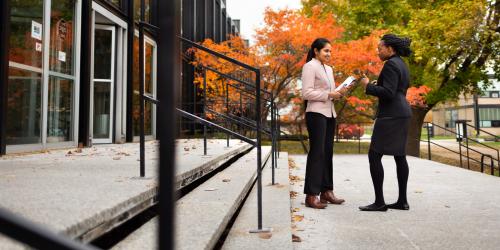 The Beta Gamma Sigma (BGS) chapter at the Stuart School of Business is part of an international honor society serving business programs accredited by AACSB International—the Association to Advance Collegiate Schools of Business.

Students are selected and invited to become lifetime members of Beta Gamma Sigma by the Stuart Beta Gamma Sigma chapter and an induction ceremony to honor new BGS members is held in the spring each year.

Beta Gamma Sigma members have exclusive access to various BGS services, including the global BGS Alumni Network and online career resources. Learn more about the benefits of BGS membership and reasons for students to join the world’s largest network of business school alumni.

Beta Gamma Sigma was founded in 1913 and became the exclusive honor society recognized by AACSB in 1921. Beta Gamma Sigma has over 875,000 members, selected from 600 chapters in AACSB-accredited business schools around the world.

The BGS chapter at Stuart School of Business was established in 2000 and is one of more than 600 active collegiate chapters. More than 600 members have been inducted into the Stuart chapter since October 2000.

Eligible students who have accepted membership into Beta Gamma Sigma will participate in an honors ceremony held in the spring semester. During the ceremony inductees will receive a framed personalized certificate, honor stole and cords, medallion, and tassel charm.

As part of the Beta Gamma Sigma Induction Ceremony, members will receive accessories to be worn with regalia upon graduation in May as part of the Illinois Tech and Stuart School of Business Commencement Ceremonies: